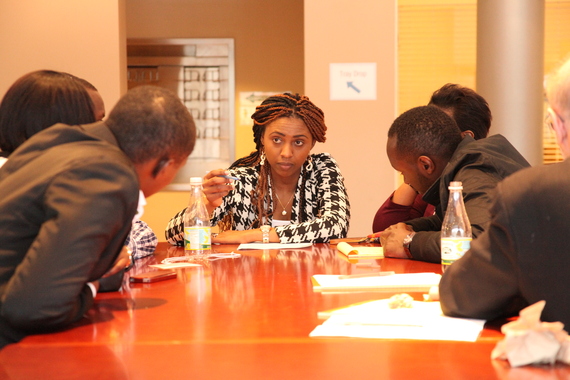 April 7-14 marks the 21st commemoration of the 1994 genocide against the Tutsi in Rwanda. As my Rwandan friends in Kigali have said this week, the rains have come, the preparations have been made. I sit in my home in Boston and imagine where I was this time last year. Saa kumi n'ebyiri z'igitondo, 6:00 in the morning, and I was already exhausted. The day would be long. I awakened to an eerie and mournful silence in Gishushu. I missed the hustle of the morning commute, gardeners, and motorbikes, that I soon learned to recognize as comforting sounds of normalcy in the city. Kwibuka, to remember. Ndibuka. I remember.

This year I am not in Kigali, I am in the United States. But I am still amazed by the Rwandan survivor community, even those who are not able to be in Rwanda during this mourning period. I want to share the story of the coldest winter in Boston since 1979, when a group of 40 Rwandan genocide survivors drove, flew, and traveled across the country to attend the first ever training program designed to empower them to find and use their voice for educational and advocacy purposes. They traveled from Utah, North Dakota, Maine, New Jersey, New York, Connecticut, Massachusetts, and New Hampshire. "How can we tell our stories while still grappling with finding justice for unspeakable crime of genocide committed against us and our families?" asked one survivor.

"I am here to tell you that justice can't happen without your testimonies," said Agent Andersen to the 40 survivors of the 1994 Rwandan genocide, who gathered at Harvard Law School on February 20-22, 2015 to attend the inaugural Survivors' Voice Program organized by the Genocide Survivors Support Network. The Genocide Survivors Support Network is a non-profit organization with a mission to help genocide survivors rebuild their lives and use their voice to contribute to genocide prevention. Investigator Thomas Brian Andersen Jr., a special agent with U.S. Department of Homeland Security in Boston, MA, has been the primary agent on the milestone Beatrice Munyenyezi case. On July 15, 2013 Munyenyezi was sentenced to 10 years in prison for lying about her role in the 1994 Rwanda genocide. Most recently, as identified in a Boston Magazine article, the federal court upheld Munyenyezi's original prison sentence. The Federal Judge said that, "the United States cannot be a haven for those who slaughter out of hatred and ignorance."

Agent Anderson was one of five distinguished speakers who participated in the Genocide Survivors Support Network's "Finding Your Voice" training workshop. The workshop was the first of Survivors' Voice Program training series. Bringing together Rwandan genocide survivors and expert mentors has empowered survivors to share their testimonies for educational and advocacy purposes. Participants shared their personal challenges with speaking publicly about their experiences, and how to overcome them. The support created between survivors was indicative of what Rwandans survivors can do when they build community and alliances in the United States. Moving from being a victim to living life as a valued member of society is challenging, and justice like the Munyenyezi case helps survivors heal and move beyond the victimization they often feel.

The Survivors' Voice Program marked a key transition within the Rwandan genocide survivor community living in the United States. The survivors discussed the benefit of coming to terms with which aspects of their story they feel comfortable telling and which aspects must remain private. Some survivors, however, were willing to sacrifice their comfort in order to promote justice for the departed and for future generations. Speaking about those who they have lost is a way to honor, mourn, and preserve their memories. One survivor mentioned that while justice will never be perfect, it is still important to strive to achieve justice through memory, testimony, and community. Some survivors spoke about anger, which stems from not getting the justice they deserve. Survivors learned to be inspired by others' stories rather than compare them, which created an open environment to share aspects of survivors' testimonies that were most important and poignant for them. Survivors adopted a personal definition of justice, where the collective sharing of testimonies protects this type of violence from happening to others.

We asked survivors before the workshop to write why they decided to attend. The answers ranged from "I would love to contribute to promoting non-violence in the world. We can educate the world based on the experience of what we went through." An older generation survivor mentioned, "The idea sounds wonderful, like something I have always wished we had." However, the most common answer was, simply, "I don't know how to tell my story." The Survivors' Voice Program therefore invited mentor speakers, including Richard Haynes, a survivor of American racism in the South, and Fred Manasse, a survivor of the Holocaust and Boston-based artist, to share their testimonies. Mentors from Rwanda and the United States coached survivors in the process of sharing difficult stories, stories of victimhood and horror, but also of the good times and family life before the genocide. We found that if survivors are not in a place of emotional comfort and safety, sharing will be more difficult. One survivor said, "Even if you give a good presentation, you have to go home and deal with it. You have to relive that story." This is why the community created by the Genocide Survivors Support Network can foster opportunities for survivors to be taken care of when they "go home."

The workshop was a community effort, as will be the 21st commemorations in cities like New York, Boston, and Washington D.C. The Boston community supported the survivors and made them feel at home. In addition to Harvard Law School, which provided the workshop venue, The Irving House at Harvard and the Harding House donated rooms for the survivors in Cambridge. Fragomen Worldwide hosted a Welcome Cocktail Reception for 60 Friends of the GSSN. Whole Foods Fresh Pond also donated catering. The connections made among "Grandpa Fred" and "Mr. Richard" are those that survivors lost before growing up, grandparents, inter-generational mentors, and models of overcoming hardship to lead successful lives.

Mentoring and personal successes that came from the workshop helped the survivors use their voices as a tool for change. There are different ways of telling stories, including through art, poetry, and direct testimony. The inter-generational mentors who survived different types of violence and genocide helped the survivors find personal justice, and expand their views of how their voices can impact society, despite the pain they may experience.

It is now the week of April 7, 2015, the 21st Commemoration of the 1994 genocide. This commemoration has provided the opportunity for survivors to meet again and to honor and mourn their lost loved ones. One survivor urged, "We must get together in happy times, too. While commemoration is significant in our lives, part of rebuilding is to enjoy our community more than once a year." While there are very few survivors left, the broader community and friends of survivors come to share in their mourning, even when survivors are the minority at these events. As one friend of survivors said, "It's a human story, and we are all a part of it, if you choose to be open."