One of the least known - and most beloved - works in the collection of Boston's Museum of Fine Arts has returned to offer her compassionate gaze to her many followers.

She is a 900-year old wooden Guanyin, a Buddhist bodhisattva of mercy, first displayed at the MFA back in 1920. She attracted hordes of quiet pilgrims until she suddenly went into storage in 1999.

"Even goddesses need a break once in a while," says Nancy Berliner, the MFA curator who created the one-room installation where the statue now resides.

The practically life-size sculpture sits in what scholars call "the pose of royal ease." She leans forward slightly, casually and slyly smiling as she rests on her perch, one leg dangling forward, a hand balanced loosely on her other knee. It's hard to think of any sculpture, from her times to ours, with such a relaxed pose.

She looks peacefully downward, in traditional Chinese fashion, watching the reflection of the moon in water only she can see. The message of where she focuses her attention: the moon's reflection is an illusion, is as all reality.

That contemplative mien was enough to captivate generations of Bostonians, who would come to the MFA to experience the sense of maternal comfort the goddess exudes.

And then, suddenly in 1999, the lady vanished, languishing, inaccessible for 15 years, in a storage room.

Berliner says that two years ago, a donor wanted to do something special for the MFA and wondered what might be an intriguing option. Berliner suggested paying for the conservation of the Guanyin, to which the patron quickly agreed.

It took 18 months for the goddess to get her groove back.
She was bathed in ultra-violet light, revealing a heretofore unseen inscription describing a prior restoration in China many centuries ago.

A fragment of the wood from which she was sculpted went under radiocarbon examination, dating the tree felled to create her to the period of 1033 to 1155 C.E.

The goddess endured her most recent sprucing up in 1956, when she was to appear in a "color television" program. An x-ray revealed that metal parts were added to her interior back then.

Her third eye? A plastic decoration. Plastic? On a goddess? Well, what do you expect from TV?

The MFA's conservator, Abigail Hykin, found the Guanyin sitting) in a pile of paint flecks. Hykin lovingly reattached each, after additional paint, determined to have been added over the centuries, was carefully removed.

The plastic decoration in her third eye? Ever so artfully dislodged.

A wood fungus, detected in the conservation process, rendering the old lady dry and fragile?
Replaced by inert material to stabilize her for the next 900 years.

The conservation process revealed layer after layer of gold and green paint applied through the centuries to keep the goddess looking her best. Positive karma attaches to those who restore statues of Guanyin, Buddhism suggests.

The role of Guanyin in Buddhist culture is to help people achieve nirvana. The name Guanyin actually implies "hearing the cries." A nearby painting depicts an 11-headed Guanyin, those extra heads permitting her to hear still more cries.

The appeal of this particular Guanyin, so strong in the Song Dynasty when she was created, remains undiminished in our times. On Chinese New Year, February 6, she met her public for the first time in 16 years. More than 7,000 visited the MFA, many of whom collected the karma that comes from experiencing the bodhisattva's gaze.

Why is she so appealing to moderns?

"She expresses compassion and empathy," Berliner says. "The Song Dynasty was a time of realism in art, a little bit like the European Renaissance. Images of deities become more and more human."

Not every Song artist believed in such precise reproductions of the human form, however. The contemporaneous critic Su Dongpo derided representations of the physical form. His opinion, Berliner suggests, presages our own era of abstract impressionism.

Surrounding the Guanyin in her new installation are fewer than 20 other pieces, including scrolls, dishes, and paintings, many of which followed Su Dongpo's dictum of attention to attractive brush stroke and calligraphy. One scroll was so attractive to a later Qing era emperor that he actually added his own calligraphic approval of the piece, visible to MFA visitors in the Guanyin's new digs.

Berliner chose to set off the Guanyin with such a small array of Song treasures in order to keep things simple and spiritual. The room could have been packed with dozens of high quality pieces, each competing for the attention of the museumgoer. Keeping it simple, Berliner believes, provides the visitor with a more enduring experience of the lady whose calmness reminds us that all is illusion.

Since the statue's return, Bostonians of a certain age have posted online of their delight and have told of the bond they enjoyed with the Guanyin in decades gone by.

Now the goddess has begun a new era of soothing her visitors' souls. If you're passing through Boston and your heart is heavy, come gaze upon this gorgeous Guanyin. You might even make it a habit; you will hardly be the first. 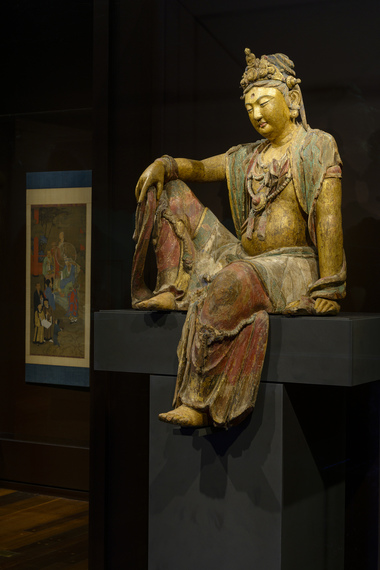