How young is too young for Botox? We're hearing more and more stories about young women getting "preventive Botox," so we reached out to one who has tried the wrinkle-stopping treatment: 24-year-old Danielle Dunsmuir, a surgical technologist and medical assistant at Advanced Surgery Center in New York. We asked her why she started Botox (along with lip injections) in her early 20s. Here's her story.

Danielle Dunsmuir: "I've been working in the doctor's office for two years, and basically since I started working here I've thought about getting Botox. I had lines on my forehead. Even when I put on my bronzer it would lay in my lines. And I was told it could also be preventive. A lot of people say that if you start younger -- in your 20s, 30s -- Botox or Dysport [an alternative anti-wrinkle injection on the market] actually helps you in the long run. My family and friends were saying it's unnecessary and you don't really need it. But I think because I'm around it so much, I don't really think that. Afterward, my family couldn't even tell whether I had it or not. I definitely liked it when I put my makeup on. It's a lot smoother. I'm going to keep doing it. It's so natural.

Once it's around long enough, people will see that that it's preventive; that people who got it when they were younger won't really need a facelift when they're older. I think it will definitely become a trend. I think getting it in your teens is definitely too young -- unless it's for underarm sweat, I think that's acceptable. I don't think there are any lines to correct when you're a teenager. Some people get gray hair in their 30s. It just depends. I don't think it's absurd that people start to see lines in their late 20s.

I also got filler in my lips. When I smiled a lot of my top gum-line showed. I wanted fuller lips to hide my gums. So Dr. Fiorillo put Restylane in my top and bottom lips, and that made me feel more confident. I felt like I was smiling more in pictures because I didn't have that gummy smile. With my smile it's dramatically different; I think with that, people noticed.

Plastic surgery is definitely more accepted now. People are admitting to it more now. I would definitely have other procedures later. After I have kids I would have a tummy tuck. I would do all that. I do get criticism for being too young. People ask me, 'Well what have you had done?' I tell them I've gotten Botox, and they say, 'You're too young.' But if I had never told them, they wouldn't have known."

We also wondered how her boss, board certified plastic surgeon Dr. Michael Fiorillo, felt about administering the treatments, and asked his point of view on the increasing trend of women in their 20s getting injections. We also asked him specifically about Danielle's reasoning that Botox was preventive. We wanted to know if there was a definitive answer to this idea. 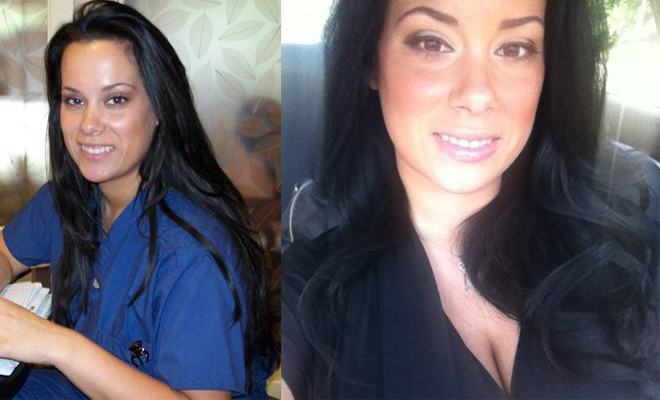 Dr. Michael Fiorillo: "I don't really like to inject it on young people too much. I do have a lot of young girls that will do it for sweating under the arms. And some guys, too. So that's pretty common. I have some high-schoolers, late teens, early 20s. I do have some some young adults doing it for facial asymmetry from a nerve injury. I will do it for that.

If someone just comes in, and says 'Hey, I don't like the way I look, and I want to reduce wrinkles,' I don't really believe it's indicated for that. And I don't really do it as a preventive measure. In Danielle's case, we did a little Restylane in the lips because she had a gummy smile. She was very knowledgable of the product; she knows about it. In certain cases I will do it [Botox] if I feel it's indicated, but I don't really think it's a common practice. I'm not going to start injecting all 20-year-old people just for wrinkles when they don't have them.

There's no study that shows it's preventive. If you start at a younger age it will weaken the muscle, and it may prevent some wrinkles as you age. But I haven't seen anything in writing, like a study, that shows that. It's not something that I'm going to advertise, or start telling people to get done and that you won't ever get wrinkles. I think in the right situation, if someone wants to try it and they have severe wrinkles, and it works for them, in certain spots, I may do it. But I'm not out there injecting a ton of people and advertising it as preventive, because there are no studies for that.

It's the most common procedure done in the country. It is definitely entry-level, so yes, patients might get something else done. It's well-tolerated, it's safe, but definitely the trend is getting younger. Girls in their twenties getting their lips enhanced. Breast reduction. Breast Augmentation. Chin implants. Guys are doing their noses. I won't see anyone under 18, obviously, but I turn down a lot of people. I had someone the other day in high school who wanted liposuction. I thought she should just exercise and eat right. It has to be the right indication.

There are certain procedures that lend to more self-confidence. But a lot of the times you have to really screen these people out. If you're a busy plastic surgeon, you are turning down a lot of cases, as well. People come in because of these TV shows, they think you have a magic wand. They think, 'Oh I did this, I look great, I want to get this this this and this done.' You know, it's like the Heidi Montag syndrome. Overall, younger people are coming in, but I think a lot of them don't really understand. They just think, 'Oh I'm a little chubby, I want to get liposuction.' They don't understand what it is. So I think that as long as you are within your limits and everyone understands the risks and benefits, I think it's great."

To find out what Gwyneth Paltrow thinks about Botox, click here.

More:
Stylerestylanebotox
Newsletter Sign Up
An essential daily guide to achieving the good life
Subscribe to our lifestyle email.
Successfully Subscribed!
Realness delivered to your inbox