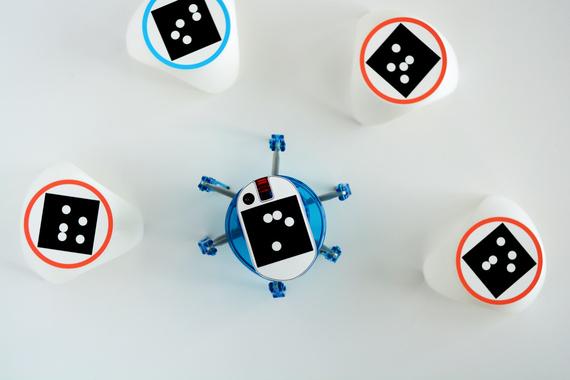 The Robot uprising has started! Bots_Alive is bringing Hexbug Spiders to life. Resistance is futile.

Okay, for now "coming to life" is making Hexbug Spiders autonomously move and avoid red blocks while searching for the beloved blue blocks...but the uprising has to start somewhere.

Bots_Alive, now live on Kickstarter, is a kit that turns mindless remote-controlled Hexbug® Spiders into smart and autonomous creatures.

With Bots_Alive, It Is All About the Movement

As the video shows, the thing that makes bots_alive truly interesting is the organic movement of the robotic spider. The Hexbug Spider makes mistakes, bumps into things, takes indirect routes...all things that a living creature would do.

Building on their knowledge of robots and human interactions, they knew the bots_alive had to move organically to draw in the attention of their intended audience (6-11 year olds). They actually worked with a puppeteer to move the Hexbug in a life like manner. The next step was to convert all these movements into an algorithm that would determine how the bots_alive move.

Disappearing Technology Is Our Favorite Technology

Artificial Intelligence, algorithms, robotic-interaction - there is a lot of sophisticated technology going on with bots_alive, but the good news is you don't need to know anything about it.

Attach a decal to a Hexbug Spider. Place red and blue blocks on the ground. Plug an IR blaster into the headphone jack of your phone and run the bots_alive app. Watch and enjoy!

In order for the bots_alive to, well, come alive - they need to be within view of the camera on your phone or tablet. In the kit you get some foam wedges, to sort of prop your phone up on a table, but it is a less than ideal solution.

As this is intended for 6-11 year old kids, the idea of your expensive smartphone or tablet being propped over the edge of a table, could be a recipe for disaster. On the other hand, it forces you to use your mind, get creative and find ways to mount your phone/tablet over your play area. Maybe this is all part of the STEM aspect of the toy :)

Overall, we were impressed with the bots_alive kit. For a relatively low price you get to watch your Hexbug Spider come to life in a very organic manner and then try to work its way out of the various mazes and obstacles you created.

Up Until Feb. 16, 2017, You Can Pledge Bots_Alive on KickStarter (about $35 to get a Bots_Alive Kit) Visit the Bots_Alive site to Learn More Watch Our Full Video Review of Bots_Alive