Bottled water is a joke, one of the biggest consumer and taxpayer ripoffs ever. I applaud California's Attorney General Jerry Brown who said recently that he will sue to block a proposed water-bottling operation in Northern California by Nestle.

Next, Attorneys General everywhere should require recycling of all plastic bottles and containers by requiring deposits to be paid to encourage returns, as is the case with aluminum cans. Not only do society and the environment pay an unfair price for this consumer hoax, but consumers are being hoodwinked. They are paying from 300 to 3,000 times more than the cost of tap water without any benefit.
Here's an estimate by a University of Toronto geology professor Andrew Miall who took a picture of a grocery store skid of bottled water and calculated the extent of the ripoff. 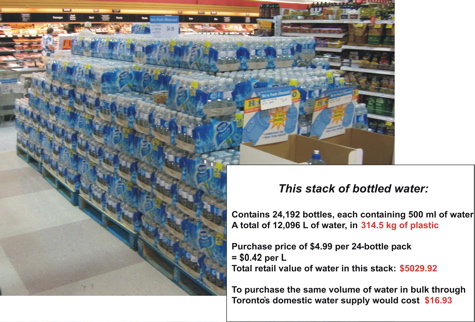 The scam
The water is usually not superior to "city" water or tap water, and is merely a big branding hoax by soda makers. In some cases, this "designer" water is drawn from tap water and labeled for suckers to buy as though it is a superior product.

Dasani in Britain was caught doing this. There are not regulations or proper labeling requirements governing bottled water as there is involving tap water. Some water may be contaminated.

Bottles of water are not fluoridated which has been created tooth decay problems among youngsters and adults who avoid tap water.

There are indications that the plastic may contain harmful carcinogens.

Bottles of water are mini gas guzzlers
One expert estimated that the amount of petroleum -- used to make the bottles, transport, refrigerate, collect and bury them -- would fill one-third of each bottle.

These plastic bottles are creating landfill problems worldwide, and are washing up on beautiful beaches around the planet.

What's wrong with using filters, if people are concerned about local water supplies, and refillable bottles?

Another stupidity
A real estate developer explained the idiocy of ordering bottled water in restaurants. He said bylaws require special water filtration systems be installed so that their "tap water" is safer than any.

Of course, there's always those who want fancy sparkling or soda water, but that's another issue.
About the only justification for bottled water is in developing countries where water supplies are decidedly unsafe or untrustworthy.