"We are allowing them (BP) to play with our livelihood here!"

Billy Nungesser, president of Plaquemines Parish, was almost stuttering to Anderson Cooper an hour after President Obama's address to the nation from the Oval Office. 58 days after the catastrophic explosion aboard the Transocean/Deepwater Horizon, and the subsequent release of millions of gallons of oil into the Gulf of Mexico, there is still no coherent plan to shut down the leak, contain the oil, or respond to the damage done to the environment. There is a new estimate of up to 60,000 barrels a day flow rate. No one believes the numbers BP is providing anymore, and it is stunning that the President is willing to do so.

There is a deep distrust of anything British Petroleum has to say here in south Louisiana, and the President's claim that 90 percent of the flow will be stopped by the middle of July is being roundly criticized. If the number came from BP, there is good reason to be incredulous. In fact, BP has managed this catastrophe as a public relations and shareholder problem. Robert Reich makes a good case for this and questions the president's continuing reference to BP as an entity that will make any decisions based on the welfare of American citizens as opposed to its shareholders.

As citizens, we want the hole in the Gulf plugged up as fast as possible, we want the spill contained, and we want everything cleaned up and damages paid -- no matter how much it costs BP's shareholders. But if we're BP shareholders, we want to minimize all such expenditures -- including our long-term liabilities.

Get it? There's no conflict between Britain and the United States. The conflict is between two kinds of interests -- shareholder interests and citizen interests.

"There is no organization and no sense of urgency," Nungesser told CNN.

One way Nungesser was very wrong. BP does have an organized public relations campaign, and it is mentioned in the "Recovered Oil Waste Management Plan" prepared by BP for the Houma Incident Command.

On the surface, main purpose of the plan is the management of hazardous waste materials collected from clean-up activities -- clean up activities that have yet to materialize in any organized fashion down here. The contractor mentioned is Heritage Environmental.

Written by the Houston office of British Petroleum, the document clearly states that the plan was developed at the request of the Incident Commander, and the US Coast Guard Federal On-Scene Coordinator (FOSC). The FOSC is responsible for coordinating federal efforts with the local community's response. Coast Guard Rear Adm. James Watson is now the federal on scene coordinator for the BP Deepwater Horizon oil spill response. He replaced Rear Adm. Mary Landry and is responsible to the president, as is incident commander, Thad Allen.

The report specifically outlines the management of hazardous waste, but we have some evidence that "Recovered Oil Waste Management Plan" has not been followed in the case of dead wildlife recovery on Grand Isle.

This plan is to cover oil spill clean up activities associated with the Deepwater Horizon rig incident where the source point originated in Mississippi Canyon Block 252 of the Gulf of Mexico. Waste Identification/Characterization. Dead or Injured Wildlife. (United States Wildlife and Fisheries/and Louisiana Department of Wildlife and Fisheries to coordinate) Deceased wildlife recovered from the oil impacted areas will be managed by the department of wildlife and fisheries and will only be managed as waste if and when directed by that agency.

New Orleans photographer Jerry Moran and I visited a section of beach on Grand Isle on Friday, June 11. Moran wanted to show me the location where he photographed the head of a dead bottlenose dolphin on May 25. The dolphin was partially buried in a mound on the back beach, far from the tide line. When he returned on May 28, there were bones, but the dolphin was gone. Moran documented his visit. 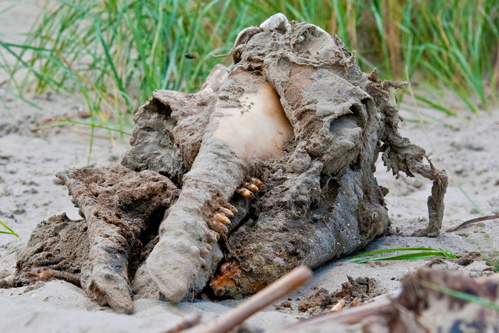 The decaying head was protruding from new excavation in the beach grasses. Moran said that the stench was so bad that he could not dig into the mound to see if anything else was buried there. After reading the report about mandated toxic waste disposal, it seemed important to document the burial mound.

Moran took us to a secluded area of back beach. The jetty had been partially bulldozed and jagged, freshly broken pieces of rock were scattered everywhere. Sand had been moved and the beach was freshly graded. It did not look like a natural beach and heavy equipment tracks were clearly visible.

Moran was certain that he found the location where he photographed the dolphin, but the mound was different and the head was missing. A decaying pile of redfish was nearby, confirming it was the same location. 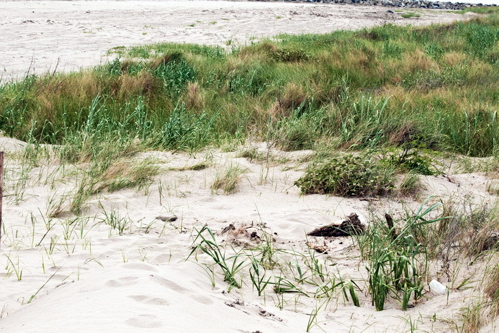 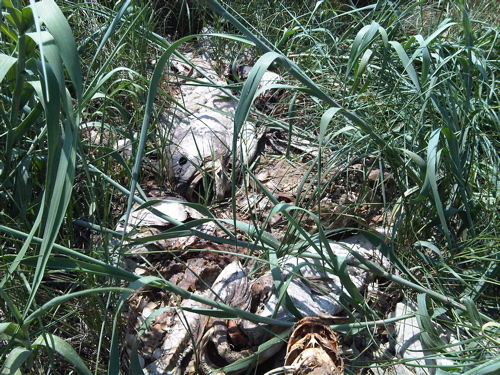 Wishing we had a shovel, we used sticks to dig into the mound. 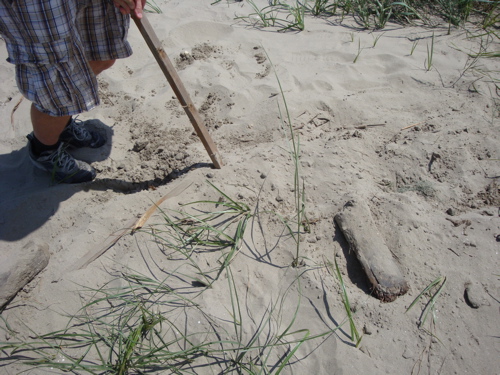 Moran uncovered some unidentifiable bone fragments, before we found what we were looking for.

Dolphin teeth were scattered in the grasses. 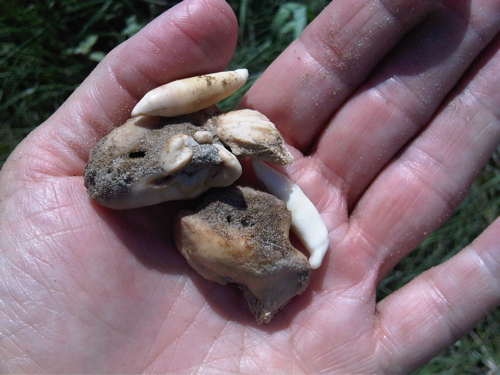 A reasonable question to ask is whether the oil company is malevolent or simply a foreign corporate entity totally under siege and trying everything at its disposal to limit fiscal damage to themselves and their stockholders. BP security is patrolling the Grand Isle beach and in control of access. We discussed possibilities as we quietly walked back to the main road. There was no way to know who moved the dolphin, but it was gone. The question was why would someone move it after burying it? What we did know was that incident command had relegated responsibility for wildlife disposal to United States Wildlife and Fisheries and the Louisiana Department of Wildlife and Fisheries.

Besides outlining the protocol for toxic waste management, and this includes dead animals, the document also calls for an organized approach to "community outreach."

Community relations are vital to the handling of this unfortunate situation. With this in mind a community outreach plan has been developed and is being used throughout this operation including at the staging areas that address community relations. This plan was also used in the planning and securing of these locations.

Unfortunate situation? This is worse than referring to the river of oil spewing from the broken, twisted riser pipe as a "spill."

There were no answers on the beach, but Incident Command had forwarded a press release on June 9 that announced a "Terrebone (wrong spelling) Parish Community Open House" in Houma the same night that we were returning from Grand Isle. You would think they would know the correct spelling.

Representatives from BP, the U.S. Coast Guard, U.S. Wildlife and Fisheries, the Environmental Protection Agency and other state and partner agencies responding to the Deepwater Horizon incident, will host an open house Friday, June 11, 2010 in Terrebone (sic) Parish at the Houma Civic Center, 346 Civic Center Blvd. in Houma starting at 6 pm. The open house will offer Terrebone (sic) residents the opportunity to engage one-on-one with experts about the techniques, strategies and materials being used in the spill response.

"We want to keep the local communities informed with the most accurate and timely information we have," Coast Guard Capt. Roger Leferriere, Coast Guard unified commander at the Incident Command Post in Houma said. "We want to communicate with the public and provide them with first-hand information on the topics that concern them most."

This important meeting was not heavily advertised in the community, was scheduled on a Friday night during the dinner hour, and it was no wonder that attendance was light. State aid organization representatives told us they were mandated to attend by Governor Jindal's office, but only had two days advance warning, and had to scramble to manufacture handouts.

We had a few questions of our own, but there was no point in trying to get candid answers.

The BP representative, Hugh Depland, was not in the mood to speak to someone with a camera. A pleasant young woman named "Janella," with a badge that read "BP-RP" and had a bar code at the bottom was a news liaison. She sensed our frustration, asked who we were, wrote it down, and wondered if our questions were answered. This interaction was staged, managed, and if you had been around the block once or twice you knew immediately her job was not to get questions answered but to soothe expectations.

She asked us to stay put while she sent another BP rep to find out what happened with Depland while we cooled our heels. She said he would talk to us now, but when we tried to find him, he had vanished.

What we found especially chilling was the PR campaign waged on Terrebonne residents. Giant photos, propped on easels, lined the perimeter of the room. The picture BP painted of the "clean-up" effort did not resemble what Moran and I had witnessed in days on the water and prowling the Delta beaches and roads

Photos and video tell the story. 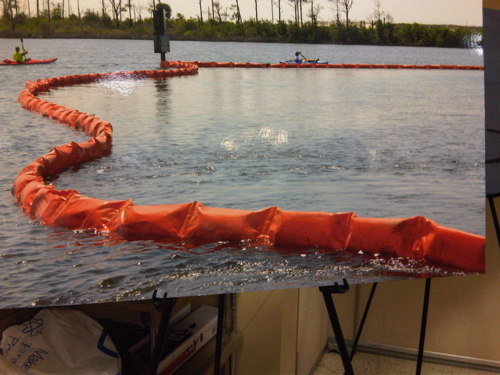 The reality in Barataria Bay near pelican rookery 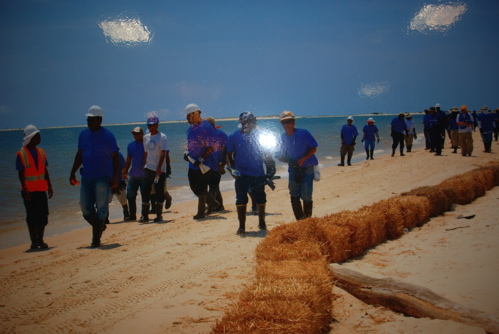 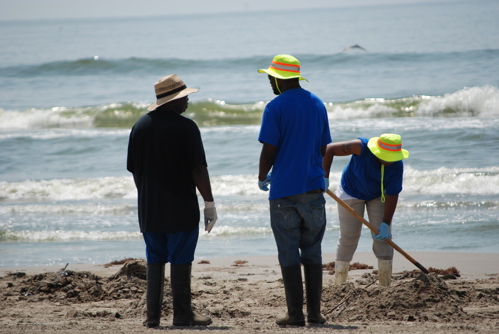 The reality regarding "work" on the beach at Grand Isle

Yes, it was a cheap shot for me to have the video running. I had not intended to publish it, but his discussion of a "hot zone" is worth offering here. On an earlier visit, Talon Security forbade me to take photos of workers.

Local cable station LCN-TV wanted us to go on the air and talk about our experiences. LCN provides cultural snapshot of Louisiana culture, and is not a political entity. The station wanted our perspective on the sights and sounds we witnessed in Barataria Bay and Grand Bayou. Rather than go on the air for an interview, we gave them a stack of images and editor Debbie Stein put this short video together.

In any case, this is reality for the people, the environment and the animals of the Gulf of Mexico and her shores. A secondary reality is that the petroleum industry is vital to the economic health of Louisiana, and no one here doubts that reality.