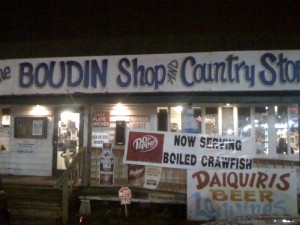 In small towns across South Louisiana, one of life's challenges is catching a whiff of a fresh fried batch of pork fat and skin and trying not to stop. Cooked fresh every morning in corner stores, bags of crunchy, golden, greasy nuggets tempt the senses. Once inside, the battle is only half over. There's no denying yourself a link or two of fresh ground pork meat mixed with rice and seasoning and stuffed into a casing, better known as boudin. These two items make up a true Cajun breakfast. The back roads and highways of the Acadiana region of Louisiana are spotted with signs that read "hot boudin and fresh cracklins." With names like Babineaux's, T-Jim's or Hebert's, these small-town grocers provide two staples of South Louisiana cuisine while keeping alive long-running Cajun traditions.

These small, usually family-owned, businesses survive during a time where food is mass-produced and super stores occupy every corner, but true Cajuns only serve the best when it comes to cracklins and boudin. It probably comes as no surprise that these two treats are a result of one of the Cajuns' most long-lived traditions. Boucheries, which are cookouts where a whole hog is killed and cooked over a fire for an entire day, began as a way to cook meat before it spoiled. It's an all-day event that usually involves more food than necessary, plenty of drinking and good company. While boucheries are no longer a necessity due to modern refrigeration, the tradition still lives on. The most important part of a boucherie was to put every part of the pig to use, and so boudin and cracklins were born.

In Louisiana, they've found a way to provide a yearlong serving of fats and oils in one bite, and it comes in the form of a cracklin. Unfortunately, they're served by the pound. For those with high cholesterol, this is probably a good stopping point. The process of making cracklins, also called
Advertisement
gratons
, involves two stages of frying. Because frying pork fat in hog lard once wasn't sufficient, Cajuns decided do it twice. The cracklins are first fried at a lower temperature for about an hour or so and then taken out to cool. Once they are cool they are dumped back into a hot black iron pot until they give a popping noise, hence the name "cracklin."

The makeup of a perfect cracklin is a topic that has long been debated by both Cajun natives and visitors of Cajun country. Typically it contains a layer of meat, fat, and skin. What kind of cracklin you get usually depends on how the meat is cut. Some butchers cut thicker cracklins that contain all three layers, while some use only the first layer of skin. There's no mistake to be made when eating a cracklin because they're all good, whether the preference is crumbly and crunchy or a little bit chewy. There is only one cracklin faux pas, and that is to call them pork rinds. 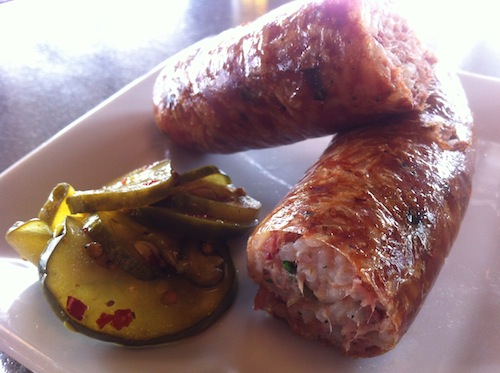 Next to the cracklins, usually under a hot lamp, is fresh boudin. Served in a piece of white paper taped on the sides, boudin is a snack made for the Cajun on the go. Boiled, fried, grilled, or smoked, boudin is something that everyone should enjoy. The name boudin comes from the French word for sausage. It was natural for the French-speaking Cajuns to call their version of sausage what they always knew it to be. While many of these grocery stores also make their own sausages, boudin contains the unique ingredient of rice and is usually served on its own.

Boudin is traditionally made with the leftover pieces of the pig from a boucherie, such as the head (modern day boudins typically use pig shoulders). Similar to rice dressing or "dirty rice," the pork meat is mixed with various seasonings and rice. In the times of true boucheries, when every piece of a pig was used, the mixture was then stuffed into the pig's intestines. While the description may not ignite a craving for a hot, fresh link, boudin has stood the test of time and remains an iconic and favorite Cajun creation.

One question that most people have when eating boudin is whether or not to eat the casing. If it's boiled, the casing has a chewy texture that can be hard to swallow. If grilled or smoked, however, it adds a nice crunch to the gooey consistency of the rice and pork stuffing. The boudin that is most common and can be found in most grocery stores is called white boudin, with the other kind called red boudin. As mentioned earlier, every part of a pig was used during a boucherie, so it shouldn't take much time to determine what differentiates between red and white. Red boudin contains the special ingredient of hog blood. Due to health codes, red boudin can only be sold in slaughterhouses that are inspected on a regular basis. As a result, it's somewhat difficult to find red boudin, even in South Louisiana and it's not very high in demand. 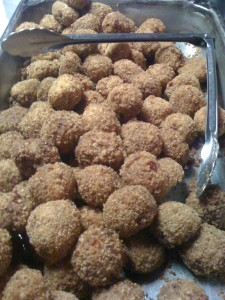 South Louisiana is famous for its boudin and cracklins. Parts of Acadiana have designated boudin and cracklin trails to help people navigate the back roads to the corner stores with the most delicacies around. The same people who grew up eating homemade boudin and cracklins have put their traditions and experiences into practice in order to serve up some of the most sought-after Cajun foods. Louisiana doesn't always have the best food for your heart health, but if you every have a chance to try a true Cajun breakfast, you'll probably never forget it.

Related Links from the Menuism BBQ Blog:
• Kentucky BBQ Mutton
• Cajun vs. Creole - What's the Difference?
• An Introduction to Barbecue Styles Across the United States

Boudin and Cracklins in Cajun Country originally published on the Menuism BBQ Blog.

More:
FoodLouisiana
Newsletter Sign Up
An essential daily guide to achieving the good life
Subscribe to our lifestyle email.
Successfully Subscribed!
Realness delivered to your inbox