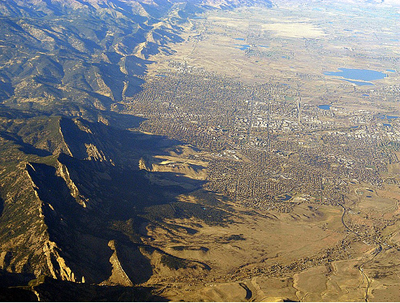 By now we all know that Boulder's been dubbed "happiest and healthiest" city in America by the Gallup-Healthways Well-Being Index. Funnily enough, this news didn't make many local waves. Most people I know either smugly smiled or rolled their eyes. Yes, we know we live in paradise. And sometimes that's half the problem.

Let me explain. Returning to Boulder after a recent two-month trip home to the East Coast, I was struck by how easy everything is here. Our small, centralized downtown means that I'll never have to sit on the subway or bus for 45 minutes to meet a friend for coffee. Work isn't hard to find and rents are higher than Denver but way below what I'd find in any coastal metropolis. There's hardly any traffic, or serious crime, or even bad attitudes. Instead we have bike lanes and a farmers' market and huge slabs of sandstone called "the flatirons" that surge up from the foothills against a perpetually blue and cloudless sky.

But. As a young resident who moved here for college and stayed beyond graduation, first for a job and then for a relationship and now because I just can't seem to tear myself away--I can't ignore the restlessness that pervades this city. The simultaneous pull to stay and desire to go that no one under thirty seems immune to. We even have a term for it: Chief Niwot's Curse.

According to urban legend, Chief Niwot, leader of the Inuna-Ina or Southern Arapahoe, upon being forced from the land that had been his people's home, made a prediction. (Most people call it a curse, but I think it's more likely that the Chief was simply a wise and astute judge of human nature.) According to Wikipedia he took a last look over the landscape and proclaimed,

People, seeing the beauty of this valley will want to stay, and their staying will be the undoing of the beauty.

This can obviously be interpreted from an environmental standpoint: the coal-fired power plant that provides most of us with electricity or the homogeneous suburbs sprouting on once-deserted hills. But I'd like to offer another possibility. Boulder is special because it is such a community-oriented place. The size and scale of it, the bike paths and parks, the meditation centers, rock climbing gyms and plethora of cafes make it almost impossible to feel isolated. It's comfortable, and so we stay. But from our staying comes a claustrophobia that threatens to ruin it all.

My friends and I love to make fun of ourselves, to ruefully grimace when we return, yet again, to the place we swore we'd leave behind (I've done so twice already in the last year). On one hand, we come back because it's so easy to pick up where we left off. This town is forever unchanging. You leave for two or three months, even years I'm told, and return to the same table of old men arguing about politics by the front window of The Trident each weekday morning, the standby egg and avocado sandwich at Dot's Diner, even the reliability of sunshine day after day after day.

On the other hand, places like New York and Los Angeles offer opportunities and stimulate us in a way that Boulder does not. Cities like Detroit and Oakland, even Denver, raise a diversity of social questions and issues that are far too easy to ignore in our self-satisfied little paradise. For better or for worse, we've discovered that people are perhaps more productive, more creative, more challenged when they are not the healthiest and happiest that they've ever been.

But still...can you blame us for wanting to be happy?

And so the Chief's curse becomes a koan of sorts--a question to be lived. Do we really have to choose between feeling at home and being pushed to our potential? The paradox of paradise, and the particular challenge of Boulder, is the necessity of finding dynamism amid our everyday bliss. A city like New York may slap it in our faces each day, but in Boulder we must seek out new relationships, new experiences, new perspectives and opportunities to shake our normal routines.

Perhaps I'm just spoiled. But I'm also genuinely confused, finding myself torn between the lure of challenge and growth and the comfort of close community and a killer quality of life. So I turn this question to you, dear Boulderites (and residents of all other utopian towns): Do you live in paradise? Do you feel challenged? How will you continue to grow despite the comforts of our supremely healthy, happy little town?

Merete Mueller has lived in Boulder for almost seven years. You can find her at meretemueller.com. With thanks to flickr user cameron23 for the arial image.