This time of year in Boulder the black bears get so hungry they drop their shyness and make an appearance where ever they can find a good meal. They are preparing for a long winter of temporary hibernation known as torpor by chomping down about 20,000 calories per day. Our open space trails provide lots of fruit and berries, so off I went into the woods to capture some photos of these amazing creatures. It's pretty easy knowing when you are getting close to a bear from the trail scat. After several days tracking bear poop for my readers, my wife called with the news that three bears were hanging out in the locust tree in my front yard! While our trails can be a good source of calories, our local neighborhoods can be a virtual bear buffet with fruit, berries and some very nice garbage and compost for desert. Here is the story of the three bears that came for an unexpected visit to the Wolf home ...

At about 2 pm mom and her two cubs were spotted in our tree: 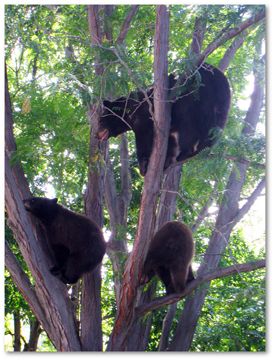 After about an hour of aerial gymnastics the folks from Boulder Open Space and Mountain Parks and the Colorado Division of Wildlife decided to tranquilize the sow to get her out of harm's way.

They missed and mom took off leaving the cubs to fend for themselves at our house. 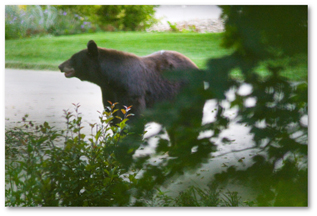 After a few minutes of heart wrenching crying, the cubs settle down to chew on tree bark and enjoy watching the entertaining humans who have begun to assemble. They are just waiting for Mom to return. 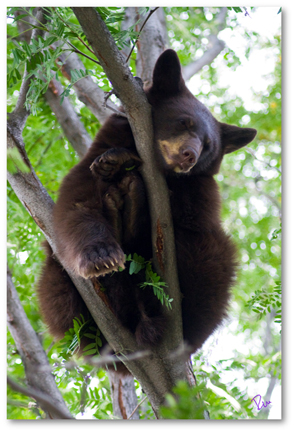 Having parked the kids in our tree, mom proceeds to loot the neighborhood for calories. 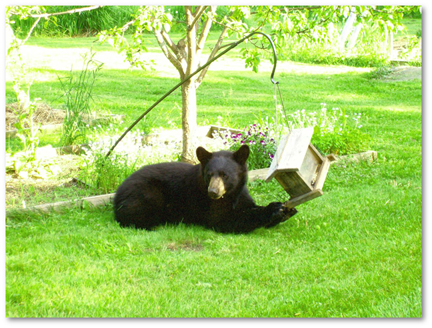 She tries to come back to pick up the kids but decides it is too risky.

Maybe She'll Pick Them Up Later

At about 5:30pm the cubs scooted down the tree and set out to find mom. I spoke with Larry Rogstad of the Colorado Division of Wildlife to get the conclusion of this family drama. He told me that after they left my house he followed the cubs back to the tree where they had been earlier that day with mom. They stayed there until dusk entertaining the humans by playing with branches. They eventually sauntered off in the direction of where mom was thought to have bedded down for the night. Nothing was heard of them today and this is good news. If they were not spotted in town that means they found their way back to the foothills to live happily ever after ... or at least until tomorrow. 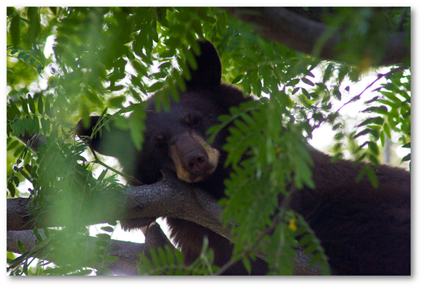 Ok Folks, The Show Is Over