Sometimes the forest harbors interesting and important tales which can be revealed by asking a simple question.

I was out hiking on Boulder's Ranger Trail near the Green Mountain Lodge today and I noticed some fine black "soot" on the sunny trailside snow banks. 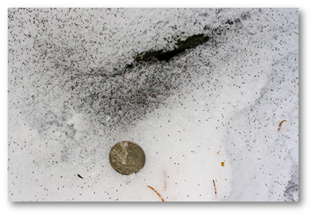 Trailside Soot? (with US Quarter Dollar)

I picked up a handful of this soot covered snow, and the little specks hopped away like scared bunnies! On closer inspection, and after some research, I discovered the tale of an amazing little critter that I learned is called a Snow Flea (Hypogastrura nivicola). The simple question in this case was: why is the snow flea the only insect I have seen in winter? This lowly 1/16th inch (1-2mm) animal had an interesting tale to tell...

-Snow fleas are not really fleas, but belong to a group of primitive organisms called springtails (Collembola). They date back well before dinosaurs, to the middle Paleozoic era, about 400 million years ago. They are also known as scorpion-flys though they are harmless and lack wings. Not only is the snow flea not a flea, but it may not even be an insect. After studying the springtail's primitive anatomy in detail, many scientists now consider the creatures to be a special kind of hexapod. Hexapods are the predecessors from which insects are believed to have evolved. 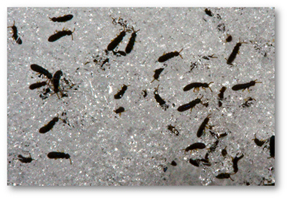 -Snow fleas, like all springtails, have an unusual appendage (a furcula) that folds under the abdomen and can be used to suddenly propel the insects several inches. This means a snow flea can jump about one hundred times its own length. That is a feat equivalent to a grown person jumping the length of two football fields! It can't steer however so it often lands pretty much where it started.

-They are found on every continent, and are the only insect that can be found near either pole. They look like black, oval-shaped specks to the unaided eye. They are most easily noticed when they gather by the thousands in a small area to feed on pollen, spores, algae, or bacteria on the surface of the snow. Despite their name, they cannot harm people or pets, and actually play a crucial role in building soil. 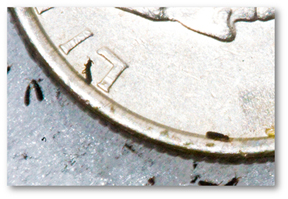 -Here's the heart warming part of the story (literally). When the cold has removed other insects from the scene these little prehistoric bugs enjoy hanging out on the snow's surface during winter's coldest predator-free months. Like other forest inhabitants they use the subnivean and the warmth of trees (a winter tale for another day) to stay warm. Unlike the others however, they are able to avoid freezing in temperatures that would spell the demise of a normal bug. Researchers at Queen's University examined how this little guy can withstand the cold and they discovered a new antifreeze protein that may lengthen the shelf life of human organs for transplantation. The potent, non-toxic protein produced during the fleas evolution to protect them from freezing is capable of inhibiting ice growth by about six Celsius degrees. This would allow organs to be stored at lower temperatures, expanding the time allowed between removal and transplant. Who knows, maybe some day, thanks to a dose of "snow flea antifreeze protein (sfAFP)", we might all enjoy a vacation in the Arctic.

Sometimes you can't tell a bug by its cover!