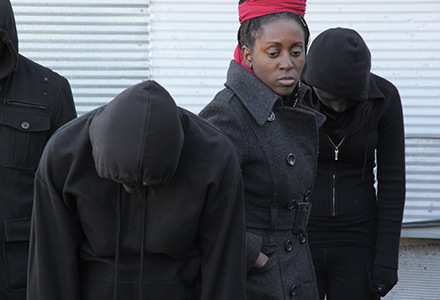 "I believe that when you wrestle with your demons in public, they cease to haunt you in private," says writer, producer and director Peres Owino.

With her upcoming critically acclaimed debut, Bound: Africans vs. African Americans, Kenyan-born Owino attempts to do that. The first step towards bridging a gap between Africans and African Americans was in her own life. "This film was the African woman's way of starting a long, overdue conversation on the enslavement of African people, and the colonization of Africa," she reflects. "Looking at what happened to us, and how that continues to affect us, in the hopes of inspiring our own healing."

Sharing their historical narrative was crucial to the film's process. Producer of the film and famed actor, Isaiah Washington says, "DNA has memory." Washington, who has already been building these bridges to connect his roots, previously explored the subject matter in his remarkable 2011 memoir , A Man From Another Land: How Finding My Roots Changed My Life.

In this documentary, Owino and Washington had 14 people brave enough to sit in the room with each other and talk candidly about their cultural and internal racial differences. "That is a great start... but we need more," Owino admits. "In fact, all of humanity has to have this conversation, individually and collectively."

Historically, we do not read enough about how Africans, Europeans and Asians were victims and perpetrators on all sides. Every person and every group is going to have to join the conversation about the enslavement of African people because that legacy is still alive today. It is not too hard to look closely at the current racial climate in America -- the fear, mistrust, hurt and anger.

However, this groundbreaking film helps play a role in overcoming this dichotomy by showing individuals sitting down together and having an honest (and shockingly civil) conversation. And not that all of the topics featured were politically correct -- that genuinely gave the film an honest dialogue about what black people across the Diaspora think, and how we got there. However, the film gets to the core of suggesting what is perhaps the only way we will get to understanding ourselves and each other.

And, yes, there is still taboo with having frank discussions about racism or any form of discrimination, but look at the alternatives when not attempting to have such dialogue. Discomfort in dialogue is temporary, but the death of our humanity is permanent. This film seems to convey that message more seamlessly than anything I have seen on the topic in recent years.

Bound hopes to inspire more than just Africans and African Americans to engage in dialogue, but all groups of people who find themselves in opposing sides of history. The theme of the film is very universal to the point that if you removed the two sides debating in this film and replaced it with blacks vs. whites, women vs. men, Muslims vs. Christians, gay people vs. straights people -- you would find similar parallels in the need for a straightforward dialogue. The film teaches the message that we are culturally bound to each other, and that everyone's historical narrative is worth listening to because it shapes them.

Renowned scholar Dr. Joy Degruy, who is featured in the film discussing her enlightened theory on Post Traumatic Slave Syndrome (PTSS), once said "Humanity is like an orchestra, and sometimes the different sections have to cluster to make sure their instruments are in tune." For Owino, this message struck a chord to her when directing.

"Bound, to me, is a call to the percussion section, if you will, African people saying, 'hold on, our instruments are not in tune. Let's cluster and figure out why the wrong note," she says.

My hope is that we, humanity, will learn not to just play the notes of our own instruments and our own section but the notes of every instrument, the entire symphony...really, we should all endeavor to be the conductor.

If there was ever a film this year to fully explore your roots unapologetically, this would be it.