"So, wanna curate a booth with me at Photo Independent?" Of course I said yes. I love curating. And saying yes comes easily to me when it involves art. Then came the kicker: My friend asking, noted SoCal art world photographer, fellow HuffPost contributor and man-about-town Eric Minh Swenson, dropped this on me: "It's gonna be all fetish photographers and the title of the show is EMSex." EMSex, Eric Minh Swenson + sex. None of his work, only erotic/fetish photographers he respects and admires.

Most people who know me know I'm not squeamish about sex. And those who are lucky enough to be intimate with me know that I'm certainly no prude. Vanilla, sure, but not a prude. Still for me, BDSM and fetish photography with women as the submissive raise questions about power, dominance, women's work, men's work, pain for pay, and the most recent Senate vote which blocked equal pay for women. Granted, there's more to fetish/erotic photography than ropes and rubber cat suits. For me the challenge would be to create a cohesive, compelling exhibition that would showcase the artists while revealing aspects of Eric Minh Swenson.

EMS is a driven dude -- he's shot 400 artist mini-documentaries and thousands of stills of artists, gallerists and collectors, as well as four feature films and a full-length art documentary, Mana, that's in post-production -- He's also getting over a major heartbreak by throwing himself even more into work. And he's a good friend who trusts me, and pretty much said, "Go for it. Here's who's in the show."

Photo Independent focuses on individual artists, with over 70 photographers from around the world. It's the first photographer-only art fair showcasing fine art photographers, and provides a unique forum of exchange between photographers and art professionals. EMSex is one of several special exhibitions at Photo Independent that include the American Aperture Awards (AX3) Photography Competition, and Robert Heinecken's 1968 "Venus Mirrored," presented by Medicines Global. Off The Wall magazine, Treats! magazine and Curatorial Assistance, Art & Exhibition Services are also presenting special exhibitions, as is the Los Angeles Art Association which is the beneficiary of the Friday gala opening party honoring Andy Summers. Summers, while best known as the guitarist for the Police, is also a fine art photographer, and his series, "Mysterious Barricades" will be on exhibit.

The first step in any curation is to look at the art (duh), and see how it flows into the conscious and unconscious concept. It was natural to use Robert Adler's 1970s burlesque shots because they were the photos that launched his career and thus a nod to how Eric's photos of the art world have propelled his career. Adler's images of women gazing in mirrors or boldly confronting a camera brought to my mind how Eric reflects upon himself and then boldly goes forth. From Steve Diet Goedde I chose early pieces from his time in Chicago, a piece he shot after moving to LA and playful, iconic works, all commentaries on Eric's journey as a photographer of iconic artists in Los Angeles. Ed Fox's work in EMSex merges his glamour and candid shots, and is lush and honest -- qualities that Eric brings to his portraits. Victor Lightworship's black-and-white images create a dialogue between the subject and the viewer, as well as subtly addressing philosophical issues, all concepts found in EMS' work. Dave Naz is a close friend of Eric's and Eric documents Naz's shoots in ongoing collaborative films and stills complied as "3way Series." With each of these photographers I tried to choose at least one work that had an element of the candid or the unexpected. The wild card was Eric Kroll, the grandfather of new erotic photography who is sending me framed images, sight unseen. And in a way that's perfect since part of curating, like shooting is trust. And surprise.

I think Eric Minh Swenson will be surprised by the works I've chosen out the photographers he selected, and by how I am planning to hang them -- though really sometimes that plan changes as the art sits together, and one's well conceived wall plotting goes out the door as an epiphany strikes. Or simply because of practicality!

It's been an adventure to look at the work of these photographers (or in the case of Kroll, visualizing them over the phone) and to develop a show and storyline that fits into the idea of EMSex and Eric Minh Swenson, a smart, sensitive guy who is part playboy, part Boy Scout, who gives the impression of being an open book and yet who is one of the most mysterious (and sought after) bachelors in Los Angeles. (Yes, ladies, he's single, so drop by the booth!) And it's been an internal adventure for me to analyze and process a wide range of fetish and erotic photography, to choose works which do not necessarily produce the most immediate visceral (or perhaps genital) reaction, but which have a degree of humor, tenderness, subtlety and seduction, hopefully bringing a feminine touch to revealing what is primarily a male-centric genre. 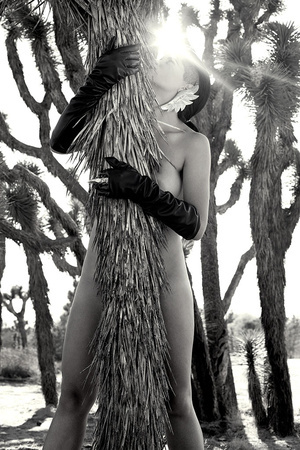