Previously, only Chicago's breweries were getting in on the barrel-aged action.

"Everything is getting a lot more culinary," Diaz explained during an interview with The Huffington Post. "The barrel aging is just a good way to keep this stuff in use."

Diaz said that, like many of the ideas at Dark Matter, the notion of barrel-aged coffee was kicked around "for years" before the plan finally came together at the recent Rodrigo y Gabriela taping for WBEZ's "Sound Opinions." After the show held inside Goose Island's barrelhouse, Diaz mentioned his concept; in no time flat, two bourbon barrels from the brewery were on their way to Dark Matter's Ukrainian Village roasting facility.

The small batch operation is the first coffee roaster in the Windy City to employ the centuries-old practice of barrel aging, though Dark Matter owner Jesse Diaz notes a few other roasters in the U.S. have experimented with the still-new-to-the-industry practice. 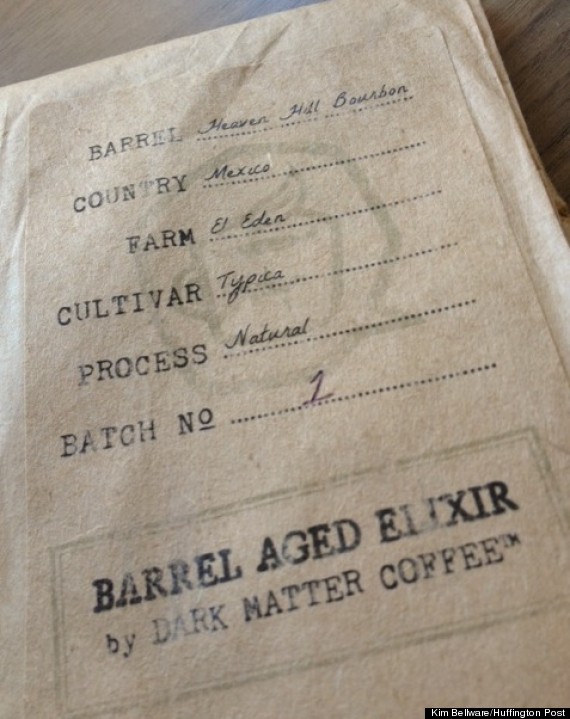 While the barrel-aged coffee has a plenty of kick, there's no actual alcohol content in the final brew. Diaz says the process basically works the same way as an infusion: Green beans are aged for roughly three weeks in the barrels until they absorb the lingering moisture from the wood; once roasted, the beans retain flavor notes from the bourbon, such as vanilla and honey.

Indeed, a bottle of the "Black Splash" gives off a huge, boozy, smell. Taste-wise, the flavor is rich and bold with lingering notes of bourbon and vanilla -- minus the boozy sting.

Last week, Dark Matter put fewer than 50 bags of the coffee up for sale -- 20 online and 25 at their Star Lounge Cafe. Everything sold out in less than a day.

Diaz said the barrel aging experiment will continue with any barrel he can get his hands on -- rum, sherry, absinthe, wine -- and he hopes to partner with some of the city's distilleries to boot (here's looking at you, Koval!).

With such a positive reception to the first batch of barrel-aged goodness, early Tuesday, Dark Matter released 20 12-ounce bags of the second batch of the series.