Television matters. Avner Ronen knew that from the moment he launched Boxee. And not because he want to watch movies and downloaded BitTorrented TV shows.

Television is a language that crosses boundaries, connects people, shares ideas and information. It's a powerful and exploding force for information creation and sharing.

So, when Ronen and his small team launched the first alpha in June of 2008 - five years ago, the idea of cable-cutting had yet to be a consumer trend. Today, it's a raging river - in no small part due to Boxee.

Boxee began as a spin off of XBMC - an open source project to make TV something that developers could build on. And from 2008 until 2012 Boxee was the developer's choice for a free desktop video platform.

In December of 2009, noted venture capitalist and NY Tech leader Fred Wilson blogged: "I encourage all of you who want to see the future of television to get on the L train and head out to Williamsburg," he said in advance of the Boxee Beta launch at the Music Hall of Williamsburg. 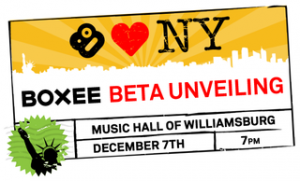 I'd already been a fan, and I'd downloaded the alpha and had it running on a cracked Apple TV - so I was in camp Boxee already. But Fred was right, and the evening was unlike any tech event I'd ever attended. The hall was jammed, like a underground rock show - and the developers were chomping at the bit to get their hands on new Boxee code. Why? Because TV is powerful, important, and the last great bastion of unbroken media. Think about it. The web has revolutionized publishing, photography, commerce, crowdsourced funding, and more. But video had at that point remained a hard thing to democratize. The files were to big.The cabal of cable TV companies and content owners and makers too powerful. Ronen was out to break their grip, and he had an army of motivated hackers to help him get there.

In 2010 things heated up; Ronen debated Mark Cuban on stage at SXSW. Things got testy - with Cuban saying the internet isn't robust enough to distribute video content in HD and that Cable/Satellite are the best distribution channels for it. Ronan responded that the future of the internet is video and he's currently building a service to deliver it. He has seen the future with clarity and drive, saying of web content's role in TV: "It's not a matter of if but when." 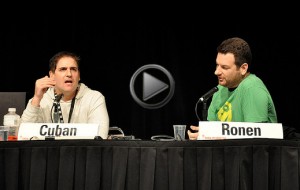 What I admired about Ronen then, as I do today, was his willingness to see the future not as a series of limits and entrenched interest, but rather as something that consumers want and deserve. His vision was about choice and freedom, not about controlling what consumers can see with his software or devices. Compare this to Apple TV, and the distinction is obvious. Apple believes the mass market wants clean, simple choices and top down review of content. No objectionable content on Apple TV. No edgy video blogs. No counter culture voices. No risky content. But Boxee users wanted open access, and with Ronen's software they had unfettered access.

That being said- it wasn't an easy path. One Boxee advisor who I know told me he pled with Ronen not to wear a hoodie to a meeting with network execs. But Ronen wasn't playing by their rules. The hoodie remained, as did the challenges.

"Some of the dynamics in the market are beyond our control. Whether certain content is available over the top is not something we can drive, it's a wider industry dynamic" Ronen told Michael Wolff in Forbes in 2012.

Boxee is, at its heart, a software company. And as they explored hardware, first with the innovative but oddly shaped Boxee Box and then more recently with Boxee TV, the demands of a fast moving market and slow moving hardware/retail environment added unique and complex challenges The company's Venture Capital backing, while certainly a who's who of funders, was thin. With just $26 million in - they had no room to make mistakes or have a product in the market that didn't turn profitable quickly. It's worth pointing out here that other's have tried to build hardware for TV - folks like Google's well funded Google TV box with Logitech has been pretty much a bust despite solid capitalization and national launch.

Boxee TV was, by any measure, something consumers would have wanted. The holy grail of a Tivo-like DVR in the cloud, combined with web discovered content and authenticated apps for services like HBO. In the Boxee TV box, you could see what the future of connected TV might be. Open, powerful, elegant. But the launch was marred by tech glitches, confusing marketing via Walmart, and the underlying sense that there just wasn't enough cash to support a large national launch. No finger pointing here, it's just the fact that the future of TV is hard - and the road perhaps longer than either Ronen or his investors imagined. And, the shift from a developer/hacker darling to a consumer brand is a tricky evolution by any standard.

And that could mean any number of things for Ronen and his vision for TV. He's 37 years old, hardly a kid - but very much a driven visionary. The sale can't be considered a huge win, given the $30 million dollar reported value, and the investor's $26 million in. It's certainly a concern that none of the web video startups were interested in snapping up Boxee at a fire-sale price. Why no AOL, or Yahoo, or Guggenheim Partners? Maybe because they've come to realize, as Ronen learned, that the owners of TV are going to control the next chapter in IPTV - and no technogy is going to change that.

But Samsung is an interesting home for Ronen and the Boxee team. They're a huge, massive, manufacturer of hardware. They're making terrific headway in the cell phone, camera, and flat screen space. And, maybe, just maybe, they see Boxee has the groundbreaking technology it can be.

Will they bake Boxee into flat screens? Sure, some of it.

Will they build and sell a set top box to compete with Apple TV and Roku? Maybe.

Will Avner's dream be built at Samsung, or will he be off to his next startup once the Boxee team is settled in?

That remains to be seen.