The new polls bump Boxer's lead on our overall trend estimate up to nearly four percentage points (47.7% to 43.9). If this statistic were based on just one poll, if would likely fall within the typical poll's margin of error, but given that five polls in the last week show Boxer leading by margins of two to ten percentage points, our model now gives Boxer a 90% probability of winning (which we still consider in the "lean" Democrat range). 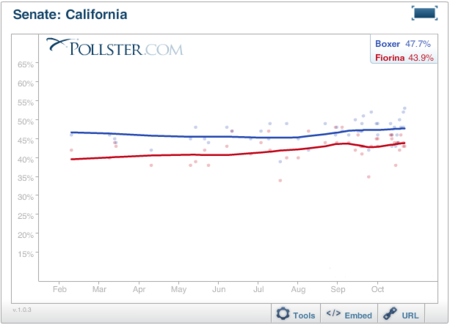 All three new polls also show Democrat Jerry Brown leading Republican Meg Whitman by comfortable margins of between 8 and 11 percentage points. Brown now leads by nearly eight percentage points (49.1% to 41.3%) on our trend estimate, enough for us to rate the Governor's race as "strong" Democrat.

[Update: A fourth new California poll released late last night by SurveyUSA shows results consistent with the other three. They show Boxer leading by five (45% to 40%), Brown leading by 12 (46% to 38%)].

Yesterday also yielded one new survey each in three critical Senate battlegrounds, West Virginia, Illinois and Nevada, each generally consistent with prior results.

In West Virginia, a new Fox News/Pulse survey shows Republican John Raese with a nominal two-point advantage (48% to 46%) over Democrat Joe Manchin. The Fox/Pulse surveys are conducted by a Rasmussen Reports subsidiary and use the same methodology. All of their polls have given Raese a nominal lead, although this latest Fox/Pulse survey yields a slightly closer margin than their surveys last week. The polls by other organizations have typically given Manchin a nominal advantage.

Our trend estimate splits the difference between the two, giving Manchin a 1.3 point advantage (47.3% to 46.0%). Our model reads that as just a 72% win probability for Manchin, which is within our "toss-up" range.

In Illinois, the Democratic Senatorial Campaign Committee (DSCC) released an internal poll showing Democrat Alexi Giannoulias with a 2-point edge (38% to 36%) over Republican Mark Kirk, but also showing nearly one voter in four either undecided (15%) or expressing support for the Green (7%) or Libertarian party (4%) candidates. The result is slightly closer than the last survey from DSCC/Anzallone-Liszt, conducted roughly 10 days earlier, that gave Giannoulias with a five-point lead (41% to 36%).

Finally, in Pennsylvania, we have three new results to consider: The latest Reuters/Ipsos poll shows a tie (46% each) between Republican Pat Toomey and Democrat Joe Sestak. A new survey from Franklin & Marshall College conducted over the last week gives Toomey a seven-point lead (43% to 36%) but yields a much bigger undecided number (19%) than other surveys. And Toomey's lead on the the latest daily tracking poll from Muhlenberg College clicks down to 5 points (46% to 41%).

Our Pennsylvania trend estimate now gives Toomey an advantage of more than two points (46.3% to 43.7%), enough to merit "lean" Republican status for now.