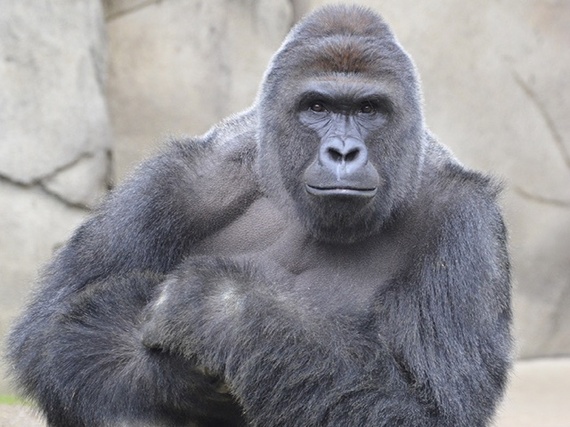 I'm sorry about the gorilla. I really am.

Harambe's death by the rifle of a Cincinnati Zoo sharpshooter is an injustice... no question. The people who breed, raise, love and care for these animals had no choice - they were forced to kill one of their own. It's a tragedy. Harambe deserved better. Period. His death, though an injustice, was justified. It was a necessary injustice given the circumstances. A boy's life was on the line. Shoot first, ask questions later. There was no other justifiable course of action.

Humans are at the top of the food chain. It took us thousands of years and countless advances in science, technology and willpower to get here. A man, woman or child's life is more "valued" than the life of any other creature on earth. At least that's true in many civilized countries. Note: I didn't say more valuable, I said more valued. That fact clearly violates the law of the jungle, but man has rewritten the rules. It's what nature intended as we evolved into this role. If nature itself intended otherwise, it would not have, for example, obliterated the dinosaurs. Velociraptors could have easily inherited the earth. They're gone. We're here. We make the rules now. There are even laws protecting the lives of humans. Some are on the books. Some are unwritten.

When a child's life is in imminent danger at the hands of a gorilla, the jaws of a shark or the fangs of a black mamba, the kid is the one who gets to live if a choice must be made. Even in the "controlled" environment of a zoo. It doesn't matter that this kid deliberately breached the barrier that divided the gorilla's territory from our own. It doesn't matter that the kid's mother may have been monitoring four children at once and didn't see the child climbing over the barrier. It doesn't matter that this kid's father may or may not have once been a drug trafficker or a kidnapper. None of those things justify risking the life of that kid - or any other kid. They just don't. Harambe became the innocent victim of a series of circumstances beyond his comprehension or control. He was a 450-pound goliath. He very well may have been protecting the kid. He very well may have wanted to rip the kid into pieces because another male was violating his territory where other females lived. He very well may have wanted to play paddycake. Who knows? But taking a "watch and wait" approach to this rescue by using a tranquilizer dart, which would take 10 minutes to neutralize the gorilla, was not an option.

While Harambe's death was, in fact, a necessary injustice, it was also an avoidable injustice. A bit of foresight would have prevented the circumstances that led to this tragedy and all the criticism that resulted in hindsight. Was the zoo at fault because the enclosure designed to keep Herambe in was insufficient at keeping humans out? Was the boy's mother at fault for poor supervision? Does the media share any responsibility for wallpapering its newscasts with the viral video deliberately inflaming viewers around the world during the end of its May sweeps rating period? These are questions that deserve answers.

As a veteran TV news producer, I can attest to the fact that reporting on the deaths of hundreds of people in a war or a genocide or an accident barely sparks a single social media mention. But damned if an animal dies - social media is bombarded with anger and outrage and a call for justice. That's because people perceive animals as innocent. Humans are guilty. We are perceived as complicit, somehow getting exactly what we deserve - man, woman or child. Killing each other reveals our nature. Killing an animal reveals our inhumanity.

For every Harambe, there are countless animals around the world being driven to extinction because of our "food chain" status. It's almost too cliche to even go there. Alas, those animals suffer the misfortune of not having a name, of not being in a position to spark a viral video that puts billions of eyes on their plight, and of not living in the "relative" safety of a zoo where humans can put these lower life forms on display. It's not about Harambe. It's just that his fate was caught on camera, his face was splashed on media screens around the world - he got the Helvetica Bold screen banners and sobering theme music and American hero obituary treatment. In our rush to judgement, our hunger for vengeance, our obsessive quest for fairness, we missed the point. We completely missed the point.

I'm sorry about the gorilla. I really am.