With Sister Sledge's "We Are Family" blasting, students, teachers, parents and community members tied thousands of fabric strips to the schoolyard fence. After 15-year-old David Fite tied the last piece into an expert bowline -- arguably the strongest knot with the least stress to the lead line -- the only thing standing between the boy and his lifelong dream of becoming an Eagle Scout was a rainbow.

When he overheard camp counselors discussing the Boy Scouts of America's institutionalized homophobia two years ago, David returned home to Chicago despondent. "I was having a blast," he recalls. "I couldn't understand why any kid, gay or straight, wouldn't want to be a part of it." After a quick Internet search confirmed his worst suspicions, David told his mother that he needed to quit or follow the lead of a handful of Eagle candidates who were earning, then returning, their badges in protest. Since her son loved camping and his troop, and was so close to achieving one of the country's highest honors, she proposed another idea: If he thought the policy was so immoral, why not convince the organization to change it?

After countless letters to national leadership went unanswered, David joined a broad-based grassroots movement of fellow Scouts using social media to encourage people to make their voices heard. After 6 months of aggressive lobbying, lo and behold, David beat Goliath: the 105-year-old institution begrudgingly reversed its national ban prohibiting openly gay youth Scouts. However, the organization stopped short of permitting "open or avowed" gay adult members or leaders, arguing that to do so "would become a distraction to the mission of the BSA."

Watching a handful of local chapters mobilizing to defy the new 'don't ask, don't tell' policy, David sensed an opportunity to move the needle. A boy's final step to earning his Eagle badge is to "plan, develop and serve as a leader to others in a service project helpful to his religious institution, school,or community." And so was that last month, a council of Scout elders found itself navigating in uncharted territory.

The men listened thoughtfully as the teenager stood in front of his brightly decorated tri-fold presentation board, nervously explaining the backstory: In 2008, after an incident of gay bullying at my public elementary school, Nettelhorst, concerned parents organized a diversity committee to help foster a culture of tolerance and respect, not just for gay kids, or kids of gay parents, but for all kids. To drive the point home, the group co-opted our annual Fence Project, arranging the colored fabric strips into the pride rainbow sequence, and posting this little sign:

Each Nettelhorst student has tied a piece of fabric to the fence as a tangible sign of his or her personal intention to create a better world. As Nettelhorst, we've also made a collective intention: that each of us becomes kinder, gentler and more tolerant. Here, the rainbow colors of gay pride are a visible sign of our respect for the neighborhood of which we are a part, and the diversity of families that we serve. In June, Nettelhorst will be the first public school to walk in Chicago's Gay Pride Parade. We believe family means everybody. Enjoy the summer: SPF 50, baby!

Many a passerby stopped, smiled, tweeted and posted; some even cried. The rag-tag public civics lesson had inspired a deeply personal, neighborhood catharsis.

But when the Chicago Tribune ran a front-page story cheering our efforts, Nettelhorst landed on every hate blog in the country. We even had the "God Hates Fags" Westboro Baptist Church up from Kansas protesting. Critics accused the school of corrupting innocent children, and using them as pawns in a decidedly liberal social agenda, all on the taxpayer's dime no less.

Under death threat, 200 Nettelhorst families marched in the parade that year; in fact, we led it. The outpouring of support from the 140,000-strong crowd was overwhelming, as if we had taken away generations of hurt in one surreal-therapeutic-Kodachrome coronation.

"It takes real courage to stand tall against bigotry," State Representative Sara Feigenholtz said. "While I've been fighting tirelessly for basic human rights legislation in Springfield for years, what's incredible is that these children have shown us what it truly means to value equality, dignity and each other."

Chicago's first openly gay Alderman, Tom Tunney, who marched in the parade proudly wearing his Nettelhorst Pride t-shirt, professed that, "Time will show on this day, Nettelhorst was on the right side of history."

Now, seven years later, the original parent organizers are finally seeing the change they imagined. "We started this movement to teach our children to stand up for each other and for our community," explains Brad Rossi, the gay father of a Nettelhorst seventh grader. "If they've learned that a small group of thoughtful citizens can change the world, and believe themselves to be part of that group, public education will have served its most important function."

As in years past, every Nettelhorst student tied a piece of fabric to the fence, and made an intention to make the world a better place. The tangible expression of those intentions lured in curious neighbors just long enough to read the laminated sign explaining the project, with one additional paragraph, unthinkable just four months earlier:

This year, David Fite of Boy Scout Troop 115 chose the Nettelhorst Pride install as his Eagle rank community project. The Eagle rank is the highest advancement a young boy can achieve in the scouts -- and by leading and completing the Pride projects at Nettelhorst Elementary School, he not only shows that a boy scout must be prepared, but kind, respectful and understand that love is what we all have in common.

Next to the fence, at the corner of Aldine and Broadway, stands a forty-foot ash, one of the few trees to survive America's devastating emerald ash borer infestation. David's troop leader climbed a tall ladder to hang disco balls from the branches; fellow Scouts wrapped the trunk in colorful ribbon; Nettelhorst kindergarteners sprinkled the decaying wood chips that cover its roots with glitter. When the new "I DREAM" tree was all finished, David penned the first tag with a Sharpie: "I DREAM... of a day when ALL Americans are free to love and to be loved in return." -David Fite, Eagle Scout Candidate, Troop 115. 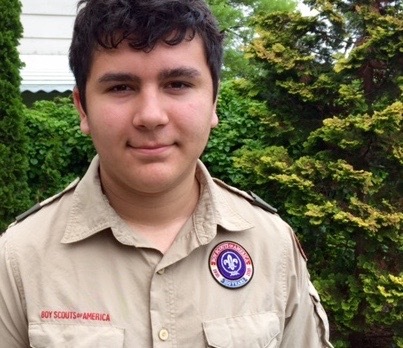 Want to add your own dream? Leave a comment below starting with "I DREAM..." and David will post it on the tree in your behalf. 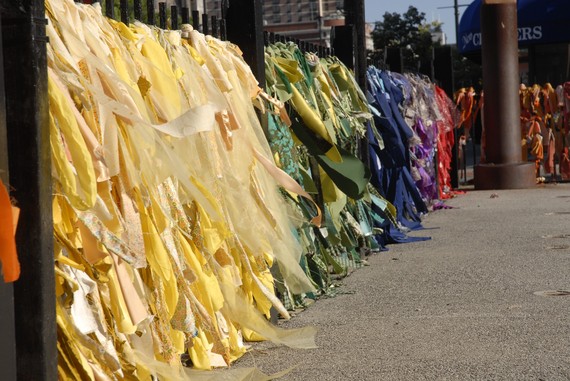