The 9-year-old asked his doctor at the Children's Hospital Colorado, Christine Waasorp Hurtado, if his stuffed friend could get surgery too.

"His parents said, 'No, no, no, they don't do wolf surgeries here,'" Hurtado told The Huffington Post. "They said they'd get him fixed up at home."

When he woke up, his pal had a fresh set of sutures, a hospital mask, and a new bandage.

His father, Kevin Wade, posted a picture of of the adorable scene to Facebook. A family friend then submitted that heartwarming picture to CNN's iReport. 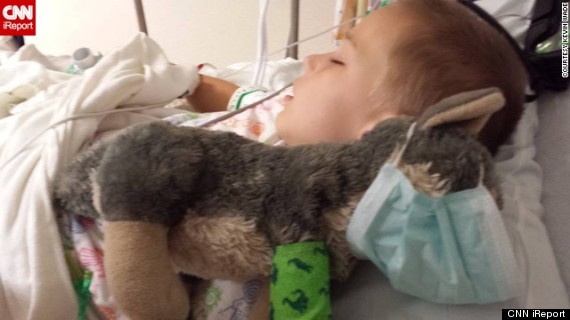 "I saw Joshua a few minutes after he'd woken up," Hurtado said. "He was still pretty sleepy but he was very excited. He was full of smiles and happy with his wolf."

The pediatric gastroenterologist told HuffPost that she's stitched up stuffed animals for her patients a couple of times before.

"If a kiddo comes in and makes a big deal over a doll or teddybear with a boo boo, I'll fix them up," Hurtado said. "We want them to feel like a loved one is going through something similar. It distracts them."

Kevin Wade was clearly touched by his son's doctors' actions.

"Joshua spent his initial moments in recovery focusing on his wolf rather than any discomfort from his procedure. Fighting back tears I thanked the doctors and nurses," Wade wrote on Facebook. "It was such a sweet gesture by busy, but caring professionals and I will never forget it. Neither will my little boy."

Joshua Wade, 9-Year-Old Boy, And His Stuffed Wolf Get The BEST Medical Treatment (PHOTO)
Dogs Are Family For Life