On a late Tuesday afternoon, April 8, 2014, I attended a rally sponsored by the JCC protesting UJA's inclusion of "extremist anti-Israel organizations" to march in the Celebrate Israel Parade on June 1 in NYC. JCC, joined by Americans for a Safe Israel (AFSI) and other organizations, along with prominent spokespeople and supporters, were demonstrating their objections to the inclusion of Partners for a Progressive Israel, and others, who are calling for a boycott of "Settlement products sold in the US" like Ahava cosmetics, SodaStream and wines from nine Israeli vineyards. "Boycott, Divest and Sanction," they urge. And Partners for a Progressive Israel, along with the New Israel Fund (NIF), B'Tselem (the organization who produced the infamous and controversial video, "Israel Apartheid 2012"), are also being allowed to march in the parade to advocate this boycott. Partners for a Progressive Israel has published a lengthy list of Settlement businesses and products to boycott.

I went to learn. I went to experience this cause. And candidly I went with a bit of a preconceived notion based on some very limited knowledge of this complex and complicated situation. To wit: virtually the entire free world has objected to the Jewish influx of people and businesses, and the ongoing construction of buildings to accommodate them, in the Settlements in the West Bank, Golan Heights and East Jerusalem. The international community considers these settlements in occupied territory to be illegal. The UN has repeatedly upheld the view that these settlements are in violation of the Fourth Geneva Convention. So has the International Court of Justice (all of which I read on the train in to the city Tuesday, from Wikipedia). I'm also familiar with the assertion that " ... the ongoing expansion of existing settlements by Israel and the construction of settlement outposts is frequently criticized as an obstacle to the peace process by the Palestinians." (Wikipedia).

And I know that Prime Minister Benjamin Netanyahu has more than once pledged to halt Settlement construction and then allowed it to go on, seemingly contradicting himself and established international law, adversaries claim.

I also went to the demonstration with a belief in the First Amendment and its guarantee of free speech in America. And isn't the parade a prime example of free speech -- albeit controversial and objectionable to many?
 
It's not that simple, I was soon to learn, not even close; something most of you know already.

I met and talked with Richard Allen, founder of JCCWatch.org, a passionate and interesting man. "Jews don't boycott Jews," he said. "It violates basic Judaic law." I asked him what his ultimate answer was, vis a vis the Palestinian conflict. "Doesn't Palestine have a right to exist," I asked. "All we want is a safe place to live," he said, and would go no further. It's more complicated than that, he said, and besides he was convinced that I was on a reporting mission, since he learned that I write occasionally for the Huffington Post. Not my mission today, I said. When I left he knew he'd made an impression on me, and even asked if I might help get the word out, given my background. "Zero budget," he said, "but the word's already out all over the world." He has my card. 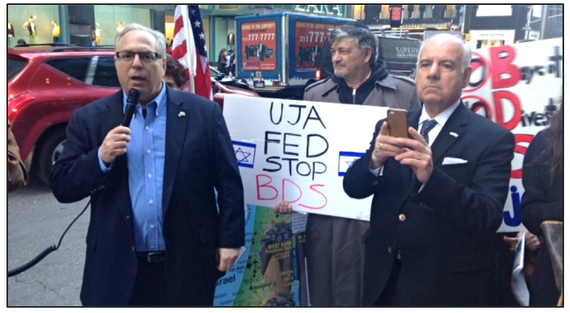 Rabbi David Aglaze made an incredibly moving and articulate speech. Pointing up to the UJA building he proclaimed, "You are neither democratic or Jewish!" Aglaze is "... the founder and spiritual leader of Havurat Yisrael, the modern reflection of a rabbinic family in the Sephardi tradition." He founded the Coalition for Israel in 1989. (www.davidaglaze.com). 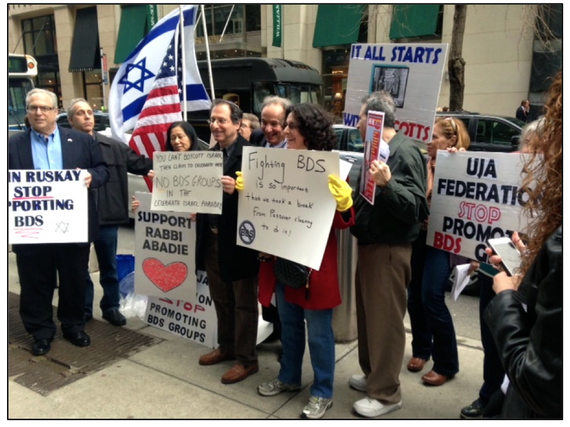 The above picture reveals one of the signs used in the demonstration. The message: "It starts
   with boycotts." The photo (which is difficult to make out; see below): a Nazi soldier posting a "Do not buy from Jews" sign on a Jewish business in Germany - in 1933.

First, the following must be acknowledged: The Nazis' perverse motivation for their boycotts stemmed from an evil desire to quash an entire people, all Jews, which in a few years would evolve to their horrific "ultimate solution," the Holocaust - the most repugnant crime in the history of mankind. Today, the UJA, and its parade supporters, are urging a boycott of those Jews' businesses in the Settlement - because fundamentally they object to the occupation of the Settlement areas and those who support it. Important contextual difference. Having said that ...
Seeing this sign crushed me. 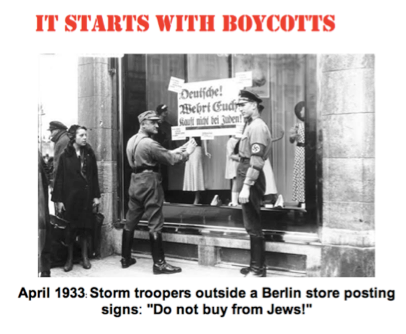 I don't pretend to understand all these issues, but I certainly gained an appreciation, if not an affinity, for the objections raised at this demonstration against the UJA allowing, no, endorsing they would say, fellow Jews who are determined to destroy thriving Jewish businesses throughout the Settlement. "These businesses employ more Palestinians than Jews," said Allen. "Even the Palestinians do not want their source of workers income to go away." Hard to ignore this perspective, and I'm not. That's about all I know about all this. It's divided. It has emotional, passionate support from both sides and there is no black and white answer to any of it, near as I can tell.

"All we want is a safe place to live," said Richard Allen. And who could object to that? Certainly not me.

The executive director of Americans for a Safe Israel, Helen Freedman, and Marc Langfan, a widely published columnist and writer -- both of whom I also met and talked with -- also made passionate speeches, as did others, including Mark Webber, a prominent attorney and advocate. All in all I came away from this experience with increased appreciation for the difficult issues Israel is facing, and their commitment to realizing their destiny. And yet the worldwide Jewish community is divided on these issues.

   By the way, Scarlett Johansson was an Ambassador for Oxfam (a worldwide organization dedicated to "finding solutions to poverty." In a seeming contradiction, Oxfam opposes all Jewish-owned businesses in the Settlement. Johansson made a television commercial for SodaStream, the West Bank's largest business and biggest employer, in support of their right to have a business
in the West Bank. And this February she resigned from Oxfam over this fundamental disagreement.

(All photos taken by the author).