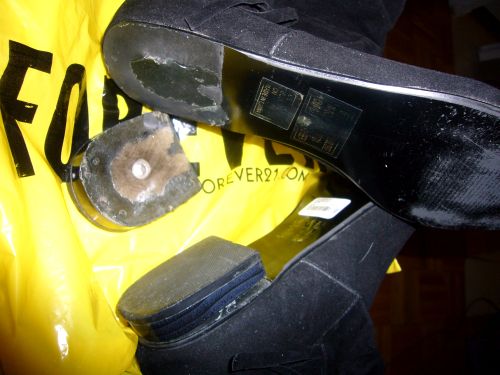 While the economy may be in an official recession and fast fashion more popular than ever, I beg of you, my fellow fashionistas and fashionistos, rise up with me and boycott the soulless polyester strewn hole that is Forever 21.

I am slightly ashamed to say that I once was a big fan of Forever 21. The whip-fast trendy knock-offs are uber appealing to those with meager budgets and big style dreams. And who cares if it's a polyester blahblahblah blend instead of silk, or even 100% cotton, if it's only an of-the-moment style, right? With so much disposable style at my finger tips, my closet quickly clogged with a sludge of going-out dresses and threadbare blazers. And while I swanned over how much money I saved, I still spent a small fortune on the piles of clothes, for my brain was screaming "quantity, not quality!"

Much like when I was even younger and actually enjoyed escaping to Canal street and bartering with the shifty "sales people" hawking cheap counterfeit purses, I found delight in finding an almost identical designer knock-off in the racks at Forever 21. And for a while I ignored the almost daily articles on Fashionista that pointed out the designer originals that Forever21 had knocked off, and skipped over any talk of law suits regarding said "recreations" filed by the designers. Didn't they have enough money? What difference did it make to them if someone copied their print/pattern/entire design, right? Right??

But the deluge of copyright infringement started to wear on my conscious. I felt exposed in my imitation Proenza Schouler bustier top or shiny white Chloe-esq shoes. Could people know I was faking it? That I had only shelled out thirty bucks for a known rip-off instead of splurging for the original, that I had forgone quality and now had a rash from the phony Pucci sweater creeping up my back, punishing me for slumming it with the leader of all shams? Regardless of if anyone else was aware of my cheapness, I knew what I was doing, and I knew it was wrong.

Then, in the middle of my financial/style dilemma I came across two other issues simultaneously. One, in the middle of all the lawsuits being thrown from established (and up-and-coming) designers, it came to light that Forever 21 was using sweatshop labor. Or rather (to avoid being sued myself), their "contractors" were using sweatshop labor. Forever 21 denied having any knowledge of such tactics, (no surprise there), and laid the blame solely on the contractors. So, to add on the expanding pile of lawsuits filed by the aforementioned ripped-off designers and companies, (Anna Sui, Diane Von Furstenberg, Bebe and Gwen Stefani, to name a few), Forever 21 has also been battling lawsuits that were filed by several advocacy groups in protest of the grotesque standards to which their "contracted out" sweatshop workers were subjected.

The second issue, and more personal one at that, is regarding a pair of black fringed ankle boots that I purchased during my annual Black Friday shopping this year. At $29.80 they weren't the cheapest thing at Forever21, but still an enormous savings compared to the Steven Madden ankle boots they so transparently copied. I slipped my legging clad legs into them and strutted around the following day, pleased with my new purchase.

Two days later I wore them to work, and noticed that they made a peculiar clacking sound when I walked. I glanced at the shoe, assuming that something had gotten caught and found my chunky plastic heel dangling by a thread. Or rather, by a nail. All the cheap horse glue they had used had worn off after being worn twice, and the only last shred the heel had to hold onto the sole of the shoe was resting in a meager nail. Which promptly severed five seconds after I continued my gait. I hobbled back to my desk, heel in hand, jagged nail catching on the carpet as I limped. Well, no worry, I assumed, as this is obviously a defective product and they will no doubt allow me to exchange for new boots or at least offer me store credit. I changed into my co-worker's spare shoes, and took off to Forever 21, receipt in hand, price sticker still pristine white flashing on the sole of the boots.

Upon entering the store, I bee-lined to the nearest store clerk and explained my story to him regarding my shoddy twice worn boots. He sneered apathetically, and said "Sorry, if you wear it once, we can't replace it." I implored him, surely he can see they were barely worn- the soles practically unscuffed and the price tag still gleaming white and attached to the bottom of the shoe. He shrugged and began to turn away, pissing off my inner bitch. I asked him to get me the manager, to which I was directed to go upstairs and "find him yourself."

I tried to explain that I could not possibly know what the manager looked like, and how it would be tremendously easy if he could page the manager to come to me. Responding as if I had asked him to lop off his arm for my amusement, the store clerk moaned and began muttering to himself as he picked up the store phone and requested the manager to come downstairs. I stood there waiting, watching other suckers spilling their hard-earned money onto the counter to buy cheap strips of fabric that were sure to bleed, rip or shrink after one wash, wishing that I could start screaming, begging them not to repeat my mistakes. But instead, I waited calmly.

Fifteen minutes passed, as well as two more calls to the manager before someone declaring himself "Manager" approached me. He repeated what the sales clerk told me, shoved my receipt away and began to storm away. My blood began to boil and I demanded compensation. I spent almost thirty bucks on their cheaply made boots and only got two wearings out of them. That's fifteen dollars per wear! My Christian Louboutin pumps have cost me less than fifteen dollars per wearing at this point. The manager continued repeating himself, saying it wasn't his problem, I wore the boots already, oh well, my issue not his, etc. In the end I was sent away, the rusty nail from the heel ripping the yellow plastic bag as I stormed out, fuming over the lack of customer service.

So that's it. I have had enough. Between the atrocities Forever 21 has placed its' workers in, the various lawsuits that are increasing every week, and now this personal insult, I will never shop at Forever 21 again. And while I know I'm not alone in this boycott, I urge all other consumers to join us in our fight against the cheap clothing giant known as Forever 21.

Please feel free to contact the Better Business Bureau or complain at these sites: