I don't usually find flipping through the Christian book catalog to be an uplifting experience. Take the one that was waiting on my front porch this week...

There's yet another children's book reducing the gospel to a formula. There's one reinforcing the notion of heaven as a disembodied reality "out there" somewhere.

And then there was this. 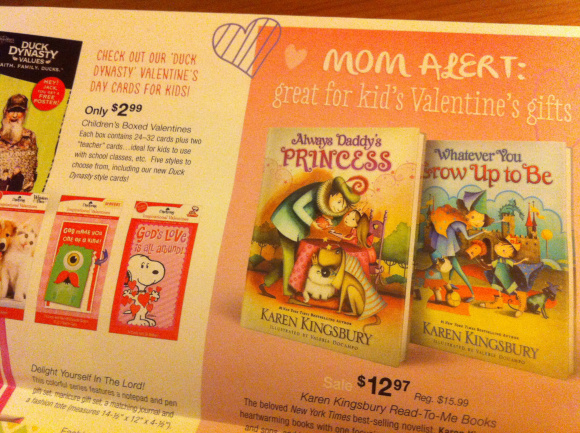 It may not be the author's intent to limit boys and girls to these predefined roles. But do we really need another set of products perpetuating the notion (intentionally or not) that boys can choose their identity, while girls' identity has been determined for them?

This gender stereotype is pervasive in our culture. If you don't think so, try raising a daughter.

Try counting the number of children's TV shows with a female lead -- Dora the Explorer, for example -- versus those with a male lead (along with, perhaps, the occasional female sidekick): Jake and the Never Land Pirates, Super Why, Caillou, Handy Manny, Justin Time. You get the idea.

Try fending off the Disney princess juggernaut which, for all the refreshing progress of recent films like Brave and Frozen, still rakes in billions teaching girls that their main source of value lies in their appearance and their desirability to men.

Now, my daughter loves pretending to be a princess. She insists on wearing a dress every day. We run through tights like there's no tomorrow. And she wants to be a ballet dancer. (She also loves trucks and airplanes and thinks farting is hilarious, for what it's worth.)

The fact that she likes dressing up as Cinderella doesn't necessarily mean she'll grow up thinking she's inferior to men. But as a parent, I'm learning that I have to be intentional about reinforcing her equality. She's only 3 years old, and already she's made comments like, "Boys can do this, but girls can't."

This breaks my heart. It's a sobering reminder of how our culture bombards girls with a message of inferiority, a distorted view of their own value. It's a reminder of how, despite all our efforts, the propaganda of inequality still manages to get through to my daughter.

The irony is, those in the church who insist on a hierarchical distinction between women and men think they're being countercultural, that they're going against the grain of this world and that this somehow proves them right.

The reality is anything but. Those who think patriarchy is a virtue are unwitting accomplices to Disney's princess-ification of the world. They're simply dressing up our culture's subjugation of women in religious garb.

And it's time that stopped. My kids deserve better than another set of books telling boys they can be whatever they want, while girls should stick to being princesses.

Ben Irwin is the author of a forthcoming children's book and blogger at benirwin.wordpress.com, where this post first appeared.