It's now gotten to the point where we don't even have to mock BP or criticize them for ruining the Gulf coast. They'll do it all themselves.

The UK's Metro has discovered a BP branded board game from the 70s titled "Offshore Oil Strike." Letting players take on the role of oil tycoons, they face the "hazards and rewards" of offshore drilling. It serves has a hauntingly ironic prediction of recent events. And a mindblowing addition to the ridiculousness that is BP.

Perhaps the creepiest part? The foreboding 'hazard cards,' which read 'Blow-out! Rig damaged. Oil slick clean-up costs. Pay $1million.' If only it was that easy.

You have to imagine that whoever created this game has nervously been counting the days until this baby got discovered, praying that it was lost in the back of some Toys R' Us storage facility never to be seen again. Nope. It's here and is a weird reminder that this could've been avoided. (h/t Bartunde Thurston) 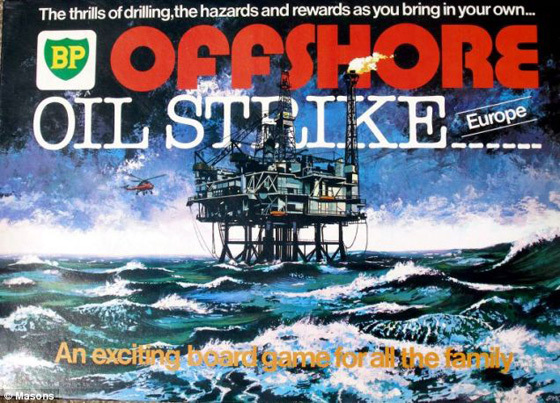