Over two years after the disastrous BP oil spill wreaked havoc on the Gulf, Greenpeace has received photos of the destruction inflicted on marine life in the area.

According to a Greenpeace press release, the environmental group filed a Freedom of Information request in 2010 for the photos -- their request was one of over 50 FOIA requests submitted by Greenpeace to various agencies regarding the oil spill.

The spill occurred after an explosion on the Deepwater Horizon drilling rig killed 11 workers on April 20, 2010. Far surpassing BP's initial estimates, about 50,000 barrels per day flowed from the well over the course of three months, according to a government-organized scientific team.

The Greenpeace press release states that the photos, many focused on oil-covered sea turtles, "appear to be part of the effort to collect evidence for the prosecution of BP and others."

The trial to assign damages for the oil spill has been delayed until January 2013. Last month, former BP engineer Kurt Mix became the first to face criminal charges from the disaster. HuffPost's John Rudolf reported that more arrests related to spill estimates are likely, according to legal experts.

The Deepwater Horizon Natural Resource Damage Assessment (NRDA) Trustee Council recently announced that they were kicking off a $60 million series of early restoration projects along the Gulf Coast.

Of the five turtle species in the Gulf of Mexico, four are endangered and the fifth species is threatened.

Greenpeace's John Hocevar stated in the organization's press release, "While the White House was trying to keep the emphasis on rosy stories of rescued animals being released back into the wild, they were sitting on these images of garbage bags full of Kemp’s Ridley sea turtles.”

View the photos below by NOAA, courtesy of Greenpeace: 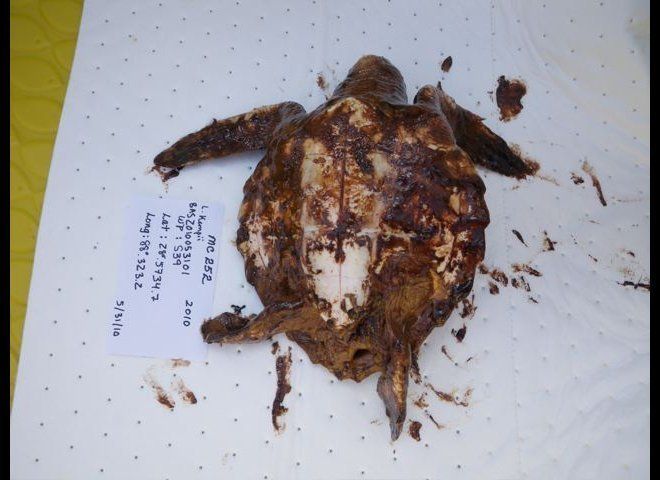