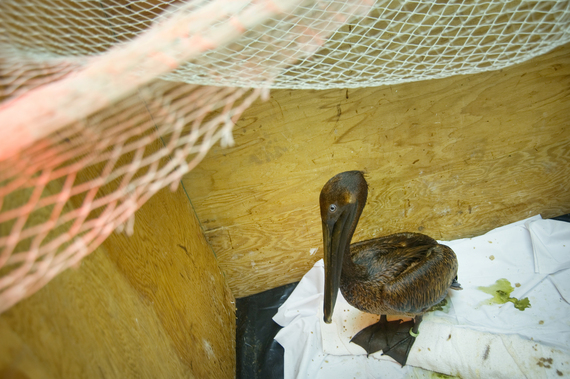 A Brown Pelican waits to be cleaned after the Deepwater Horizon spill in 2010.
Credit: Kim Hubbard/Audubon

Thanks to a judge's ruling, BP finally has to pay for what it broke on the Gulf Coast. And the Gulf states can shift their focus to repairing the damage done and building a more resilient coastline.

It's been six years since the BP explosion spewed more than three million barrels of oil onto the waters and shores of the Gulf of Mexico in the worst maritime environmental disaster in our nation's history. Eleven oil workers died, marshes and beaches were slicked and hundreds of thousands of birds were killed or badly injured as oil coated the birds and their nests at the height of nesting season.

Earlier this month, U.S. District Judge Carl Barbier approved a $20.8 billion settlement with BP for its role in the April 20, 2010 Deepwater Horizon oil disaster. The oil giant will pay out the billions over the 15 years as a penalty for what the court ruled was "gross negligence" in the spill. It is the largest government settlement with a single company in U.S. history.

Unsurprisingly, some Gulf state politicians are already seeing a cookie jar when they ought to be seeing restored wetlands and healthy beaches for people and birds. The law that directs BP's massive penalties to be used for coastal restoration is called the Restore Act for a reason. It's not called the "build a convention center act" or the "use this money to make politically-motivated decisions act."

With the courtrooms behind us, it's time to get to work. We need take advantage of this once-in-a-lifetime opportunity. Every dollar of that money is needed to restore the vanishing wetlands that are the first line of protection from powerful storms like Katrina and rising sea levels for coastal communities and their economies. Those dollars will also preserve the homes for birds, wildlife and fish that provide jobs and joy to coastal residents and visitors.

In Louisiana, where the Mississippi River Delta is critical to the overall health of the Gulf, this means rebuilding a coast that is disappearing at the rate of one football field every hour. For decades, we've been straightjacketing the Mississippi River to make it easier to get gas, oil and other goods from the Gulf to New Orleans and points north. Some of the settlement money can be used to re-create what nature would normally be doing by placing controlled gates and channels along the river that will be opened periodically to allow sediment--basically food-rich mud--that flows down the Mississippi to replenish wetlands. Undoing centuries of abuse of this natural system - the seventh largest delta on the planet - will be crucial to the region's long-term survival. Across the Gulf, we need to prioritize shoreline restoration and stewardship of nesting sites, so bird and other wildlife and fish populations return to healthy levels.

This also means walling off coastal restoration dollars to make sure that the settlement money goes to environmental restoration and is not siphoned off for pet legislative projects.

We only have one shot at getting this right. To do that, all of the state and national actors need to make sure that settlement dollars are distributed through comprehensive and coordinated plans that prioritize environmental needs and select the best projects available to fix America's Gulf. This means federal agencies working together, states coordinating with each other, conservation organizations having a seat at the table and citizens remaining engaged and involved.

Louisiana, where the disaster occurred offshore and which suffered the most damage, has developed a big, ambitious plan for restoring and protecting the coast. It can be a model for other states. Gov. John Bel Edwards, who inherited a massive deficit from a predecessor, recently issued an executive order requiring all state agencies to support and follow the plan. That was an important move.

The Gulf will not know justice until all the settlement dollars are spent on the best projects available to restore it. If we get this right, we can provide a model for regions around the world facing environmental degradation and threats from climate change.

We need to doggedly name and shame the opportunists who try to divert money that is so critically needed to jumpstart the restoration of the wetlands and coastlines. They are not only robbing the till, they are robbing future generations.

The American people and courts held BP accountable for the extensive damage it caused the people, birds, wildlife and communities of the Gulf Coast.

Now it's time to hold our public officials accountable for spending the money as it was intended--and where it can do the most lasting good to protect our threatened coastlines.

David Yarnold is President and CEO of the National Audubon Society.