There is little arguing that three weeks after the initial explosion that sunk, the Deepwater Horizon BP and their executives look insensitive, irresponsible, callous, and, at present, largely unaccountable for their actions. Compounding their woes even further is the childish display that they, Haliburton, and Transocean put on for the public as they shrugged responsibility and instead pointed the finger of blame at each other in front of congress. But contrary to these recent events, BP has worked, and will continue to work, relentlessly to preserve their public game face. Unlike their recent failure in the gulf, BP has excelled in maintaining a market and graphic identity that communicated the misconception that they were a company that was green, sustainable, and far from being just another oil company. That same savvy PR manipulation has set up camp in the fallout of the Deepwater Horizon spill, and is actively hindering the efforts of volunteers. 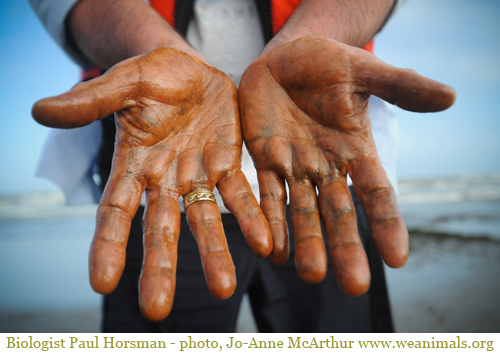 What is happening right now in the Gulf of Mexico and along the Gulf Coast is death in the most literal sense. A dark, viscous, suffocating blanket of filthy black death is being handled by the same agency responsible for the marketing and logistical genius that cooked up the friendly green and yellow logo we have all been bedazzled by as we roll past it posted up on the sides of highways like giant aluminum sunflowers.

Green and yellow communicate springtime. The flower/starburst pattern extols a sense of blooming, conception, life... a perfect package if you are trying to alter the feelings associated with the reality of the product you are selling. Petroleum is the antithesis of the BP graphic identity. Petroleum is a black, filthy, extortive substance that has become the center of bloody global conflicts over who can obtain and control the trade over the most of it. To package such a substance as friendly takes a degree of public relations and marketing genius. When the Deepwater Horizon rig exploded and millions of gallons of crude began to climb to the water's surface, the public relations geniuses were dispatched to the Gulf before clean up volunteers could even attend their first training.

BP's primary PR objective was damage control. This damage control was both immediate and forward-looking. Immediately they would need to dominate the coordination of press in the Gulf states. Second, they would need to pacify the people whose livelihoods would be directly impacted by the oiling of the waterways. Within five days of the disaster, reports started coming in of coastal residents being approached with contracts that equated the forfeiture of their rights to file claims against BP. Many local workers signed these in exchange for temporary paid positions as part of the marine cleanup.

BP's next PR objective would be to selectively impact the way the nation would view the problem. This would be done by highlighting positive news in press materials and releases, while minimizing the media's contact with the worst imagery related to the spill. Specifically, press that is on location will receive ample notification of the successful cleaning and release of a handful of oiled shorebirds, while simultaneously be limited access to oiled shorelines by private and public security forces that are citing issues of health, private property, and security. BP is working tirelessly to vet what information and visuals related to the spill are made available to the public. "BP is being very smart. Friendly and compliant on the surface but beyond that, very tactical in their maneuvers with the media," states a contributing editor to a major news outlet who wished to remain anonymous for fear of being stripped of her already limited press access. "They've told every BP-hiree not to talk. They've created designated 'media hours of operation' as well. There are virtually no official boats available to the media in the Venice area. But the oil is hitting land, and they can't hide an entire coast line."

Perhaps one of the worst examples of the mishandling of the spill is the use of chemical dispersants that coagulate the surface slick into dense clumps that sink. One does not need a degree in hydrology to understand that this process is about sinking the spectacle of the slick below the surface of the Gulf and into less visible subsurface waters. A submerged problem is no less a problem; the introduction of a foreign chemical into a marine habitat is a problem in itself, and a subsurface cleanup is far more complicated than collection and removal on the surface. However this tradeoff mirrors more of this reoccurring theme of "out of sight, out of mind" that has become a central narrative in BP's PR response to the disaster. No different from the theory behind the BP company logo, the response to the disaster includes a race to manipulate the way the public will view the problem.

"BP is going to reckless lengths to cover up the severity of the catastrophe they caused," says Tod Emko, of The Sea Shepherd Conservation Society. "Not only are they preventing volunteers and media from getting to affected areas, but they're also telling trained, licensed wildlife rehabilitators not to take action outside of BP-organized beach cleanups in areas that have not been hit by oil. Imagine how much good BP could have done if they devoted even a fraction of their cover-up budget and resources to bringing in help and allowing trained professionals to aid affected areas. Instead, we can only marvel at the amount of additional suffering they're causing the Gulf ecosystems and its inhabitants through their present actions."

Emko's sentiment is not a unique one. Many local residents, volunteers, and even law enforcement officials are beginning to question how BP, a foreign, non-governmental agency, can exercise jurisdictional authority over the volunteer response efforts. Kelly Overton, whose organization People Protecting Animals and Their Habitats (PATH) is helping to collect supplies needed by volunteers, criticized BP's handling of the mess which they themselves created. "The birds, the fish, the water, the beach...they are not the property of BP" says Overton, "why is BP being allowed to determine who helps the flora and fauna they themselves have harmed?" In an effort to draw transparency from BP officials, PATH has begun using their Twitter account to broadcast a daily estimated marine wildlife death toll. PATH claims that as of May 18th, upwards of 14,449 marine animals have been killed due to oil exposure. PATH calculates this number daily from the sum of oil expelled from the riser into the gulf and prior wildlife die-back statistics as they result to oil exposure. Wildlife rehabilitation workers and marine biologists suggest that this may be a conservative estimate when considering the myriad bi-valves, bottom feeders, and subsurface creatures that will undoubtedly be impacted. Subsequently, species that feed on these creatures will be affected, albeit not immediately and perhaps BP hopes this lag in bio-magnification will be long enough for the news cycle to pass and for some people to forget. It is unfortunate for all of these species that they too will fall into BP's "out of sight, out of mind" response approach.

But the levy of "out of sight, out of mind" may be a levy that is about to break. Tension fills the air in Gulf Coast communities amidst fear of lost jobs, lost tourists, and the related revenue they generate. In towns like Biloxi, Mississippi, you can see struggles of class and earth liberation begin to gel together as one and the same. Perhaps it will be to BP's detriment that otherwise apolitical Gulf Coast fishing communities are getting a crash course in ecology and anti-corporate sentiment.

Another unique by-product of this disaster is an explosion of self-appointed muck rakers, many who have no background in direct action or activism. A Google search of the gulf oil spill returns 6,865,009 blog entries referencing the event. It is in social media tools that some of the best instant reporting and editorialization is happening. Whether it is Rising Tide North America using their Twitter account to warn volunteers that migrating dolphins will travel through the spill zone, or ethical fashion blogger Joshua Katcher -The Discerning Brute, encouraging his fans to challenge the "glitz" of BP's heavily funded PR agency and internalize a bitter truth that our relationship with nature is an abusive one. In his posting "Black Blood in the Water" Katcher writes that the spill is analogous to an arterial bleed and brutally draws parallels between the anthropocentric force we exert on nature and patterns of domestic violence...

They promise not to hit us again. They apologize, and say they didn't mean it. They tell us not to leave them, and each time we want to believe that they really do love us. "This time...", we say, "This time they really mean it."

If BP hopes that a policy of "out of sight, out of mind" will help them limit accountability, then it is our duty to shed light on this disaster, to create a spectacle in any media accessible to us, and make absolutely sure that this ongoing tragedy stays on people's minds. It is essential that both the media and volunteers reclaim access to the relief efforts. Similarly we should also make an attempt to reclaim the valuable ad space within ourselves that BP has so smugly painted green and yellow. We need to challenge our notions that everything in this world is inexhaustible and put here solely for human use. We need to realize that this spill is just a flare up in a chronic illness that still needs to be addressed. Our relationship with nature is a sick one, and the healing begins with healing ourselves. If you look deep inside yourself you're bound to find your own personalized billboard with a friendly green and yellow flower pattern telling you that the problems of this world are outside of your reach and are little to worry about. You owe it to yourself to douse that billboard with black paint. If a lasting change will come out of this, it will have to come from each of us. All of BP's greenwashing can't do anything to clean up the Gulf Coast. Every BP billboard, BP logo, and bit of BP signage should be defaced with colors that seem more fitting. It is noble to forgive, but to forget would be to allow this to happen again...