UPDATE, July 21, 2010: Over at Gawker today, Brian Barrett has another shop-up job from BP's website that is even more comically fake than the one of the command center. Floating control towers! Water that magically changes colors! Boats that appear to vanish! (Maybe the Bermuda Triangle has moved to the Gulf of Mexico?)

At some point, you have to wonder if the all the resources BP is devoting to fake photographs might be put to better use!

Additionally, John Holland at Daily Kos performs an error-level analysis of yesterday's photoshopped image and finds that "there's an awful lot of cut-and-paste going on in those monitors, suggesting that the original images you see of the Deepwater Horizon are bogus, and are added later."

The latest curio in the ongoing exhibition of BP obfuscation comes via John Aravosis at AmericaBlog, who examined an image from BP's website and determined it to be a fake. The image depicts BP's "Command Center" in Houston, where ever-vigilant BP employees sit in a dark room, monitoring screens. BP's website has been running a photo in which three men appear to be watching a ten-screen display of oil-spill footage. Here's the thing: it's a Photoshop job. And not just a poor one -- a seemingly unnecessary one.

Here's the one BP was running: 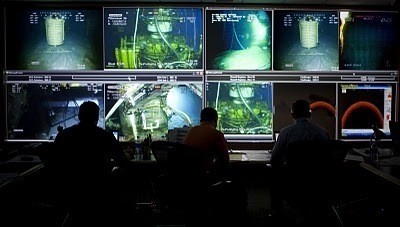 And, via Max Read at Gawker, here's what this photo looked like, prior to the alteration. 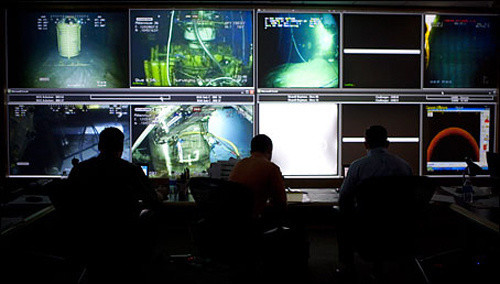 Aravosis has about seven or eight detailed images which demonstrate the terrible masking job done by the photo-surrealist in charge of mocking up the image for public consumption. Naturally, BP has chosen to blame its photographer for the confusion. For any of you who are more gifted at faking photos, this represents a potential employment opportunity. (AmericaBlog also points out that the metadata on the photo indicates that the image in question was taken in March of 2001, which means either the photographer doesn't know how to use his camera, or BP is, as they say, "lying."

But Read asks the pertinent question: "Does that really look so much different that the Photoshopping was necessary? Were they so afraid of the withering comments of bloggers noticing three blank screens that they thought they should paste in three duplicate images?" Exactly! Who would have cared if there were three blank screens? Who would have faulted BP for the failure to run a more-or-less content-free photo of their Command Center in the first place? It's almost as if BP is somehow, first and foremost, obsessed with PR?

Oh, wait, that's right, they are! Let's leave the world of Photoshop and turn to a more pressing matter. The well, as you know, is capped. However, there have been broad reports of "seepage" away from the site, as pressure builds on the capped well, the oil may be leaking -- sorry, "seeping" -- elsewhere in the Gulf. Government officials want to relieve the pressure by pumping the well oil up to waiting ships. BP wants to keep the well clamped. This AP report explains why:

The company very much wants to avoid a repeat of millions of gallons of oil spewing from the blown well for weeks, watched live across the country on underwater video.

If the valves are kept closed, as BP wants, it's possible that no more oil will leak into the Gulf of Mexico. Work on a permanent plug is moving steadily, with crews drilling into the side of the ruptured well from deep underground. By next week, they could start blasting in mud and cement to block off the well for good.

But the government is worried that the cap on the well is causing oil and gas to leak out elsewhere, which could make the sea floor unstable and cause the well to collapse. That's why federal officials want to pump the crude to ships on the surface. That would require opening the well for a few days to relieve pressure before the pipes could be hooked up, letting millions more gallons of oil spill out in the interim.

I'll let Sarabeth Guthberg, who finds AP's work here to be slipshod on top of everything else, hammer this home:

They deliberately want to avoid the first-best solution and plump for a much riskier second-best, driven entirely by PR considerations?

And pretty damn foolish PR considerations too. Everyone who was going to be upset due to watching the live video feed is already as upset as they can possibly be. The live video spectacle resulting from opening the well again for a few days (in order to make the whole system safer) really can't make them any more upset. To refuse to relieve pressure in the well only to avoid having any more live video of oil spewing from the blown well is truly insane.

But what makes the story even more disturbing is that BP has a clear ulterior motive here, over and above the PR considerations that AP ascribes to the company.

And that ulterior motive is BP's desire to keep the total amount of oil released into the Gulf as murky as possible, because ultimately, that figure will determine the organization's total liability.

So why does a Photoshop image matter? It matters because of the pattern. A seemingly superfluous image on a website, the dispatching of a team of fake reporters, the deliberate -- potentially dangerous -- obfuscation of oil spill flow... these actions all spring from the same desire, the desire to deceive. The Photoshop incident only proves that BP is willing to go the extra mile to do so.