October 21-27 is Brachial Plexus Awareness Week. My desire is to introduce an approach to working with children who have suffered injury to the brachial plexus that provides breakthrough possibilities. This approach is based in taking advantage of the remarkable capacity of the brain to change itself and "map" in the brain the affected arm, despite the injury. These possibilities for gaining full, or almost full, functioning are available through the "NeuroMovement" approach of the Anat Baniel Method.

The story of Grace, a 13-month-old child who suffered a severe brachial plexus injury to her right arm and hand at birth illustrates these potentials for healing when focusing on the brain. 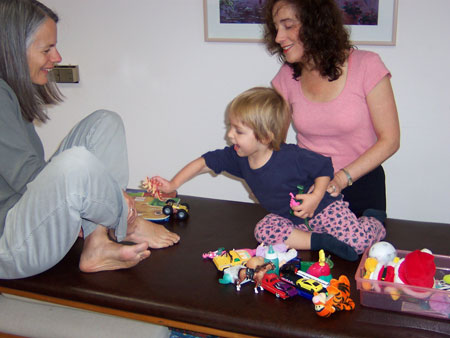 When a child suffers from spasticity, it is easy to think and feel that something is wrong with her muscles and look to bring about change through manipulation of the joints and the musculature in the affected area(s). Methods that use this approach include range-of-motion and stretching exercises, braces, surgery, and Botox. All these interventions certainly have an impact on the child.

However, when we understand that the brain controls all movement and it first needs to map the arm through a wide range of random and eventually voluntary and highly-varied movements, we realize that the only way to bring about maximum recovery -- and oftentimes any real recovery of function at all -- is by performing the intervention in such a way that it will provide meaningful and useful information to the brain.

Before beginning our work, Grace received a variety of therapies and daily range-of-motion exercises, with little progress. Her mother was told, in no uncertain terms, that when Grace turned 4, she would need a highly-involved surgery that would hopefully help her to be able to use her arm.

As in other approaches, we, too, touch and move the child, but we do not do so in an attempt to directly bring change to a specific joint or muscle group. With the Anat Baniel Method, we use movement and touch as a language, as a way to communicate with the brain of the child. We know that the brain is a highly complex, self-organizing system that, over time, forms and creates patterns that control movement. We look to provide the child with experiences (information) that will allow the brain to recognize the existence of the arm and bring about the desired changes spontaneously.

One way in which we provide meaningful information for the child's brain is through the understanding that the body works as a dynamic whole. The arm does not move in isolation, but is a part of the organization of the whole body.

When a healthy child lifts her arm to the front and above her head, for example, we can observe movement in the shoulder, the head, the spine, the ribs, the lower back (it arches), the chest (it lifts), the hip joints, the knees, and the feet. The whole body has to organize itself to ensure not only successful lifting of the arm, but also maintaining of balance, orienting in space and maintaining the continuity of movement.

In Grace's case, due to the substantial reduction in the communication between her right arm and her brain due to the overall limitation in movement in that arm, her ability to learn to move that arm -- and the rest of her body in relation to it -- was greatly diminished. Only a rudimentary image of that arm could form in her brain. When Grace's arm was lifted and moved about during range-of-motion and stretching exercises, her brain had little recognition of that arm and got little new information to work with; hence there was little progress, and the existing patterns of limitation of her arm got more deeply grooved in.

The first time I worked with Grace I had her in her mother's lap, nursing. That provided her with the feeling of safety and gave me easy access to her back. I began by touching her spine and felt that she was able to easily move it to the left in the direction of her fully functioning arm. When I attempted to move the spine to the right, it was rigid. Her head tilted easily to the left since she was able to lean on the left hand, but could not tilt it to the right. Her right knee tilted easily to the left with the right hip lifting as in side-sitting, but her left knee would not tilt to the right, preventing her from falling, as she was unable to lean on the right hand.

In other words, Grace's brain had actively organized her whole body to NOT use or rely on her right arm. This understanding provides us with a remarkable opportunity for transformation. Watch the video showing our work with Grace and her progress.

Instead of focusing on Grace's paralyzed right arm, I turned my and Grace's brain's attention to the healthy parts of her body that could readily learn to move "as if" her right arm was fully functioning. I began very gently moving her spine, ribs, pelvis, legs and head in directions and ways she had never moved them before due to the injury to her right arm.

Fifteen minutes into the first lesson, Grace spontaneously lifted and extended her right arm forward at shoulder height. Later that day, at home, without prompting, she continued to move her right arm, lifting, leaning and supporting herself with it. She also began walking from room to room and standing on her own for the first time. By the third lesson, Grace initiated putting a bead necklace over her head using both hands.

As the lessons progressed, we continued to use "Movement with Attention and the Nine Essentials of the Anat Baniel Method." A year after we began working with Grace, her right hand has become the dominant one, and most of the time it is hard to tell the difference between the two arms, hands, and fingers. Grace's right hand and arm are now an integrated part of her image of self, enabling her to move fully and in ways not previously possible for her.

Read excerpts from a letter written by Grace's mother to a physician.

View a video of another child, an 8-week-old girl with brachial plexus, on our YouTube Channel.

Anat Baniel, Founder of the Anat Baniel Method® and NeuroMovement®