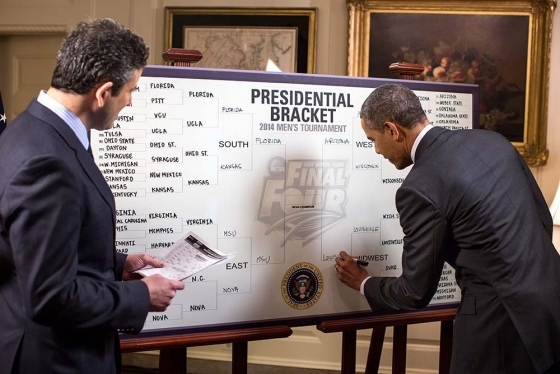 Unless you've been taking a media fast for the last two weeks, you have been awash with stories about college. College basketball is on screens everywhere and the media world is blowing up with debates, cross-promotions, vines and interactive websites related to the NCAA basketball tournaments. From the presidential office, from where ESPN broadcasts Obama's "Barak-etology" picks, to the office pool, American culture is in the throws of March Madness.

This deluge of sports chatter is not incidental. It is driven by a billion dollars in advertising revenue flowing to and from media companies and corporate interests looking to profit from the exploits of students. Churning beneath it all -- even under the debate about whether to compensate "student-athletes" or treat them as a different category -- is a struggle to define the meaning and function of college in our society. Commercial culture tends to push the idea that college is an endless pleasure dome awash in Bud Light, an intense time between childhood and "the rest of your life" -- a kind of temporary March Madness before reality finally kicks in. Go ahead and consume, the commercials (and Dick Vitale) tell us, "it's the time of your life, baby!" Just as engagement with college basketball has different rules during March Madness (as employers know all too well), college life is considered a time of life "bracketed off" and treated differently from the rest of life.

Bracketology is a frame, a clustered conceptual metaphor that, as George Lakoff argues, shapes how we think. It fosters a "kids-will-be-kids" view of college life that brackets-off college from the "real world." While it might seem harmless, bracketology has the unfortunate effect of diminishing the importance of higher education in society.

Bracketology has many uses. It can be used to diminish the importance of student political action. Columnist A. Barton Hinkle employed it last week when he chided liberal UC Irvine students in the Richmond Times-Dispatch for acting like "trigger-happy" censors when they spoke out against racist and sexist speech that made them feel unsafe. Confusing feelings and rights, they ended up "producing demands for conformity." According to logic of bracketology, however, they should be forgiven: "One of the truly delightful things about college is that it allows earnest young people to try out all sorts of ridiculous ideas without causing much lasting harm. After graduation, most will grow up and learn how to laugh at their prior selves. (The rest will become professors.)" Though the dig against ivory-tower professors cheapens the point about freedom of speech in relation to "safe spaces," it is crucial because one of the functions of bracketology is to cordon-off the importance of what happens at college from everyday social life.

Bracketology can also be used to defend student behavior. It was used this way by defense attorney Stephen Jones after SAE brothers down in Oklahoma were caught on camera singing racist songs. "Every 19-year-old male is entitled to five minutes of foolishness," Jones argued. Similarly, bracketology was just used to defend students at Penn State's Kappa Delta Rho who posted dozens of pictures documenting their sexploitive criminality on a Facebook page. "Here's a quick reality check," claimed one defensive student, "everyone -- every Greek organization in the nation does the same old stuff. ... Yeah, it's raunchy stuff, as you would expect from a bunch of college-aged guys." Following the bracket-logic, anything that happens at college should stay at college and be explained away as normal college madness.

There are a number of reasons to resist the dominance of bracketology. Beyond being strangely dissociative, it ends up detracting from the seriousness of college experience and diminishing the importance of higher education in society and life. Instead of bracketing-off discussions about what should go on at college from the "real world," we should emphasize that the conversations about good or bad student behavior play a crucial role in our ongoing ethical education. They train us to be more responsive citizens who share the common goal of a better society. Instead of bracketing off college experience as foolishness, we should take what happens at college more seriously: we should condemn those who act stupidly, and we should aspire to the better world that students imagine as part of a higher education aimed at the public good.

That self-serving students would employ bracketology is no surprise, as this ready-made frame is the dominant one through which American culture views college life. It is unconsciously used by journalists, pundits and politicians in sports broadcasts, beer commercials, TV shows and films. Bracketology is durable because of its feedback effect: art imitates life which then returns the favor. Yet, what other interests in our culture are served by unthinking bracketology? Who else benefits by bracketing-off what goes on at college from the "real world"?

It's a complex question, but one answer would be those whose interests are threatened by the idea of a vibrant higher education system training a critical citizenry. These powerful interests are better served when colleges merely train workers and consumers, the kind you see throughout the March Madness spectacle on TV. They win when higher education in our society functions as a holding tank that contains and cordons-off the criticism of intellectuals and the idealism of youth, both of which have a potentially destabilizing effect on the economic status quo. Bracketology allows college to serve as a safety valve, discharging the energy and hope of a potentially volatile segment of society -- disaffected students drunk with virtue and idealism, and/or sports and beer -- just long enough to saddle them with enough debt burden to discipline the rest of their "real life." But when bracketology wins, the rest of society loses for the same reason it's foolhardy to bracket off the bad behavior of racist and sexist students and not hold them accountable: higher education should play an important and integral role in society and life, and neither is served when they are kept separate. Bracketology, in all its forms, should not be allowed to diminish the importance of higher education and get in the way of our capacity for lifelong learning. So get to work busting those brackets.