A Texas dog who saved his owner's life after a car crash is now missing.

Roman, a 7-month-old terrier mix, was riding in a truck on July 30 along Texas' I-45 and Exit 152 with his owner, Brad Montgomery. Montgomery, a grad student at Sam Houston State University, lost control of the vehicle when his "tire blew and spun me around," he told KBTX.

The truck flipped over three times, tossing Roman out of the open window, the Madisonville Meteor reported. As Roman fell out of the truck, Montgomery reached out in an attempt to grab him, and family members say that action was what saved his life.

"The truck roof was almost in the driver's seat ... And he had leaned over, reaching for the dog ... had he not, he may not have been here today," his sister, Sharil Griesmer, told the Meteor. 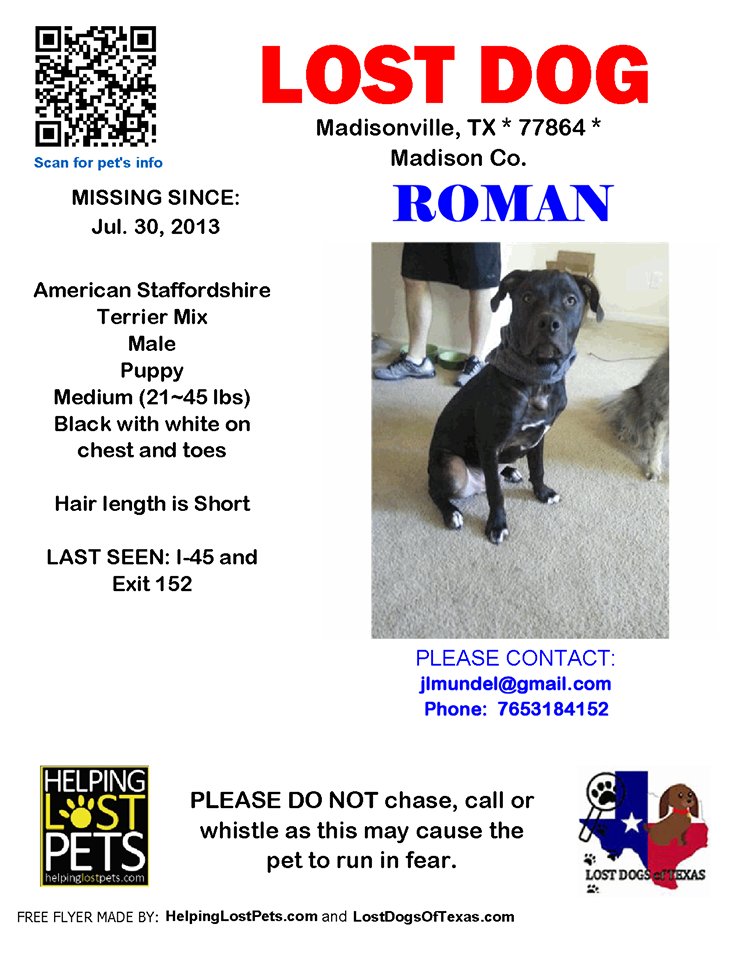 Now, Roman is missing. He ran off after the accident.

Montgomery's girlfriend, Josie Mundell, was driving in another vehicle just in front of him and witnessed the accident in her rearview mirror.

After the accident, an injured Montgomery kept telling Mundell to find Roman. Mundell said she spotted the dog in a cornfield, but he ran away.

Montgomery and Mundell are natives of Indiana and were traveling to Texas so Montgomery could attend grad school. Montgomery lost all of his belongings in the crash, according to a Madison County Sheriff's Office release. He also suffered a fractured vertebrae and had to have 17 stitches as a result of the crash.

Roman is black with white fur on his chest and toes. He is shorthaired, weighs between 21 and 45 pounds, is neutered, has a microchip and was wearing a black leash when he was last seen.