Seated in a big leather armchair with popcorn and a Stella Artois beer on a Friday night in Los Angeles, Brad Pitt was ready to talk about drugs.

Minutes before, in a small theater downstairs, Pitt introduced director Eugene Jarecki's documentary "The House I Live In" about the war on drugs with this confession:

My drug days are long since passed but it's certainly true that I could probably land in any city in any state and get you whatever you wanted. I could find anything you were looking for. Give me 24 hours or so. And yet we still support this charade called the drug war. We have spent a trillion dollars. It's lasted for over 40 years. A lot of people have lost their lives for it. And yet we still talk about it like it's this success.

"The House I Live In" is a harrowing and comprehensive look at what President Richard Nixon coined "the war on drug abuse" in 1972. The film looks at how things have exploded since then, how we ever got there in the first place, and what the hell it all really means. Jarecki's personal ties to the subject matter make "The House I Live In" that much more salient.

Pitt, an executive producer on the film, is no stranger to speaking out for the legalization of drugs. When Jarecki introduced the project to him years before, he told Pitt that he felt the war on drugs "is possibly a barrier to keep the impoverished down. To keep them shackled," Pitt explains. "And I thought well that may be even too liberal for me [laughs], but we just came off of Hurricane Katrina. We had just witnessed that there was a particular portion of our society that was being ignored and that this could be the case."

The Huffington Post sat down with Pitt and Jarecki on Friday evening to talk about the film and America's war on drugs. Here are some highlights from the conversation:

HuffPost: Why do you think the drug war isn't being talked about in this election? Or talked about much at all amongst politicians?
Brad Pitt: It’s been this taboo subject forever -– unless you're claiming victory for a bust or a win. It's absolutely taboo to talk about it as a failure. Which it is. It's an incredible failure.

Eugene Jarecki: If it was any other federal program, it would be looked at as a ridiculous federal waste. It's only because it's law-enforcement-tough-on-crime, it has that sort of veneer, that no one says this is a gigantic federal invasive program that is a huge waste of money.

Pitt: If we spent a fraction of that on education ...

What do you wish you were hearing people talk about right now?
Pitt: Certainly that it's a backwards strategy that perpetuates itself. But also Eugene came at it in a way that I had never thought about before. That the drug war is actually being used to hold a portion of our society down. It's staggering to me what is being perpetrated in this name of a war on ... immorality. It's criminal in itself. And we've got to look at that. We have to change that.

Do you think there's a parallel from another generation for what we now consider the war on drugs?
Jarecki: Prohibition. Look, we did this with Prohibition. It blew up on our face, turned into the mad criminal justice disaster that it became and we quickly scrambled, corrected ourselves and said, "That was a crazy idea."

Why aren't we doing that now?
Jarecki: The difference between then and now is we have built an entire industrial sector in this country that has come to rely, in the most unholy way you could imagine, on a steady flow of human beings to sustain itself.

Pitt: You're talking about the penal system, yeah?

Jarecki: Yes. The prison industrial complex, to put it in its crassest term, is a system of industrial mass incarceration. So there's what you call bureaucratic thrust behind it. It's hard to shut off because politicians rely upon the steady flow of jobs to their district that the prison system and its related industries promise.

You have a joint venture there that is blocking reform. And that makes reform even taboo to talk about. Because everybody in Washington is subtly getting a piece of the action. On both sides of the aisle. Look, there were people profiting from slavery too. And then we stopped it. It took a long time ...

How did we get here?
Jarecki: A serious drug dealer is a predator in a way. Well, we all want to protect each other from predators. But people who are hurting themselves with a drug on a porch because they're poor, they don’t have a job and they're marginalized in this society -– I have friends who have lots more comfort than that who take Prozac. So why are those other people specially singled out that they're not allowed to self-medicate?

Pitt: The only way to end the war on drugs is to take the profit out of it. I know this comes with a whole other host of problems and I don't know if I'm actually presenting it as a reality, but we have to look at the what-if-everything-was-legal and people were allowed to make their own choices. And we were treating it less as a criminal issue and more as a sickness. People do drugs to escape. We're not talking about experimentation. People with long-term drug use are escaping.

Jarecki: There's a journalist in the film named Chuck Bowden, the guy with the really deep voice who sounds like he's been drinking whiskey all day. Chuck has a deep knowledge of the drug war, particularly with how it's impacted Mexico. He said something very interesting to me about decriminalization. He said, you know people think that when you decriminalize, you'll drop the price and they tell you two lies about that. The first lie is that if you decriminalize, people will use drugs less. Because they were really using it because it was forbidden. Well that's a bunch of bull. That didn’t happen in Prohibition, in fact, use went up a little bit.

The second lie is that if you drop the price by decriminalizing, the violence will go down. Say in Mexico. He said that’s also a lie. Because the people that are living off of the drug war using violence right now, they are people who use guns to make their living. And right now drugs are the substrate. Take the drugs away, they still need to make their living and they still have the gun. So what happens is the violence will simply migrate. It will shift over to carjackings, kidnappings. And I said yikes! And he said no, that’s a good thing.

Why is that?
Jarecki: Because now the violent concentrate themselves where we know who is violent. Right now we've got them all pooled together with the poor and the nonviolent and the people who are just in pain and self-medicating, and we are indiscriminately jailing them all. So he said decriminalization will actually put law enforcement back in the position of knowing the difference between a threat to the community and somebody who isn't.

Pitt: And there's another issue. You can control quality. The quality of drugs is higher than it's ever been, but it’s still all over the map. If you decriminalize, then they could control the quality.

Jarecki: If you decriminalize it, then the government can get involved in it the way they do with a controlled substance.

Pitt: And I would propose you would have fewer deaths.

"The House I Live In" opened in select theaters on October 5 and in Los Angeles on October 12. Other Hollywood muscle behind the film includes executive producers Danny Glover, John Legend and Russell Simmons. 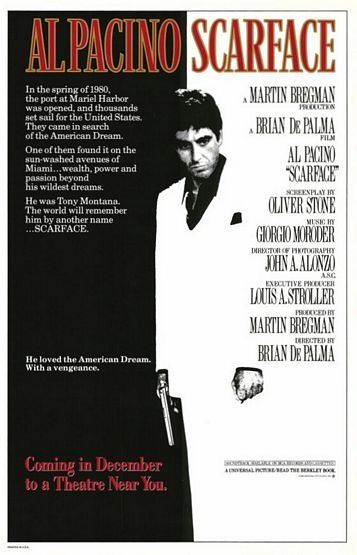 1 / 10
'Scarface'
<strong>Action Flick</strong> The 1983 film that turned "say hello to my little friend" into a household catchphrase shied away from making many political statements. It did, however, draw the ire of many Cuban Americans, who found the film's portrayal of their kinfolk thuggish and demeaning. All in all, the violence was treated mostly as a spectacle, much to the chagrin of many critics who reviewed the movie at the time of its release. The message: Say hello to my little friend.
Alamy