Bradley Manning has been on my mind a lot lately, but not intentionally. His face is painted as a mural on the wall of a brick building next to a deli in my neighborhood in Greenpoint, Brooklyn. It's graffiti, and I see it every day because it's located along the bus route I take home after picking up my kid from his after-school program. Manning's face glows a ghostly white through the wintry gloom, a spectral reminder of him and the controversy he's stirred.

During daylight hours you can see the mural more clearly; above Manning's smiling face is the most daring word anybody could have tagged in association with him: HERO.

The mural is simple and carelessly done, but it always holds the power to jar me out of my post-work stupor. The most jarring thing about it is that it exists at all. As the soldier who is in prison for allegedly leaking classified material to Wikileaks, Manning is controversial, which makes any public art about him, in this society at least, almost proportionally controversial. Politically charged art that's left out in public tends not to last long. Eventually someone comes along and complains about it and rouses a genuine neighborhood outcry, or someone else becomes livid and permanently defaces it, or someone else calls the media, and the ensuing outcry, whether manufactured or real, causes the owner of the art to reluctantly have it removed to avoid all the hassle. End of story.

Not so here. I never hear my neighbors discuss it, and the media hasn't noticed the mural -- search queries in the major New York papers yield nothing. Some have posted photos of it on Twitter, but it never went viral. Someone did once scrawl the word "traitor" across Manning's chest, but that was cleaned off, and in short order the mural was restored to its original state. 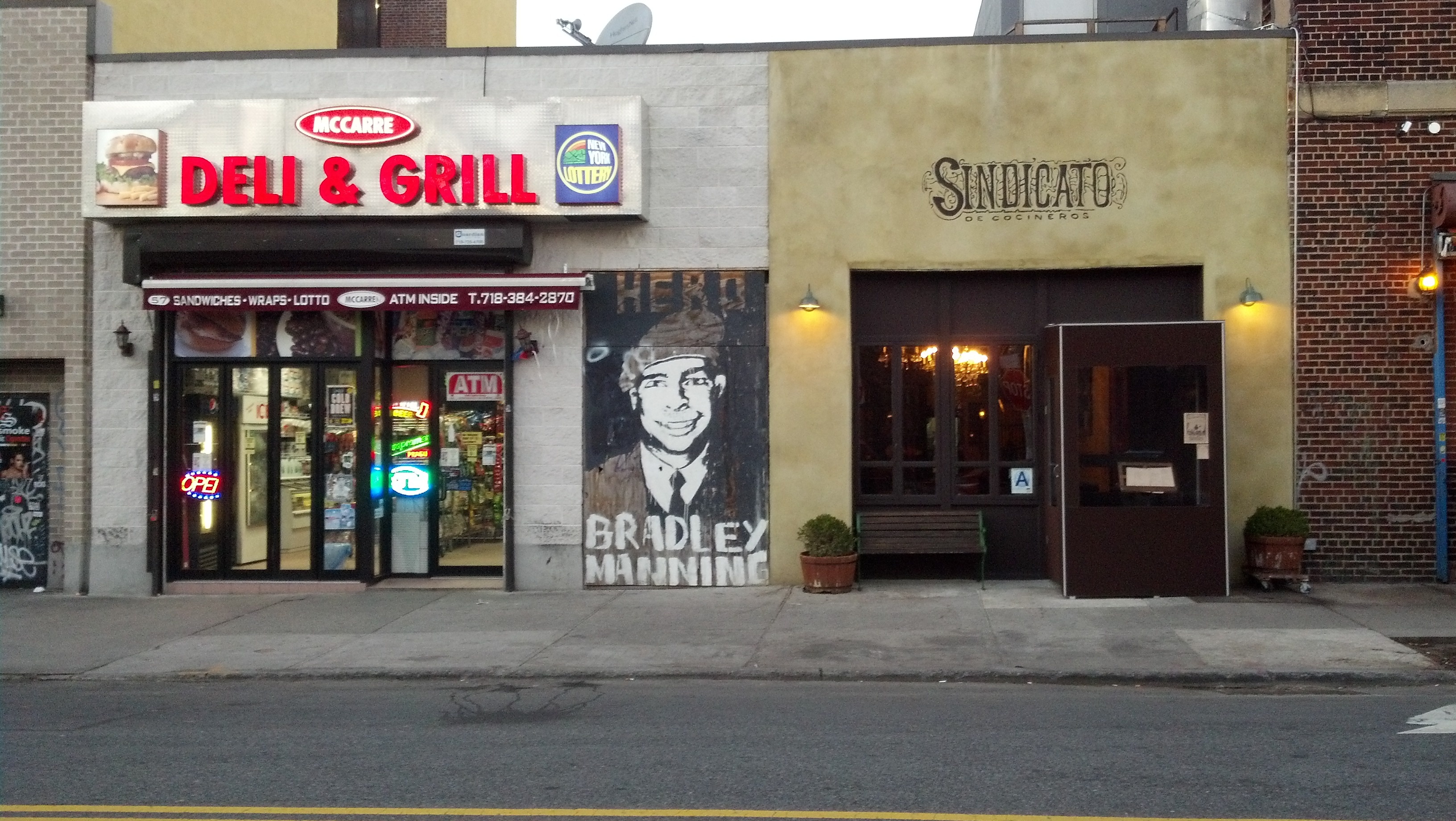 "Hero." Is Bradley Manning a hero? I don't know. I haven't made up my mind yet. And, strange as it sounds, when I started thinking about Manning on those bus rides, I realized that I wasn't interested in my own opinion. I wanted to see what other people were saying. It's a very odd thing, to see a hero on the wall of a building, but to know that that "hero" is in a prison kept by one's own government. How did others feel, and how were they expressing their feelings?

I started poking around on the Internet. One thing I learned: The '60s are dead, man, dead. "Almost Gone (The Ballad of Bradley Manning)" as played by Crosby, Stills, and Nash has gotten fewer than 4,000 view on YouTube. Four thousand views is what Beyoncé would have gotten in the time it took you to read this far.

The '60s are dead, but Bradley Manning's problems have gone on long enough to warrant an old-school street protest. After almost 1,000 days in prison, his trial still doesn't start until June. To quote Thomas Andrews Drake in Politico: "For nine months, Bradley was held isolated in a 6-by-8 cell, and allowed only 20 minutes of sunlight and exercise per day, in violation of Navy instructions and also... in violation of military law. The U.N. Chief Rapporteur on Torture called these conditions 'cruel, inhuman and degrading,' and any reasonable person would see them as torture."

Instead of earnest folk songs, we get "I Am Bradley Manning," a popular lefty website in which people from around the world can express their support for the accused American soldier by posting photos of themselves holding up little signs of various shapes, colors, and materials saying, "I am Bradley Manning." I couldn't say how many people have actually posted photos of themselves there; I scrolled for several minutes, and couldn't find an end, and so gave up.

But the website confused me. No, I retract. The website nauseated me. It actually doesn't answer the question, "Is he a hero?" Nor does it invite additional intellectual discussion on the crucial issues Manning's case raises -- it instead takes pictures of us and tries to turn us into heroes for... for what?

Did these people really have to write, "I am Bradley Manning"? Wasn't it enough to say, "I support Bradley Manning"? Wave your hand dismissively, but this isn't a minor semantic point. The fact is, there is only one Bradley Manning, and that is Bradley Manning, who has been in prison awaiting his trial for almost two years, at times under inhuman conditions, whereas these supporters are merely acting out a public fantasy in which they declare that, given the chance, they too would have the boundless temerity to steal and help make public troves of classified data from the most powerful military on the planet. (OK, there are two Bradley Mannings, but the other Manning is Daniel Ellsberg, and you are neither).

Give me a tired Woody Guthrie song any day. Flip the political ideology of these same people, and they would be survivalists who pose on Facebook with automatic weapons to "taunt" the government to try to take their guns away. And some of the "I am Bradley Manning" participants aren't even showing their faces, preferring to coyly hide behind a Guy Fawkes mask. Really -- such courage.

Compare the simple, lesser-known "HERO" mural in my neighborhood to the solipsistic silliness of this website, and there's no question that the mural does more with less. The mural does exactly what the tagger, an artist named Bamn, intended: "My only intention is to spark dialogue," he told a hyper-local website called Greenpointers. Well, I've already said that nobody in my neighborhood is talking about the mural, but then again I do not know everyone in my neighborhood. What I mean to say is that Bamn's mural has forced an internal dialogue with myself, and I suspect with many more people who've come across it.

Also, arguably, if no one's trying to take the mural down, if the one attempt to deface the mural was easily repelled, then it's quite possible that there is a wide, silent support out there for what Manning has (allegedly) done.

Bradley Manning: Hero, traitor, or neither?

The problem with all of it, of course, is over-simplification. Manning's case raises too many questions that most political art cannot answer. That's why I'm looking forward to seeing the more oblique, complicated art of Lance Wakeling, an artist who lives, as it happens, not too far from me and the Manning mural in Brooklyn (did Bamn's simple mural get him thinking, too?).

Wakeling's video project on Manning, which was just launched as a proposal on Kickstarter, is the third video in a trilogy about the ways the Internet meets the physical world. In the first video, "A Tour of the AC-1 Transatlantic Submarine Cable," Wakeling literally followed, for thousands of miles, a telecom cable loop that connects the U.S., the UK, the Netherlands, and Germany, providing, along the way, the kind of historical, political, and cultural digressions reminiscent of the author W.G. Sebald.

In the second video, "Views of a Former Verizon Building," Wakeling stayed in one place, but focused his video camera and his discursive ideas on a massive, privately owned data center in Manhattan.

For this video, "Field Visits for Bradley Manning," Wakeling proposes to travel to all the places where Manning has been detained: Kuwait, Virginia, Kansas, and Maryland. Along the way he will be discussing a wide range of ideas that directly and indirectly affect the Manning case, from Buffalo Soldiers to the history of fingerprinting prisoners.

Bradley Manning, who says he acted from the soul-felt, utopian need to set information free, is now confined to a small prison cell. Wakeling explores these and other contradictions. "Manning interests me because he is both a cause and a result of the government crackdown on free information," Wakeling told me in an email. "As I continue to explore the Internet off-screen, I am surprised to see so many prisons and barbed wire."

So much Internet, but also so many prisons, and so much barbed wire. Places where you and I go in this free society of ours, and places you and I most certainly are not allowed to go. I hope Wakeling gets the funding he needs, because I can't wait to see what he finds out. Because while it's OK for a work of art to rouse me from my daydreaming on the bus with an abrasive question, ultimately the Manning case needs deeper thinking. These simplistic questions have, unfortunately, deeper and more complicated answers.