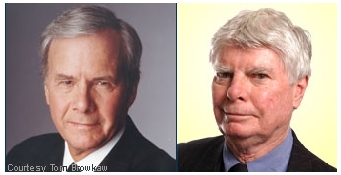 Let me get this straight: James Brady's latest Forbes column is about the acknowledgments section of Tom Brokaw's new book. Not the book, which is 611 pages — no, that would be too much to read! Instead, Brady read the 3 pages where Brokaw — like any author but particularly a non-fiction author putting together what is essentially a huge historical reference book — thanks those who have assisted him in bringing the project to fruition. BUT - that's not the part that makes the steam blast out of my ears. No, Brady's point — and he does have one! — is the fact that Brokaw thanks people for help in research and fact-checking and advice and assistance — which must mean that he didn't write the book himself. Quoth Brady:

Listen to what he says about the work of authoring in an acknowledgment at the end of Boom--his gracious thanks to those on "Team Brokaw" who helped him write the book: "I had at the ready the best team any author could want. Liz Bowyer, the captain of the team, a tireless and persuasive interviewer; Frank Gannon, suggestions, observations, contributions, encyclopedic knowledge of the '60s; Michael Hill, fact-checker extraordinaire; Meaghan Rudy [sic], now part of the NBC family; and John Balz, who tracked down players, facts, trends and under-reported consequences of the '60s."

Never mind the other members of "Team Brokaw" that Brady finds to be such an outrage: Random House execs and staffers, publicists, the book jacket designer, the lawyer, people who helped him at NBC, his assistant, production people, and his family. HOW DARE HE! Then Brady, that master researcher, goes back to Brokaw's The Greatest Generation and finds that he had the temerity to thank all the people who helped him then, too. THAT CHARLATAN! OF ALL THE NERVE!

But the one with nerve here is Brady. Here's what he wonders, without a whit of examination: "But what with all these people setting up and sometimes doing the interviews, coming up with ideas, doing research, offering thoughts and checking facts, contributing stories, to say nothing of the gophers. Is he truly writing great non-fiction, or practicing a brilliantly effective sort of Henry Luce-group journalism?"

Here's what I wonder: WHY DOES JAMES BRADY HAVE A COLUMN? AND DOES HE EVEN HAVE AN EDITOR?

I'm sorry. It's just that, unlike James Brady, I have actually read something in "Boom!" other than the acknowledgments. In fact, I've read a whole lot of it, since I interviewed Brokaw about it just yesterday (plug!) and wanted to make sure I was, you know, prepared. Or had least done SOME form of research — unlike Brady, who notes that Brokaw's History Channel special based on the book will be "aired any day now." In fact, it's being aired on SUNDAY. Which you can find out by just asking GOOGLE. That sound you hear is me BASHING MY HEAD AGAINST THE WALL.

That's not the only glaring error in there — TVNewser already noticed that Brady couldn't even transcribe a paragraph from the acknowledgments correctly — but never mind not reading the book, Brady couldn't even have been bothered to CALL ANYONE FOR COMMENT. He's basically alleging that Brokaw didn't write his book, or is misrepresenting himself as the sole author — a pretty humongous and heinous allegation for any journalist, let alone one of his caliber whose name and reputation are anchored (ha) in his credibility, accountability and transparency. You'd think he would — at minimum — pick up the phone.

Or, at least, the book — since he had it. His first clue might have been the title: Boom! Voices of the Sixties: Personal Reflections on the Sixties and Today. Yes. THE TITLE. If he'd gone that extra mile and opened it to the first page, he would have immediately started reading a story only Brokaw could tell: The account of his courtship and marriage to his wife, Meredith, in 1962, and his subsequent professional journey set against the backdrop of the unfolding 60s, starting in Omaha (where he almost punched out a co-worker over JFK's death) to Atlanta (where he covered the civil rights movement) to Los Angeles (where he covered Vietnam) and 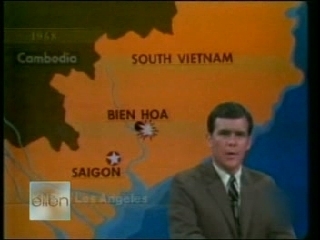 onward. That's not an NBC factchecker in that old-school screengrab to the right — it's Brokaw, who has said time and again that he wrote the book through the lens of having seen it firsthand. As a reader, that is the impression that you get. You also get the impression that he actually interviewed the people he says he did, because he says things like "When I asked President Clinton about..." and "When we met in her Senate office, I turn the question around" and "When I ask if he ever goes to reunions with buddies from his old outfit, he says..." From the table of contents, it looks like Brokaw interviewed over 80 people for this book. But, clearly Brady didn't even read that.

He doesn't even attempt to answer his own questions: "Just how much help [are you] allowed to have in putting your own name on the title page of a serious book?" All he does is imply darkly that Brokaw, with his vast shadowy army of helpers, went over the line. It's the classic putting-the-statement-in-question-form: "But has Brokaw earned his best-seller status, or is he simply smarter and better-organized and with better sources than the rest of us?" I dunno, maybe — I wonder what those random Random House employees and NBC staffers recall about traveling through Vietnam with Senator Jim Webb in January 2006 (p. 163) or about his introduction to the heady, free-lovin' vibe of Haight-Ashbury ("A young girl, no more than sixteen, approached and asked if I wanted to buy some hash...she added proudly, 'I've slept with all the Byrds.'" - p. 243) or about that time in Americus, Georgia when the sheriff trained his shotgun on him for daring to try to cover a school segregation story (p. 45-46) or that almost-orgy on pg. 19 (fine, Meredith wanted to leave, Tom, but did you?). I guess those details are easy to come by when you have so many helpers around!

Reading an error-riddled, journalistically-bankrupt hit piece like this makes it hard to remember that Brady is an acclaimed author in his own right, having written his own definitive book on the Korean War, The Coldest War: A Memoir of Korea , which I haven't read but Amazon tells me has 256 pages. Hmm, I wonder if he wrote ALL those pages himself? The index is six pages long (thank you, Amazon reader), and the very second entry is for someone named Mack Allen, who appears on a whole bunch of listed pages. There's also a Jan Sterling and a John Chafee, a Major Nicholson, Seargeants Dils and Dodge, plus Bob Hope and Jimmy Cagney. That's a lot of people on a lot of pages — surely Brady isn't taking credit for coming up with their stories? This could not be a more ridiculous line of reasoning for me to take — how on earth could I ever tell without reading through the book? It's a de minimis standard, and one that Brady himself utterly fails to meet.

I've said it before but I'll say it again: It drives me NUTS when people airily brush off the work of the blogosphere and extol the virtues of "real" journalists in print, and then a top-tier magazine like Forbes goes ahead and publishes this tripe. From top to bottom it's an affront to journalism, never mind to this particular journalist: It floats nasty, suggestive questions that imply the answer, unproven; it makes assumptions based on conjecture, weakly-sourced; it makes statements that are flat-out wrong — because Brady didn't care and couldn't have been bothered to ask.

It does, however, provide me with a neat opportunity to say this: My interview with Tom Brokaw will run tomorrow. James Brady, check it out!

Related:
Does It Count As Disclosure If No One Ever Reads A James Brady Column All The Way Through? [ETP]

Er, transcribing takes time. Not tomorrow, but it'll be up soon!

mediaEat The Press
Go To Homepage