André Ford, an architecture student from the U.K., wants to bring new meaning to the phrase "like a chicken with its head cut off."

He proposed his 'Headless Chicken Solution" for a project at the Royal College of Art in which he was asked to look for sustainable solutions to the U.K.'s farming inefficiencies.

Currently, the U.K.'s factory farms utilize a "broiler" method to kill 800 million chickens each year for meat. The method is also popular in the U.S. where, according to PETA, 7 billion chickens are raised and killed for food annually.

These chickens are typically raised in overcrowded, dark rooms. After they've grown for a few weeks, they go through a process in which an automated machines cuts their throats before dipping them in scalding water to remove feathers. But the method is imperfect, and some chickens are still conscious when dipped, while some of them miss the throat-cutter entirely.

Ford's idea is to spare chickens pain and suffering while maximizing space and production capability at the same time.

The science is simple: remove the chicken's cerebral cortex and thus remove its sense perception.

Speaking with the blog We Make Money Not Art, Ford further outlined the science behind the idea:

As long as their brain stem is in tact, the homeostatic functions of the chicken will continue to operate. By removing the cerebral cortex of the chicken, its sense perceptions are removed. It can be produced in a denser condition while remaining alive, and oblivious.

Ford told The Huffington Post that the inspiration for his idea came from his research, which pointed to two major issues.

"The livestock industries are responsible for 18% of all greenhouse gas emissions," Ford said in an e-mail. "This is worrying because the demand for meat is increasing worldwide and is set to double by 2050. 40% of this increase predicted to be in the poultry industry."

Architecturally, the idea would optimize space and production costs compared to current systems. He demonstrated this in his exhibition by building a honeycomb-like vertical wall of prosthetic chickens.

Ford added that he believed "the welfare provided in the existing dominant systems," including free-range farms, is "wholly inadequate."

Though the solution seeks to resolve existing poultry farming issues, it also presents a slew of new ethical dilemmas. But, as Wired notes, the similarity between the idea and the horrifying dystopian future portrayed in "The Matrix" is not lost on Ford.

"The similarities are patent, although in 'The Matrix' the dominant species were kind enough to provide the subspecies with a alternate reality, which was far better than the their ‘real’ post-apocalyptic world,” Ford told Wired.

But Ford insists these ethical dilemmas are inherent to the idea of raising animals for human consumption.

"Current [animal] welfare standards are a farce. 'Free range', for example, is simply a badge that alleviates the consumer from confronting the real problems inherent in eating meat," Ford told HuffPost. "The fact is people want to eat meat, they want to eat it as cheaply as possible, and only if they can afford it."

"Desensitization is my answer," Ford said.

His idea isn't the first attempt to find a better system than factory farming. Earlier this year The Huffington Post's Cara Santa Maria reported on lab-grown "in-vitro" meat that could be available to consumers by the end of the year.

What do you think of Ford's idea?

Check out shots from Ford's exhibition in the slideshow below: 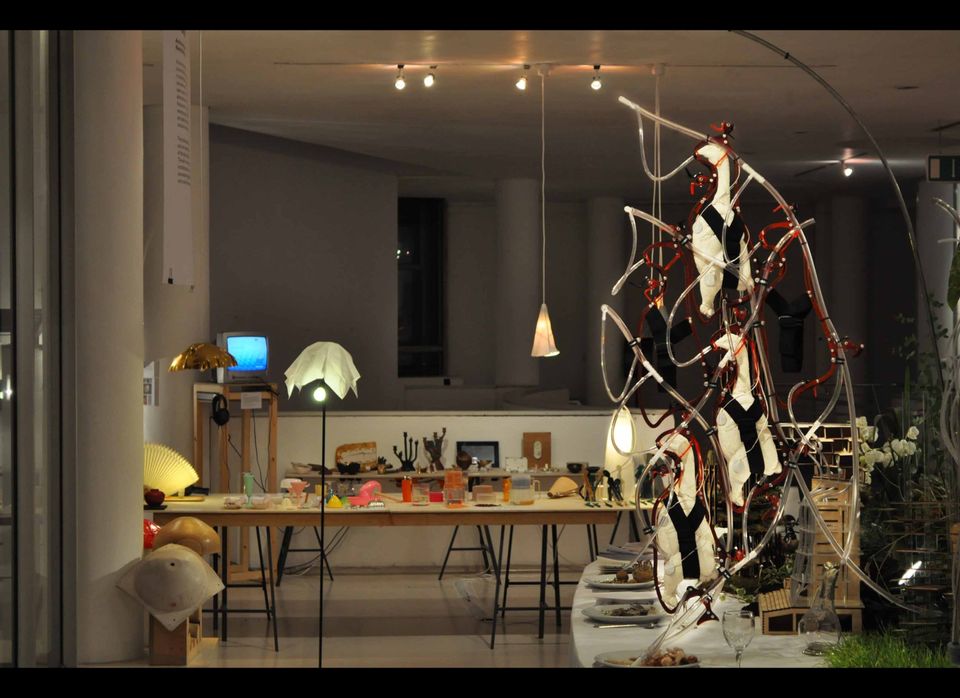 1 / 11
Brainless Chicken Project
Architecture Student André Ford explores the moral dilemma of eating meat with his rather disturbing proposal for a lobotomized chicken factory that makes a startling statement on what the future of farming could look like. Less like raising birds and more akin to growing meat, the project offers a way of resolving the deplorable living conditions of the typical factory farm. Rather than adding more room to breathe though, the idea is to sever the birds' frontal cortex so that they would not be able to sense their environments.
André Ford