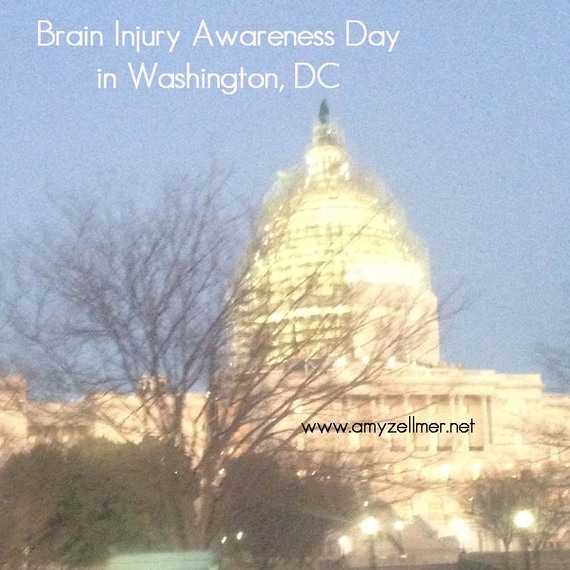 Last month I attended Brain Injury Awareness Day at our national's capitol in Washington, D.C. My journey began in mid-February when my story, "Life With a Traumatic Brain Injury," was published on The Huffington Post. I had finally mustered up the courage to share my story with the world in hopes that maybe, just maybe, one person would read it and be inspired by it, knowing they're not alone in this journey. Or maybe it would help educate even just one person on what Traumatic Brain Injury (TBI) is like.

After the story went live, I received hundreds of emails and Facebook messages from other survivors sharing their stories with me, thanking me for putting into words what they hadn't been able to articulate. They were sharing MY story with family and friends in an effort to help them understand what they feel emotionally and physically while dealing with a TBI.

This led me to create a Facebook group for survivors and caregivers which I affectionately named "The TBI Tribe." In the meantime, my next story, "March is Brain Injury Awareness Month" was published on The Huffington Post, and I mentioned this new group in my article. Within just a few days I had over 300 members in my group, one of which invited me to come out to Washington, D.C. for Brain Injury Awareness Day on Capitol Hill. I was thrilled and honored, but it was less than two weeks away and I just didn't have the funds to go. After some encouragement from several members of the group and a close friend, I decided to try a Go Fund Me campaign to see if I could raise enough money to cover my travel expenses.

What happened next is truly amazing. I am in awe of the generosity and support of so many. Complete strangers were donating to my cause because they wanted me to be their voice at the capitol. They had faith and trust in me to be their voice for TBI awareness and were willing to support me financially. Along with complete strangers, numerous friends also contributed to my campaign and in less than a week I had enough money to purchase my plane ticket and hotel room, as well as cover ground transportation costs and food. I was truly blown away! This tribe of mine truly inspires me in ways that they will never understand.

What the tribe doesn't realize is how much they have helped me heal. They helped me understand that I am not alone in this journey. Knowing that the symptoms and struggles I have been having are "normal" has really helped me move forward. Up until this point I had been scared and confused about my future, now I am confident that great things are quickly approaching and that my healing will only continue to get better. Their words of encouragement and love keep me writing and advocating for awareness.

My day on the Hill was magical and eye opening. I was unaware of so many of the resources that are out there to help us TBI survivors. Paul Bogsworth, a member of my Tribe, was particularly helpful in preparing me for my trip to D.C. He prepped me on me what to bring, and what to say when I met with my senators. 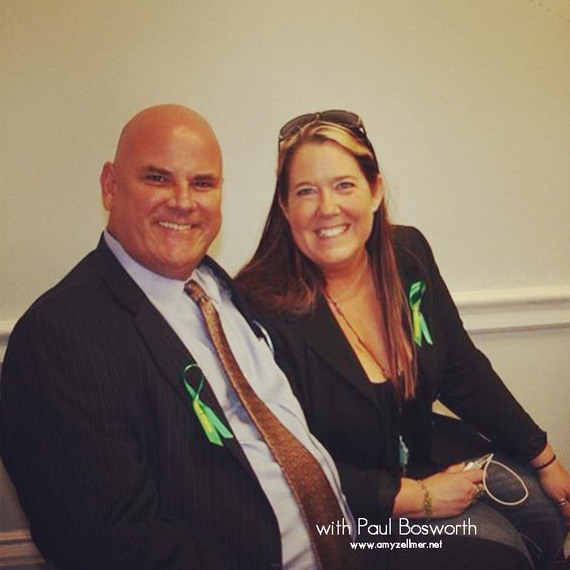 We started off the day by having breakfast with my MN Senator, Al Franken. I had some time to chat with his aid, Erika, and left her a packet of information on brain injury, as well as printouts of my HuffPost blogs. 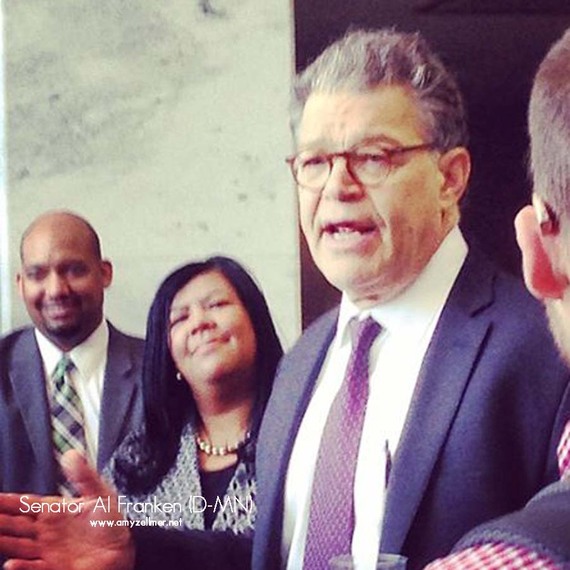 Additionally, I met an amazing group of ladies from MN who were there for colorectal awareness, one of whom has a husband who is a neurologist here in the cities. I believe everything happens for a reason, and our paths were meant to cross. I can't wait to connect with these ladies here in the cities!

After breakfast, I spent several hours in the trade show. I met with about 50 different vendors, spending a lot of time talking with them and telling them my story. It was touching how sincerely they wanted to hear our stories, and many of them had their own TBI story as well. I also had the pleasure to meet a handful of people from my Tribe, including the one who originally invited me and started this whole journey. Additionally, I met Noel and Kelly from Brain Line, who have generously shared all of my HuffPost blogs on their site, including "5 Things Every TBI Survivor Wants You to Understand," which has gone viral. It was such a pleasure to get to meet the faces behind the page! 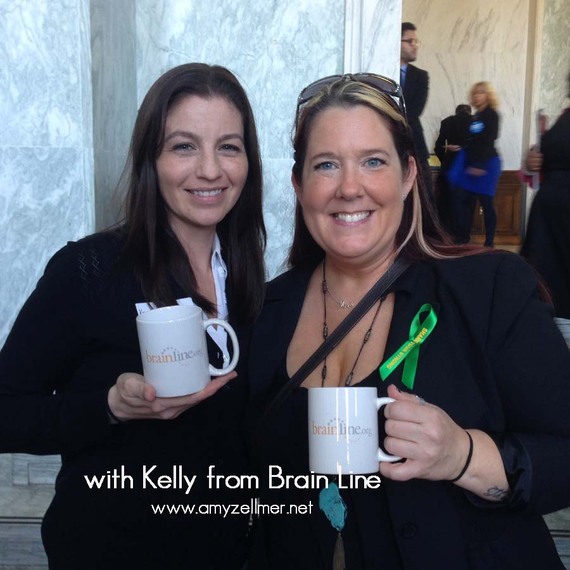 It was then time to head to the official briefing with Congressman Pascrell, Jr. (D) of New Jersey. My favorite quote of his was "every concussion is brain injury!" This is a powerful statement, as so many think a concussion is "no big deal" when in fact every time you get a concussion you are getting some level of brain trauma and injury. We also heard from Mac Fedge, a 13-year survivor, and his mom, Kathy. They focused on the fact that our health care system needs to change and also grasp a better understanding of TBI. Kathy was told that Mac would be a vegetable for the rest of his life, and insurance cut him off after a year or two and stated that he was never going to get better. Let's just say they totally proved them wrong, and while Mac still has his struggles, he can now talk, read, play chess, and give a presentation! 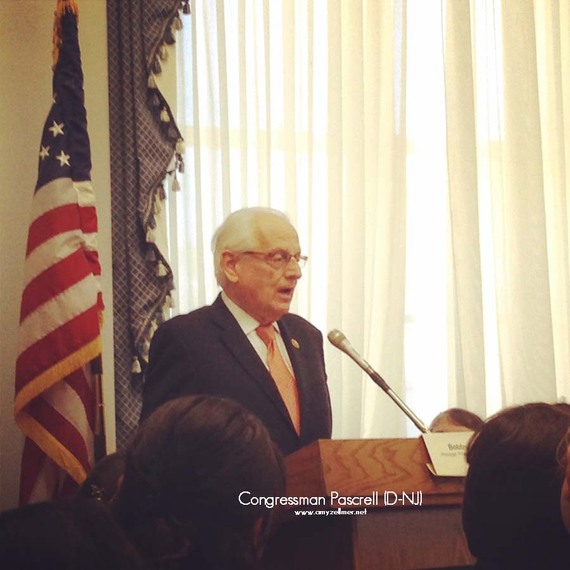 A few of the biggest take-aways for me were: The CDC have finally updated their statistics on TBI after almost 10 years; and the fact that healing of the brain can continue to happen for years. It's a slow process for some people, and there are aspects of us that will never return to the way we were. For us TBI'ers, it is all about "Finding the New Normal!" 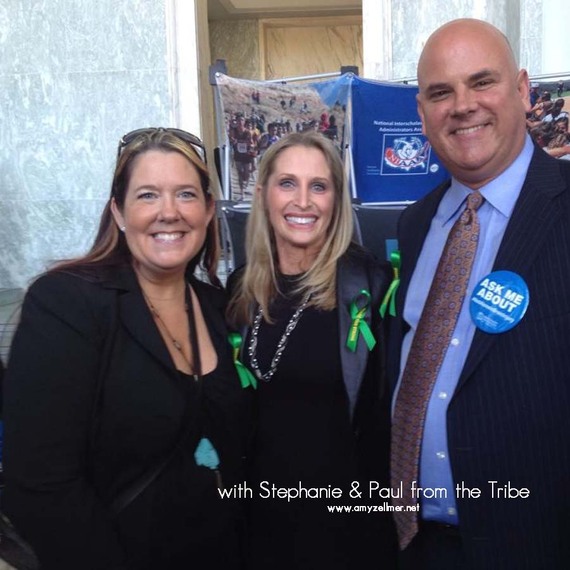 After the amazing lineup of speakers there was a lovely reception for us, after which I had to head to the airport to return home. It was a fantastic experience, and I am forever grateful that my friends and Tribe afforded me this opportunity. I returned home exhausted but energized and inspired. I can't wait for next year!