Neuroscientists are using brain scans to discover the meaning of true love, or at least, what it looks like in the brain -- information that could one day be used in divorce trials or other legal proceedings.

A group of scientists from China and New York used brain scans from 100 people to map out the brain in love -- and the brain falling out of love.

The findings, which were published online in the journal Frontiers in Human Neuroscience last month, revealed that people who were deeply in love and those who had recently broken up with their partner showed differences in a number of brain regions, particularly some that make up the brain's so-called "reward center" and are involved in emotion regulation and feelings of motivation and pleasure.

Here's how falling in (and out) of love affects brain activity.

Falling in love: When a person is in love, there tends to be increased activity in the brain's "reward center," likely because they are experiencing a great deal of pleasure. One area of increased activity was a part of the brain that is active when someone first detects something rewarding (in this case, a love interest) or is expecting a reward (for instance, a special night out with said love interest).

The brain activity of people in love suggests that "they feel more rewarded, are more emotional and attentive, show higher motivation and are more engaged in social interaction," Anna Zilverstand, a post-doctoral fellow at the Icahn School of Medicine at Mount Sinai and a co-author of the study, told The Huffington Post.

Breaking up: After a breakup, activity in the brain's reward center decreases, indicating a drop in pleasure. A particularly sharp decrease in activity and functional connectivity was observed in a part of the reward center associated with the expectation of rewards. 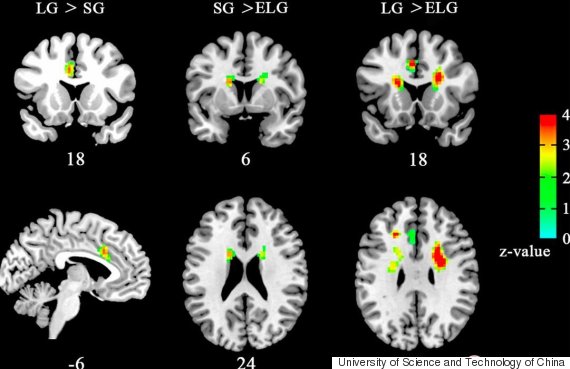 The findings may have important implications for the treatment of mood disorders. If we're able to better understand how positive emotions work in the brain, we might be better equipped to treat negative ones.

"While much of the current research in psychiatry focuses on negative symptoms of psychiatric disorders, we believe that understanding positive emotional states may be crucial for further development of treatment," Zilverstand said. "This research may be relevant for developing treatment for people who have difficulty engaging in social relationships, interventions to alleviate the negative impact of breakup, but also in treatment of psychiatric disorders in general."

With further research, this technology may also one day be used to reveal a person's true emotions -- possibly in a courtroom setting. What if a brain scan could reveal if you've been unfaithful? When it comes to crimes of passion, these brains scans could someday be the new lie detectors.