Activity in certain regions of the brain can predict whether you'll like a new song enough to buy it, whether it's indie rock like Florence + The Machine's "Drumming Song" or experimental electronica like Ratatat's "Neckbrace."

Those are just two songs used in new research that explains how new music rewards the brain. The study found that the more active the nucleus accumbens (a small area deep in the brain), the more likely people are to shell out cash for new music. This willingness is especially strong when the nucleus accumbens interacts with a brain region that stores memories of old music.

The study helps explain how something as fleeting and intangible as a string of musical notes can be so rewarding, said study researcher Valorie Salimpoor, a doctoral student at McGill University in Canada. [Top 10 Mysteries of the Mind]

"It's all happening in your head. You have nothing to show for it," Salimpoor told LiveScience. "But somehow, because we have the cognitive resources to be able to process and appreciate these temporal sound patterns, we can experience really intense emotions from them."

The draw of new music

Music seems a uniquely human phenomenon, and it appears across cultures. In fact, a study published in the journal Proceedings of the National Academy of Sciences in December 2012 found that even across vastly different cultures, people express primal emotions through music in strikingly similar ways.

Music is known to engage emotion-processing regions of the brain, and Salimpoor and her colleagues had previously found that music perceived as pleasurable triggers the release of dopamine in the brain, a neurochemical associated with feelings of reward. Food and sex, which are necessary for survival and reproduction, also trigger dopamine release.

That earlier study, published in the journal Nature Neuroscience, found that people didn't only receive jolts of dopamine at their favorite parts of a song; they got dopamine boosts right before, too. The finding suggested that anticipation is a major part of the pleasure derived from music, but it wasn't clear from where the anticipation was coming.

"Are you anticipating your favorite part because you know it's coming up, or is it the case that you have some general knowledge of music based on all your previous experiences?" Salimpoor said.

To find out, Salimpoor and her colleagues recruited 126 participants and whittled them down to a group of 19 who had very similar tastes in music — they turned out to be lovers of electronica and indie tunes. The researchers used music-recommendation programs to find new songs these participants had never before heard, and then had them listen to those songs for the first time in a functional magnetic resonance imaging machine (fMRI). [Brain Mixtape: List of Songs Used in the Study]

As the participants listened, researchers used the fMRI to track blood flow to various brain regions; this blood flow, in turn, is correlated with activity in those regions. 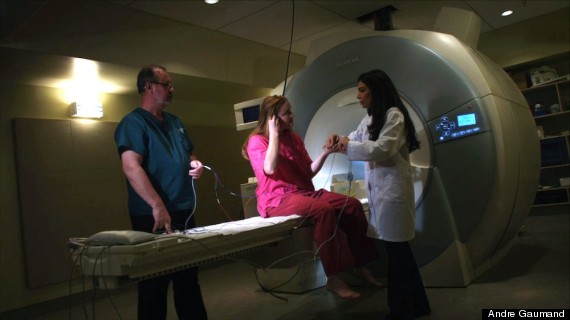 A participant prepares to listen to new music in a functional magnetic resonance imaging (fMRI) machine.

After hearing a song clip, participants could choose to buy the tune with their own money, bidding to spend either 99 cents, $1.29 or $2, depending how much they'd liked it.

The researchers found a strong link between how much a person was willing to spend on a song and the nucleus accumbens, in that a busier nucleus accumbens was related to more willingness to drop some cash. This brain region is known to be associated with reward, particularly forming expectations of reward. 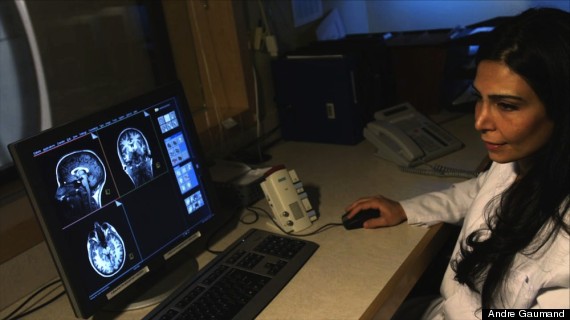 Researchers scanned the brains of participants as they heard new songs for the first time.

"It's really cool, because it's suggesting that as we're listening to new music, we're constantly making predictions," Salimpoor said. "This really links back to our previous study of anticipation and why it would play a role in music."

What's more, as people were willing to spend more money on a song, their nucleus accumbens showed greater co-activity with another brain region called the superior temporal gyrus. This is an auditory region that essentially stores sense memories of music heard in the past. If you've heard a lot of Western music, your superior temporal gyrus will have a different "library" than if you grew up listening to music from East Asia, for example.

The study suggests that when you hear new music, your brain flips through this library, building expectations from templates of music heard before. If those predictions are confirmed or pleasantly subverted, you may find yourself loving the new tune.

"We can look at music as an intellectual reward," Salimpoor said, adding, "It's essentially pattern recognition, and this is something humans are very good at."

Several other brain regions were also linked with finding music rewarding, including the emotion-processing amygdala and two higher-level emotion-processing regions found in the frontal lobe of the brain. Another frontal lobe region, the inferior frontal gyrus, was also linked to finding music pleasurable. This area handles advanced thought, working memory and pattern sequencing.

The fact that the brain recruits these advanced brain regions may explain why humans seem alone among animals in appreciating music, Salimpoor said.

"We're able to obtain pleasure from a sequence of sound that has no inherent reward in itself," she said.

The researchers report their findings Friday (April 12) in the journal Science.