Why are some smokers able to quit, while others struggle for years to kick the habit?

Provocative new research suggests that it may come down to brain connectivity -- a finding that could pave the way for new treatment options for smokers who are struggling to quit.

The study, conducted by researchers at Duke University School of Medicine, found that people who successfully quit smoking showed greater connectivity in the insula -- a brain region that controls impulses and craving -- than people who tried to quit and failed.

"We know this is a region that’s involved in craving, motivation to smoke and withdrawal," Dr. Joe McClernon, a neuroscientist at the university and one of the study's authors, told The Huffington Post in an email. "Our work increases this understanding and gives us a better sense of other brain areas that are involved with the insula in these processes."

For the study, the researchers conducted MRI scans on the brains of 85 smokers, one month before they attempted to quit smoking. Roughly half of the participants successfully managed to quit, while the rest ended up relapsing within 10 weeks.

Analyzing the brain scans of the participants who had successfully quit, the researchers noticed a striking commonality. They saw greater communication between neurons in the insula -- which is known to be active when smokers are craving cigarettes -- and the somatosensory cortex, which is central to motor control and our sense of touch. The smokers who were not successful in quitting, however, showed less connectivity between these regions, the researchers found.

"The insula is sending messages to other parts of the brain that then make the decision to pick up a cigarette or not," said Dr. Merideth Addicott, an assistant professor at Duke and lead author of the study, in a statement Monday. 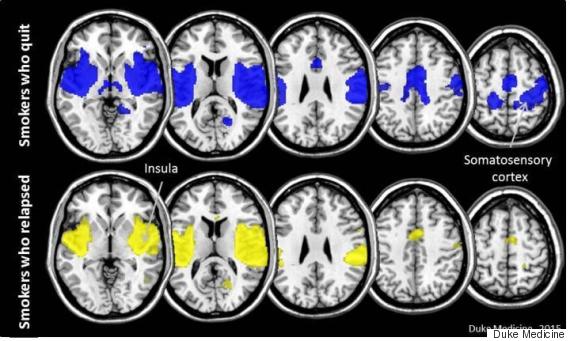 These scans show two layers of the brain in smokers who successfully quit, and in those who tried to quit and failed.

The researchers hope that the findings will set the stage for future treatments to help people quit smoking by specifically targeting brain function.

"Relatively new therapies like transcranial magnetic stimulation and neurofeedback have the potential to modulate brain function in ways that could improve cessation outcome," McClernon said. "Our research provides the data needed to target those therapies at the brain regions that matter for cessation."

The findings appeared last month in the journal Neuropsychopharmacology.