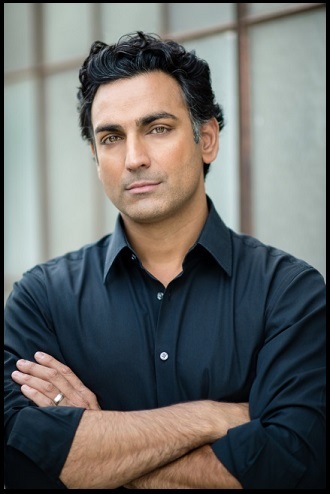 How did you get attached to FOX's show Superhuman?

About a year ago, the people who made the show called City of Hope wanting me to come in and talk to them for a while. I think they may have seen me from KTLA Morning News, where I am a regular contributor. They contacted me through my work.

Some people don't believe in superhuman abilities. What exactly are we talking about here? Who should watch this show? Besides a contestant winning money, what is the purpose of this show?

Think of it this way, we all watch the Super Bowl or the Olympics and we know what superhuman, or world class physical abilities are. Well, our world has people with remarkable brain talent, not physical fitness but cognitive/brain abilities. So the show is really for everyone because the young people who are in the show are remarkable with amazing back stories and good intentions with what they are going to do with the winnings. My role is to explain what is so remarkable about their brains and highlight those superhuman abilities such as sounds, smells, mathematical computations etc. When you watch the show, you almost can't believe what you're seeing. Frankly, if I hadn't been there I would have thought it was CGI or Hollywood magic. But I was there, and they do the performance under the pressure of a real audience just like an Olympian would.

What made you choose cancer as one of your main focuses?

Every year, they graduate about 17,000 medical students and everyone chooses what they want to go into. You get to choose what type of physician or surgeon to become, and more importantly how much of your life you want to dedicate to the sick. So, I always wanted to take care of the sickest of the sick and cancer patients who need brain surgery are just that. It's not just about having capable hands, it's about the humanity that is required to connect with those in crisis and profound illness. My patients can tell that I have my demons that I'm working through, I have suffered and by harnessing that I do my best to connect with people who are dying. In that way it is cathartic for me. I am my truest self with cancer patients. I'm there to help and they're there to receive help and to me when someone trusts me to open their skull to dissect a cancer of them, this requires the closest of human connection.

What exactly is a neurological disorder?

To explain that, let's go back to how we're built. We are flesh and bone and there is a very interesting flesh inside us called the Central Nervous System. It's white even though it gets a ton of blood flow. Think of it as a jelly fish floating inside a home of bone and muscle. This command center, the nervous system, wires all of what we are. Thomas Edison said the body is just meant to carry around the brain. So, a neurological disorder is when disease affects the central nervous system. This flesh that is that amazing place that leads to consciousness and faith, beauty and art, also can get diseases just like anywhere else. So I go in there and physically try to fix it as a brain surgeon.

You're a Neurosurgeon/Scientist with an M.D and Ph.D. When you were a boy, is this what you dreamed of becoming? At what point in your life did you choose this direction? Why?

I have had a very unconventional path to becoming a brain surgeon and scientist. I dropped out of college when I was 19 and worked as a security guard for a year, and of course went back, motivated by my then girlfriend who is now my wife. I just wanted to put my best foot forward and see where it went. What I realized in my neurosurgical training was that surgery helped patients live longer, but often it did not cure them. I realized that scientists create and invent medicine, and cancer cures was what they needed. So I took on a parallel, a second training as a neuroscientist and I brought that in as a complement to being a neurosurgeon. That's where my title become MD and PhD. Luckily, City of Hope offered me the chance to come in and work on both. Part of the week I would be a brain surgeon and part of the week I would be a brain scientist. It was a natural fit and they wanted me to do both. Some professions complement each other and I am fortunate to have this opportunity.

You are currently seen on TV regularly as the health and medical correspondent on LA's top rated KTLA Morning Show. With such a busy schedule, where in your schedule do you have time to continue your research and seeing patients?

I care for patients at City of Hope. I provide medical care several days a week. I also have a few days in which I am a scientist, which is a creative endeavor. Scientists need to be creative like artists need to be creative, but scientists are not trying to come up with a new sculpture or painting. They are trying to understand what biological narratives explain the world around us. To me, there is design in nature, for example, the branching pattern of lightning bolts and the branching pattern of blood vessels in a cancer have a similar look. The difference is that with art it's up to critics to decide if it is good or not. When you discover something about nature or the human body it is undeniable because you test it with experiments and prove it to be true. Other scientists from across the world then challenge your discoveries. They may or may not agree with your findings. It's not getting other people's vibes or impressions, to see if you impressed an art critic. It's more about discovering something true about life.

My daily routine is no routine other than to be there for my three sons and be a big part of their life. Other than that, I keep it fluid with rules to a minimum in order to be creative. Surgeons have to be creative, because it's not like fixing a car where everything is the same on the inside. Every cancer eats you up differently and needs to be cut out accordingly. So as a surgeon I am a sculptor. Instead of marble and a chisel, it's the human brain and a scalpel. As a scientist I am daydreaming about the biology of the brain and cancer and that can happen anywhere whether I am watching Game of Thrones at night or stuck in LA traffic. It comes down to the question of are you dedicating your mind toward, and I'm obsessed with trying to figure cancer out. I want to come up with medicines to knock cancer to its knees, because my hands just aren't enough.

You speak Spanish and English. What is your family's heritage?

I have a multiracial family.

What was going through your mind during your very first brain surgery?

That's a great question. It wasn't when I DID my first brain surgery it was when I SAW my first brain surgery. I had seen many other parts of the human body opened up and manipulated by surgeons with tools and closed up. But the first time I saw the skull opened up and witnessed a human brain inside of a living person as it pulsates it took my breath away. I thought maybe this is the highest achievement that represents humanity. One brain, moving through a structure of flesh and bones to help manipulate and modify another person's brain and what amazed me the most about that was the trust one person must have in another. The patient places trust in a complete stranger and that can only come from respecting the other person's profession and craft. It made me understand that the human brain is the most amazing thing in the universe -- not Mars, chemistry, machinery or anything else. The human brain and how flesh can create consciousness is the greatest feature in the universe. Seeing it -- flesh of the brain -- was unreal. And to be able to manipulate something so marvelous to benefit my patients helps shape my identity and gives me some internal swagger.

My life has been about accidental fortune and lots of help from people along the way. It's not a lot of planning and that's how I ended up on FOX's Superhuman. I'm no longer easily offended but if you want to upset me, call me a "TV Doctor". That term is an insult and meant for posers. I am a brain surgeon and scientist and you can see me in the trenches not only in Los Angeles taking care of patients but also in other places trying to bring up the brain surgery care for children in children's hospitals. INCA is a private group of brain surgeons who take the time and equipment to children's hospitals around the world and take time with talented and local brain surgeons and show them some modern tricks to improve the available care. We use our vacation time and our personal resources. I'm not looking for any donations or sponsors. So, for example, a mother in Peru or the Ukraine can bring their sick child to the charity hospital in their country's capital (Lima, Kiev) and potentially get modern care like the children in America. That's the true dream, to have equal healthcare for people who really need it no matter where they are from. No one can stop me from that dream. This labor of love can't be stopped because of my will and my craft...a craft I have been lucky to learn.