Telepathy is a staple of science fiction--just think of Mr. Spock or the Jedi knights. But new research shows that mind-melds no longer belong only to the world of make-believe.

An international team of scientists demonstrated what they call the first direct brain-to-brain communication, sending the words "hola" and "ciao" between two people thousands of miles apart.

"We were able to directly and non-invasively transmit a thought from one person to another, without them having to speak or write," study co-author Dr. Alvaro Pascual-Leone, a neurologist at Beth Israel Deaconess Medical Center in Boston and a Harvard Medical School professor, said in a written statement. 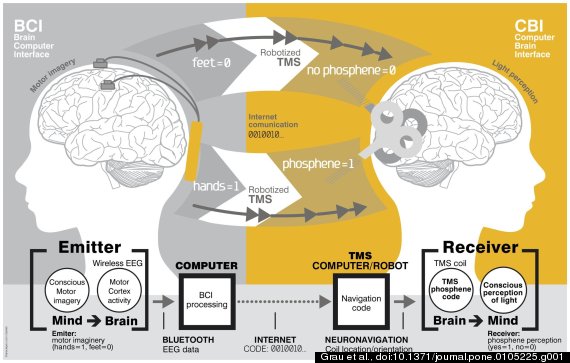 How did they do it? Pascual-Leone and colleagues attached electrodes to one person's brain in India and to the brains of three people in France, and then asked the person in India to "send a message" to the others.

The researchers used an electroencephalogram, which records electrical activity in the brain, to detect the message from the sender's brain.

Then a computer translated the message into binary code and emailed it to France, where it was converted back into electric pulses and applied to the "receivers'" brains via a process called transcranial magnetic stimulation. The pulses produced flashes of light in the subjects' peripheral vision, which they could decode to find the original message.

Photograph of message sender (left) and receiver during the experiment.

It's not the first time scientists have linked humans in a brain-to-brain interface. Last year, a University of Washington scientist successfully sent a brain signal over the internet to control and move the hand of his colleague.

While current brain-to-brain interfaces are rudimentary, scientists envision a more sophisticated version of the technology that could facilitate communication for people who have problems speaking, such as stroke victims.

"We hope that in the longer term this could radically change the way we communicate with each other," Dr. Giulio Ruffini, a theoretical physicist at Starlab in Barcelona and co-author on the study, told AFP.

The study was published online Aug. 19 in the journal PLOS ONE.