The last time I saw Brian, he had just gotten his prom photo taken and ran a 5-minute mile on the school track team. But now, as I looked in front of me stood a grown man with a beard donning a set of nurse scrubs.

"Mr. Guay... is that you?" he said as I carefully adjusted my paper-thin gown that doctors give patients before a physical exam.

"Why yes, it is," I replied with a sheepish grin feeling a bit like a celebrity on one hand and, on the other hand, making sure my gown covered my buttocks.

"How have you been Brian? You still running these days?" I said.

He shot back a look of surprise.

"You remember me?" he said.

We talked for a few minutes and in that short span of time as Brian took my height and weight before the doctor arrived, he had said what I cringe to hear.

"I'm currently working at (current job), but thinking of going back to school for (my passion)."

Brian explained to me that he originally went to school for nursing because his parents had said it was the smart thing to do. But he's bored -- really bored -- and he feels the calling to follow his inspiration and open up a food truck.

Brian is not alone and unfortunately, I hear this quite a bit. Like Brian, many people leave high school to begin a career or get a degree in something that is safe.

I don't blame them at all. Growing up in a blue collar family, I know the feeling of depending on the next paycheck. It's a terrible feeling. So I get safe.

But playing it safe rarely works out.

So, what holds people back from following their bliss and living inspired? A bit of ancient wisdom may have the answer. 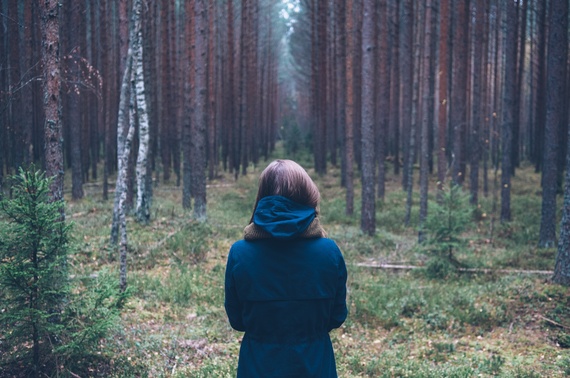 The Four Branches That Hold Us Back

We are a deeply rooted species that is resistant to change, say Chip and Dan Heath, two sociologists at Stanford who have devoted their lives to helping make large-scale societal shifts a real thing.

The Heath brothers explain that over time and through generations, we have come to define (and very slowly redefine) the idea of "normal" or "common sense. This clouds our perception as we go through life and steers us away from any path that isn't considered safe.

In yoga, we call this Avidya, which translates as the film that covers our ability to see clearly. To see clearly, we need to let go of the following:

Attachment is the tug-o-war between owning things and having them own you. It's what makes some people need a Rolex to feel successful and others (like some Jains in India) to literally have (or wear) nothing at all to feel content. It's getting upset when you can't find that favorite pair of yoga pants and getting upset when someone offers unsolicited criticism. It's that feeling of disappointment when a dream you held on to for so long is holding you back from living the life that is waiting for you.

Join me in trying this: In meditation or perhaps when you have only a few seconds in the subway commute and are feeling upset, repeat the mantra "Let Go." On a deep inhale say to yourself "Let" and on the exhale say "Go."

Like you can't see the current when in the river, but can easily see the swift moving water when sitting on the shore, ego is there with us as we swim through life. Ego is the wall we put up to separate ourselves from another. It's the identity crisis that follows losing a job and the reason we stand in line for hours on Black Friday to get the shiny new object for a price we can actually afford. It's the fancy letters we put before our names to represent a degree and the selfie I took at the gym yesterday. But it's also feeling guilty when you do have the shiny new objects, the fancy letters, or the bulging biceps.

Fear is doubting our ability to slay the Arthurian dragon that protects the holy grail. It's not taking that first step because you don't feel ready to run a marathon or not joining a yoga studio because you don't look like a Lululemon model. It's bundling up our kids so much they look like a fluffy marshmallow when they board the morning school bus. It's the voice inside our heads that like to say, "you can't do that" and it's the reason we idolize celebrities as if they were any different than us.

Join me in trying this: Often times, we fear most what we can't control. So, find something you do have control over that you're scared of and do something about it. For me, I'm terrified of heights and I can control whether or not I go rock climbing in a safe indoor facility. And boy, you should see me. I shake and quiver as I climb up those rocks and probably look ridiculous. But I'm pushing through fear.

Rejection is falling off the proverbial horse and not getting back up on it to try again. It's getting bullied on the playground and taking a new route home to avoid the bullies. It's appearing on Shark Tank in hopes to land that needed seed funding only to be laughed off the stage with no money in the bank, then never starting up a business again. Simply put, it's settling for anything less than the greatest version of yourself.

Join me in trying this: Whenever you feel scared to try again, read the biographies of the people you wish to emulate. Like Michael Jordan and Thomas Edison, living out the greatest version of oneself always has a not-so-beautiful trail of failures that lead to that one ten-year-overnight success.