The Inglewood man suspected of wounding four people at a Halloween party on USC campus was charged Monday with four counts of attempted murder.

Brandon Spencer, 20, is scheduled to be arraigned this afternoon and prosecutors are expected to ask for bail to be set at $2.04 million.

The LA County district attorney's office alleges that the crime was gang-related, and that Spencer shot victim Geno Hall to "benefit a criminal street gang."

Hall is a former high school football star from Crenshaw and is on the team at West Los Angeles community college. He was wounded critically but is expected to survive, and three bystanders suffered less serious gunshots.

Spencer is a security guard and possesses an active security guard license, reports the Los Angeles Times. Spencer was arrested Thursday morning just minutes after the shooting, which took place outside USC’s Grand Ballroom Wednesday evening at around 11:30 p.m.

Neither the suspect nor any of the victims were affiliated with USC, confirmed the university. Vice President for Student Affairs Michael L. Jackson indicated to Neon Tommy that officials will take steps to cut down on open campus events.

"We have to get a better handle on guests who come to our campus who may not even care about who we are or what we stand for,” said Jackson to Neon Tommy. “This current practice of encouraging anybody to come to USC needs to be minimized as much as possible.”

But it's exactly that kind of ID-checking policy that one event organizer blamed for the shooting. Twan Evans, an event organizer for party co-sponsor LA Hype, criticized campus police for creating a backlog of restless partygoers in order to check everyone's ID cards.

The shooting broke out "when everyone was upset they couldn’t get in," said Evans in a separate interview with Neon Tommy. Evans also said it was the first event he had been to that required student ID cards.

The Halloween incident is the third USC-involved shooting this year, and officials have vowed to change the university's security policies in the wake of last week's violence.

For now, USC's Black Student Assembly, which had co-sponsored the Halloween event, announced Monday that they would stop hosting parties for the rest of the semester. Instead, the organization will focus on cultural programming and work with the university to reform campus security. In a letter to the Daily Trojan, BSA executive director Lamar Gary wrote:

These are times of hardship not only for the Trojan family but also for communities well beyond the boundaries of USC’s campus; it is therefore critical that we hold one another accountable while also taking great care not to denounce the members of our own community. Condemning one another will only further stratify and marginalize our family at a time when we each need harmony, support, and encouragement. We especially ask all Trojans to be cautious of isolating and targeting your fellow students, many of whose very lives have been affected by the incidents.

UPDATE: Brandon Spencer pleaded not guilty to four counts of attempted murder and is being held on $2.4 million in bail, reports the Associated Press.

His lawyer, James M. Simmons, told reporters there are identity issues surrounding his client. He said two men were initially arrested but only one was charged. He suggested that witnesses gave conflicting accounts of the incident to police.

Simmons said his client has no criminal record and had been scheduled to begin classes Monday at UCLA in a nursing and EMT program. He declined to comment on whether he was a gang member.

At a news conference, Simmons said he was asked by the defendant's father to tell everyone: "Mr. Spencer is a good person." 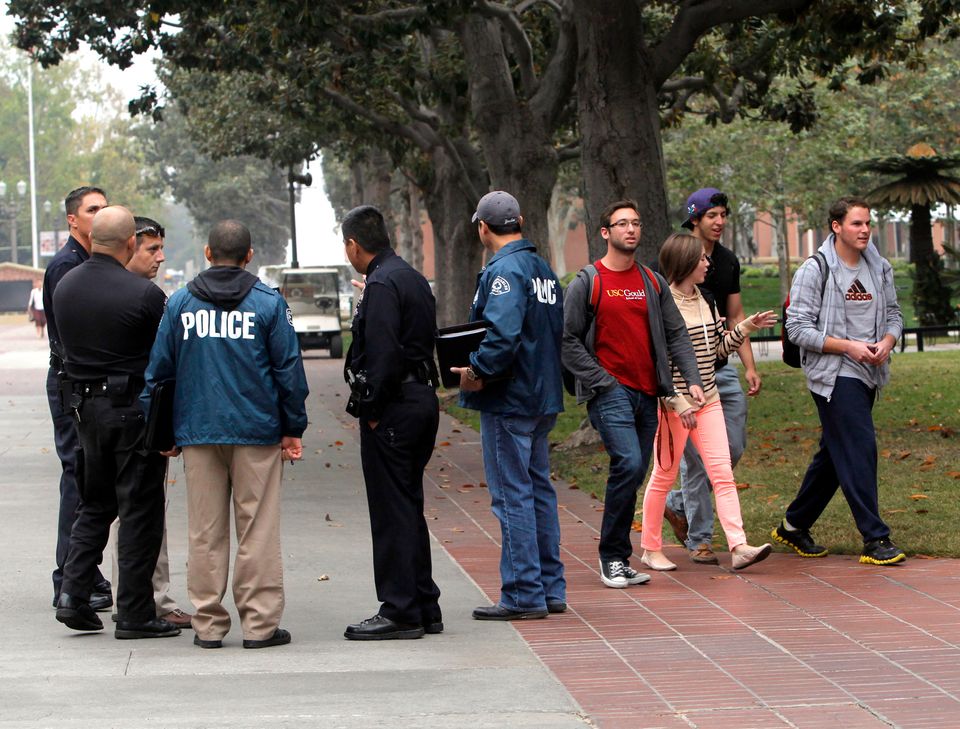 1 / 7
University students walk to classes as Los Angeles police officers investigate a shooting that occurred Wed. night at a halloween party on the University of Southern California Campus in Los Angeles on Thursday, Nov. 1, 2012. Los Angeles police say two men apprehended after a Halloween shooting on the USC campus are still being interviewed and three of the four people wounded have been released from the hospital. (AP Photo/Nick Ut)
AP