NEW YORK -- New York City Police Commissioner Bill Bratton claimed at a packed city council meeting on Monday that the police don’t have a problem with people who dance on the streets to make a living.

Arrests of dancers who perform on the city’s subway trains have tripled under his watch, but Bratton said the cops don’t interfere with dancers who stick to the streets and parks. To support his point, he referred to the young men who regularly perform outside of City Hall, where the hearing was held. “We don’t bother them,” he claimed, before praising the dancers for providing “great entertainment.”

But a video captured by HuffPost outside City Hall last Friday shows that at least some of the officers under him do, in fact, bother those very performers.

HuffPost was outside City Hall on Friday reporting on another story when the cops disbanded a group of performers who had just finished their first show of the day and were about to start the second one.

“This is, like, an everyday process,” said a performer who goes by the stage name Day-Day.

The police handed the dancers a $100 ticket, citing their use of a portable speaker to play backup music. They also confiscated the speaker. Under city law, performers must apply for a permit to use amplifiers in public. But few street performers abide by this rule, said Matthew Christian, the co-founder of BuskNY, a group that advocates for people who perform on the New York City subway.

“It just doesn’t go with the nature of public performance to choose the location and the time weeks in advance of performing,” he said.

The police department did not immediately respond to a request for comment about the apparent inaccuracy of Bratton’s claim about not targeting dancers. On Monday, a tweet from Vocal-NY, a local group that opposes the criminalization of people for drug offenses, appeared to show cops ticketing dancers in the same area outside City Hall, just minutes before the hearing began.

The crackdown on dancers has become a flashpoint in the resurgent debate over the “broken windows” theory of policing. The theory holds that when petty offenses are left unchecked, violent crimes and chaos follow. Bratton is a longtime champion of the approach, but critics say there’s no evidence that it works. They point to data suggesting that the police apply it in a racially biased fashion, ticketing and arresting a disproportionately high number of blacks and Latinos for minor offenses.

Bratton’s comments at the city council hearing came in response to concerns raised by Robert Cornegy, a Democratic councilman representing a largely black area of Brooklyn. Cornegy claimed there have been no reports of injuries associated with the subway performances, and noted that the police response is regarded by some as “the over-criminalizing of New Yorkers participating in the informal economy.”

Subway cars are “not for dancing, if you will, no matter how entertaining,” Bratton said. “One of those kids falls and basically paralyzes himself, you and I will be paying that young man for the rest of his life.”

The council had summoned the hearing to inquire into the details of a department-wide retraining of officers on the use of force, which Bratton had ordered after the death of an unarmed black man named Eric Garner in July. Garner, a father of six, died after the police seized him in a banned chokehold while attempting to arrest him for the sale of loose cigarettes -- a classic “broken windows” offense.

In the weeks since then, civil-rights advocates and subway dancers themselves have staged protests against Bratton and the “broken windows” approach to policing, but Mayor Bill de Blasio (D) has stood by his police chief. “Breaking a law is breaking a law,” he said at a press conference at City Hall in July. “It has to be addressed.”

UPDATE: 8:55 p.m. -- An NYPD spokeswoman said ticketing people for playing amplified music is "totally different" than bothering them, to use Bratton's word, for performing.

Those Street Dancers Bill Bratton Said The NYPD Doesn't Bother? Here They Are Getting Ticketed
NYPD Crackdown On Subway Acrobats 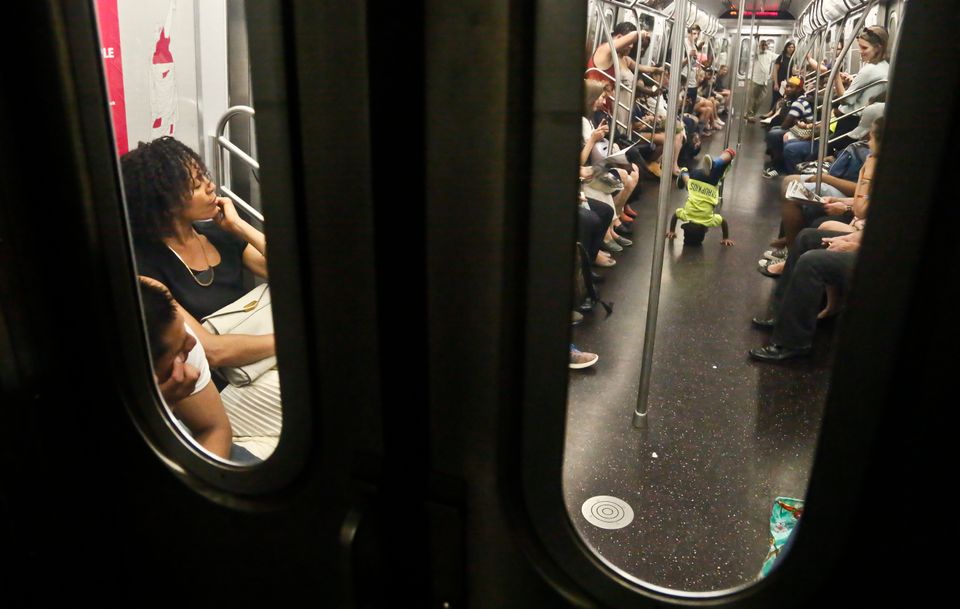 1 / 5
NYPD Crackdown On Subway Acrobats
In this June 17, 2014 photo, subway riders are treated to a performance of acrobatic dancers from the dance troupe W.A.F.F.L.E., which stands for We Are Family For Life Entertainment, in New York.
AP