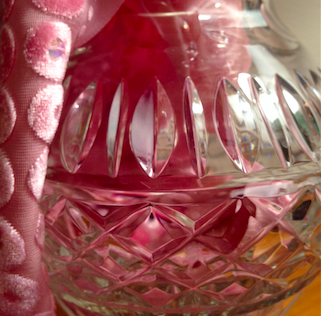 Starting March 11, Bravo TV's Real Housewives of New York City is up again, like a luxury handbag-hurling dance troupe, called back up on stage for Round 6.

I have lauded Andy Cohen from the get-go on the brilliance of his reality TV coupe and still do. Not only is RH a marketing genius and ratings monster, it is 21st century pop culture/sociology at its juiciest and most accessible. Having netted a choice demographic, RH is a guilty pleasure for a whole lot of us and was recognized as such years ago. If there aren't already university classes on the series, there will be.

The Real Housewives series inspired a term I coined to describe the so-called housewives and their evolving stories and conditions as lived and seen through the lens of reality television: the Crystal Fishbowl Effect. Almost universally, these shows feature charismatic workaday women and their even more ordinary family members, significant others and shirttail scraggling friends who are all plunked down -- knowingly and willingly -- into a costly and lavishly faceted Crystal Fishbowl, there for all the world to see as they circle about, unable to hide or control what all exactly can be gazed upon and discerned. The fact they are recorded and watched affects everything they do, say and experience, no matter how much we (or they) would like to think otherwise. Different from the Hawthorne, or Observer Effect, the results are not necessarily good or positive, but ramifications abound and are ongoing. The world infiltrates their homes and lives for our benefit (viewer/network/sponsor), not theirs, much as it might initially seem the other way around.

The Crystal Fishbowl Effect includes the phenomenon of highlighted exhibitionism that occurs despite the presence of cameras/lights/personnel. Where one would have once wondered how this might curtail "realness," we have witnessed over the years not only a lack of filters but heightened and reactionary, over-the-top-behaviors coming from these cast members as the desire to attract attention begins to override every word said and every choice made, where the realness as we see it becomes not only a showing of true self but of the deepest, darkest self. Innate competiveness aside, I believe that in time, the ever-more addictive quest for attention more fully permeates their beings and as a result takes over and completely re-routes their life paths.

Moreover, where one would have thought some "best" or at least more "company-like" behavior might kick in with the watchful eye of a nation upon them, the Crystal Fishbowl Effect brings to light a group of women who launch into soul-bearing, almost childlike candor as they disclose not only consciously but more importantly sub- and unconsciously layers upon layers of themselves to their viewership to the point where we read them like living, breathing books. Sure, we read into them ourselves as well, but that is and always has been a viewer's prerogative. The disclosure we get to witness is in every tone of voice, every gesture and every bit of body language -- especially when words to deed or demeanor are in conflict with each other. It is very much in every bit of pot stirring and dishonesty; likewise, it is in every bit of honesty, shining brightest and most painfully when doled out as destructive outspokenness, where there is nothing to be gained and no positive outcome in sight. I see not only wrestlers in stilettos, I see children vying for position on a playground; I see pack animals on a tundra, fighting for sheer survival.

One sigh-evoking realization of the whole Crystal Fishbowl Effect is that, despite the opportunities afforded these women (and contrary to their frequent proclamations professing this), their paths of personal evolution remain haphazard at best. While materialistic pursuit and acquisitions are at full throttle, ongoing, old hurts surface or are dredged up at regular and frequent intervals which quickly shatter the sparkle and shine. Fashion-based careers are concocted and books might be published, but they are the crowning glory of celeb-driven, meritlessness in the retail and literary worlds. And while one gal now has her own talk show (a common route on the celeb highway of opportunity), she also played along in a frighteningly questionable story as regards commitment and family, where the prices paid are nearly as big as the bucks she has made.

We ask ourselves after watching for what is now years: How hard and hurtful can it be when the approval anyone seeks from their peers is literally multiplied by millions, and how more real could all this redundant dysfunction be, in particular when lack of approval enters the realm of ridicule? Bravo, the mentoring entity itself, airs thematic episodes that highlight outrageous behaviors and events, where no level of humor is too low or taboo. In the end, what might redeem the "housewives" also binds us to them: We are just who we are, no matter the trimmings or trappings, and the rest is bullshit.

To evolve and grow as a person is an intellectual process. Shows like RH demonstrate that money/fame/fortune/u-call-it most likely only stunts it. Materialistic windfall sidetracks the most stoic personality, and reality stars are Hollywood's lottery winners. With RH, we see ever-increasing acts of aggression, marriages and relationships that crumble in light of fragile, foie gras egos; we see people who over time don't seem to be able to separate themselves from TV-land in their life choices, who continue to compete from within their contrived circles for places in a pecking order that is constantly being rearranged. Only circumstance and manipulation of the moment, which includes more crocodile tears than I ever would like to think my kindred, sister-women capable of, seem to shake that order up, for soon enough all reverts back to a hierarchy that is commensurate with the sensibility and fortitude each one will have brought with them into their respective series as an inherent part of themselves. And most of them come back for more.. fascinating....

As RH entertains, it fosters renewed appreciation of the everyday, reminding us of the grand lesson that money does not buy happiness. To that I say, "Bravo!"