An activist leader in the Amazon won protection from Brazil's National Security Force, but continues to live under threat. At the same time, loggers run free.

On May 25, Brazil shamefully faced the brutal murder of a husband-and-wife team of forest activists on the same day that the country's House of Representatives voted on the Forest Code -- legislation that environmentalists warned would increase deforestation of the Amazon and violence against those who defend it. After news spread that the activists had been shot at point-blank range and had their ears cut off, Brazilian President Dilma Rousseff created a national task force comprising ten government agencies, including the federal police and the military, to address and combat forest violence.

Almost one year after this task force was created, one of its charges is living proof of how federal intervention in the Amazon is still far from enough.

“They will kill me. And before dying, I will be tortured,” says rubber-tapper and Amazon forest activist Nilcilene Miguel de Lima, wearing a bulletproof jacket and escorted by nine heavily-armed policemen.

Nilcilene might be considered lucky. She belongs to the select group of six Amazon activists under 24-hour protection by the National Security Force, an elite branch of the Brazilian Police. The activists under protection were selected by the national task force from a list of 170 rural farmers and forest activists threatened in 2011. Last year, 32 were murdered as a result of land and water conflicts in Brazil, according to the Brazilian Pastoral Land Commission.

The threats against Nilcilene began in 2009 when she became the president of the Deus Proverá [God Will Provide] Association, created by small farmers in the local settlement where Nilcilene lives in the southwestern region of the Brazilian Amazon. The following year, after filing complaints and gathering petitions against land invasions and illegal logging, Nilcilene was beaten and had her house burned in an arson attack.

In May 2011, she was wrapped in a blanket and smuggled out of her home to outwit a gunman who was waiting for her at the front gate. Finally, the National Security Force was deployed in October to ensure that she could go back home and continue to report on problems in the region.

But at night, even with two armed policemen posted at her front door, Nilcilene cannot close her eyes without taking sleeping pills. She knows that she has protection for the time being, although the surrounding situation has not changed at all. And adding her name to the list of escorted activists has, so far, been the only action the federal government has taken to counter the growth of organized crime in the region. The National Security Force has been entrusted with protecting Nilcilene and Nilcilene alone. Although she personally is now safe, the criminals continue to operate freely.

Every day, the National Security Force car drives by trucks lacking license plates, loaded with timber and driven by the same people who still find ways to threaten Nilcilene. The policemen cannot give interviews, but off-the-record, some of them asked this reporter: Why are we entrusted to protect an activist who reports crimes that the government does not punish? 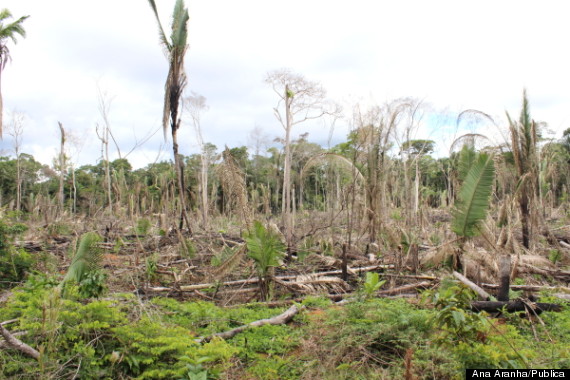 After criminal charges were filed by Nilcilene and Adelino Ramos (a local leader from the region who was killed last year), the local police opened two investigations in 2010. Later that year, the court issued a warrant for the temporary arrest of 23 men suspected of illegal logging, illegal land appropriation, personal injury and death threats. Of the 23, fewer than five were arrested, and then only for a very short period.

Today, all of the men roam free and, right before the very eyes of the National Security Force, continue to commit the same crimes for which they were charged two years ago.

Nilcilene’s settlement is in one of the areas known as lawless land -- a reality still common in some regions in Brazil’s northwest. Bordering native forest, her settlement is located in the rural area of the Lábrea district.

Due to its remoteness, the Amazon state police rarely visit the settlement or surrounding area. When asked, some settlers claim that the arrival of Nilcilene’s escorts from the National Security Force was the first time they had ever seen a policeman in the area.

As in all places where the government does not operate, the region turned into a get-rich destination for outlaws.

In addition to lacking electricity, telephones, a health center and a police station, the 800 or so families in Lábrea live under the rule of a ruthless gang of gunmen. The gang consists of 15 ‘professionals’ from the states of Rondônia and Mato Grosso, as well as from Bolivia. The armed members sell their services to land appropriators and illegal loggers, who ignore anything (and anyone) in their path to reach the green gold: forests full of precious hardwood trees like ipês, cedars and angelins.

The individuals interviewed include settlers, rubber tappers, chestnut collectors, and a number of small farmers who have documents proving that they own the land. Many have reported these crimes to the police and have sent letters asking for help from federal and state prosecutors, but their pleas go unanswered.

According to their accounts, the gang operates as follows. The land appropriators hire gunmen to expel those on the land they covet. First, they warn small farmers and settlers that their land has been "bought." Usually they give the families a deadline to leave as they put up new fences and gates. Once the deadline has passed, and assuming the rightful owner has not left, the intimidation begins: they block access to the roads and make daily rounds firing shots into the air. At this point, should settlers happen to walk by gunmen on their own land, they are subjected to searches, humiliation, robbery and even physical attacks. At this point, some families leave their homes for a while. Often, when they return, they find their house and its contents burned. 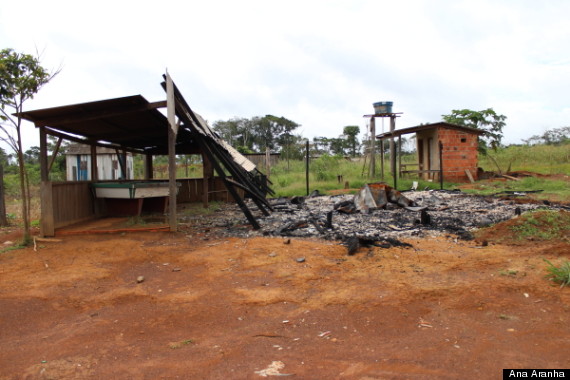 Burned house inside the settlement.

This happens on individual plots and within the two settlements demarcated by the National Institute of Colonization and Agrarian Reform (Incra).

Loggers simply invade protected forest, which by law must be preserved by the settler or small farmer who owns the land. The loggers allegedly cut down trees, steal them in the night, and then hire gunmen to prevent the land owner from putting up any sort of protest. Many small farmers are so intimidated by the gang that they watch the crimes against their land without complaint.

For those who still demand justice, the gang retorts with mockery: "Justice and shit here are one and the same."

The families who resist leaving their land and giving up their trees live in fear. Women entrust their children to relatives and refuse to sleep at night. Men trace escape routes on the wooden floors of their simple houses. As threats rise, some spend the nights outside their homes. So as not to be found, they spend nights lying on boards hidden in the forest.

As long as Nilcilene is accompanied by an official armed escort, she believes she is safe from the violence. However, the opposite is true for everyone else around her. Since she has returned to the settlement, the families who originally helped her form the association have received and increasing number of threats and assaults. The land appropriators and loggers that Nilcilene accused know that the National Security Force has been entrusted with protecting Nilcilene alone, and that their retaliation against her relatives and friends is as effective as ever.

In the first week after she returned to the settlement, Nilcilene's brother, his wife, and daughter were threatened and told to keep quiet. She knew something was wrong when they knocked on her door to say goodbye. "Nilce, don’t argue; I have Dad and my children to look after," said her brother when she insisted on knowing why they were leaving.

The same thing happened a week later; this time with the association’s treasurer and his wife. The policemen who were on the night shift heard them opening Nilcilene’s gate. From afar, the lantern illuminated the couple: the woman was clutching a crucifix and her husband, the treasurer, was helping his wife walk down the path. The couple spent the night awake at Nilcilene’s house. The woman cried a lot and repeated, mantra-like, “Do not let him catch me."

The police tried to convince them to report what had happened, but they said they could not speak out. The couple departed in the morning, leaving their land and house behind.

During a visit to check on her friends’ abandoned house, Nilcilene was overcome with discouragement. "I'm alone," she sighed, crying.

Nilcilene knows that the next target could be the family of the association’s deputy treasurer, Roberto Carlos Rufato. He works on his small farm and lives with his wife and four children, who are 4, 9, 10 and 12-years-old.

Carlos declined to say if the family had been threatened since Nilcilene’s return. He is afraid to provide any information whatsoever about problems with gunmen. "I’m not saying a word, or they’ll hunt me down. But please write in your article that we desperately need a police station here," was all he said.

Two days after this article was originally published in Brazil, Nilcilene’s husband, Raimundo Oliveira, found the family dog shot in the head and laid out at the front gate. “He panicked; Raimundo was so scared he didn’t want to move the dog’s body. Now our home is full of vultures," Nilcilene says. Raimundo is also under threat. He cannot stay in the house at night if Nilcilene is not there with the escort.

Nilcilene and Raimundo do not make plans for the future. Where they will be and how long they will live depends a lot on government actions in response to the heightened security demands in the southern region of the Amazon. If intervention is restricted to simply escorting Nilcilene, the couple knows that there is no future for them there. But they also resist to the idea of leaving behind the land for which they have fought so hard.

“When the National Security Force leaves, my partner and I will have to leave, too. If we stay, before being killed, we will be tortured. And why?” Nilcilene asks. “Why do we have to live like that? Why don’t the authorities take action?”

This article was translated and adapted from the original version in Portuguese. Click here to read the original on Publica, whose journalism you can support here.