A week in Sao Paulo gave me a really interesting window onto the state (and soul) of the country. Two observations.

The people's openness for profound change has never felt stronger. I felt that openness at the launch of Novos Urbanos, a sharing economy initiative around collaborative, conscious consumption in Sao Paulo. I felt the openness in sessions with students and executives at FGV, one of the major business schools. I felt it in a talk with a group of social entrepreneurs and "COOs" (Children Of Owners) -- that is, millennials who soon will move into CEO roles in their family businesses, often with quite different lifestyles and social aspirations than their parents' generation.

I also felt it during a keynote I gave at FNQ, the National Quality Management Association meeting, which was attended by 400 executives representing Brazil's industrial establishment (people in the room represented 80 percent of the country's GDP). Even this rather conservative group was completely in synch with the need for a profound transformation of business, society, and self in order to create a society that is more sustainable, resilient, equitable, and aware. So that was my first impression: the door to profound change is wide open in the eyes of so different groups in Brazilian society today -- much wider than probably they (or we) realize.

My second observation concerns a sense of collective paralysis and frustration. In one of the workshops I joined with business leaders, the participants went on learning journeys across the city to immerse themselves in hotspots of social change. Having returned from their immersion journeys, they were asked to create a 3-D model of what they saw and felt, of how they experience the current system.

Here is one example of a model the group came up with. The model depicted different levels of influence and power. At the top is a corrupt government and big banks. The first picture shows big government as they perceived it: towering on top, taking money under the table, and NOT LISTENING to ordinary citizens. 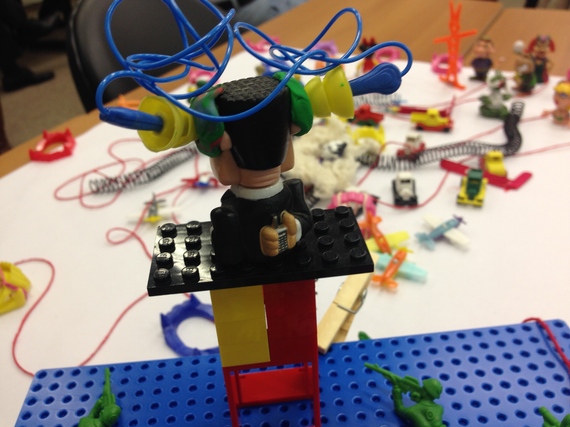 And then, on the ground level, you have a crowded mix of players who all struggle for their livelihood and to make a living. And when you look at the margins of that picture, you see three types of excluded participants, outside the gates. They were (1) the "voiceless" (people whose concerns are not heard), (2) the "next generations" (children and the unborn), and (3) "nature." 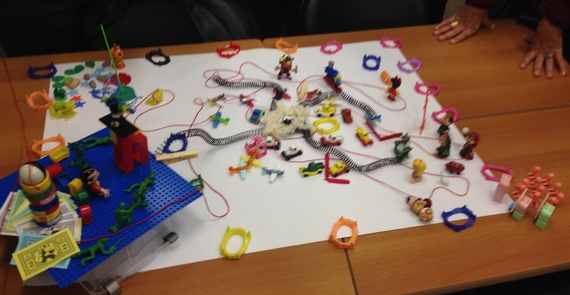 Also in the second picture, behind the government, you see a massive time bomb that is ticking, depicted in the form of a soccer ball...

Below is another shot that looks at the same situation from the perspective of the excluded next generation. Keep in mind that these models were formed by middle management business people, not by radical groups at the margin. 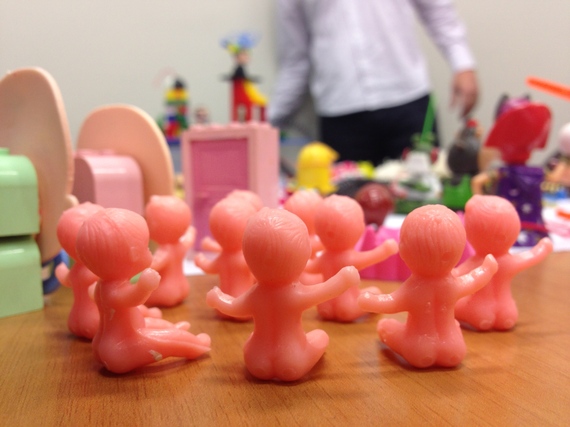 My dual impression from the week in Brazil boils down to this: amazing and inspiring individuals and groups, a strong sense of collective possibility--and at the same time a screwed-up system that disregards the voices, aspirations, and needs of too many.

That description not only fits the current situation in Brazil and many other countries across the planet; it also describes FIFA (the Fédération Internationale de Football Association), except that FIFA is probably even more corrupt, ignorant, and self-absorbed. FIFA is a perfect microcosm of what people around the world are frustrated about: a corrupt old guard at the top who don't listen to outsiders, a lack of transparency, an absence of accountability, a system that socializes all costs to the communities while privatizing all profits for themselves (FIFA will take over 1.5 billion dollars back to Switzerland from this World Cup, without even paying any taxes in Brazil).

It will be interesting to see how all of this plays out during the World Cup matches that starts tomorrow (I already cancelled all my meetings for the next four weeks...). Although I felt in Brazil that the door to profound renewal is wide open, does this mean that anyone will walk through it? Will people be able to activate the vast potential of change that many feel is possible today? Or will it get lost in a wave of violence and breakdown? We don't know. It's a very uncertain and fragile situation.

I hope that the various initiatives that were seeded and launched during the week there with several other colleagues of the Presencing Institute--including Novos Urbanos and Health Lab Brazil, which will become part of the Global Wellbeing Lab--will contribute to tipping society toward a pathway of positive change.

Where in your context do you see similar situations of possibility, fragility, and frustration? What's your take on this?

Theory U: Leading from the Future as It Emerges
by C. Otto Scharmer