Brazil's GDP performance has been lackluster since the post-crisis rebound in 2010. Prospects for 2013 look a little better: unemployment rates have remained low, and data from the first quarter of the year suggest improving growth rates. Investment also rose ahead of consumption, which may indicate a more balanced growth pattern (see Chart 1).

And yet the sharp downfall of production, investment and exports within the Brazilian manufacturing sector over the past two years means something deeper is at play. 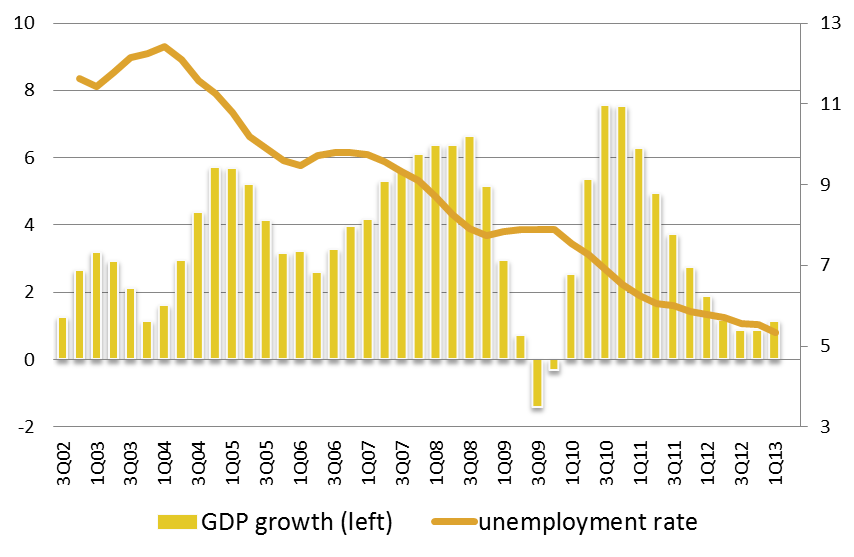 No one can argue that Brazil had a good ride, with a long spell of economic growth. Poverty rates and income inequality have diminished steadily now for more than a decade, with labor market dynamics playing a major role, along with targeted social policies and a steady rise in access to education. However, some of the economic drivers from last decade are clearly exhausted. Some structural reforms and policy refinements implemented between 1994 and 2005 produced productivity increases. In particular I would highlight the consolidation of stabilization gains. This was notable in terms of lower macroeconomic risk premiums and correspondingly higher levels of sustainable credit across the board --and reinforced after the government transition in 2003 with a reassured (and tested) commitment to fiscal responsibility and macroeconomic stability. Gains from the post-privatization revamp in telecommunications, as well as institutional innovations improving credit risks -- payroll-bill loans, a new bankruptcy law, and improved recovery of guarantees also helped. Steady technology-laden productivity gains in agriculture have also been remarkable.

Favorable external factors further supported the Brazilian domestic real-side economic dynamics. Commodity price rises and improved terms of trade (see Chart 2) enabled not only the strengthening of balance-of-payments conditions and external accounts, but also generated reasonably widespread domestic positive wealth effects through agriculture land and real estate. Notice that terms-of-trade gains have not fully reversed and most forecasts of commodity prices are currently pointing out to some hovering around current levels.

The combination of favorable external factors (including wealth effects), productivity gains, improved household credit risk, and government policies of raising minimum wages at a pace above those productivity gains sparked a self-reinforcing virtuous cycle between the steady decrease of unemployment rates (Chart 1) and a booming domestic aggregate demand (Chart 3). However, such pattern of growth was poised to come to an end unless boosted or replaced by other sources of dynamism. The growth spurt in 2010 was the final manifestation of the previous pattern of growth, as counter-cyclical policies mainly anticipated the use of the remaining existing space for sustainable household credit. 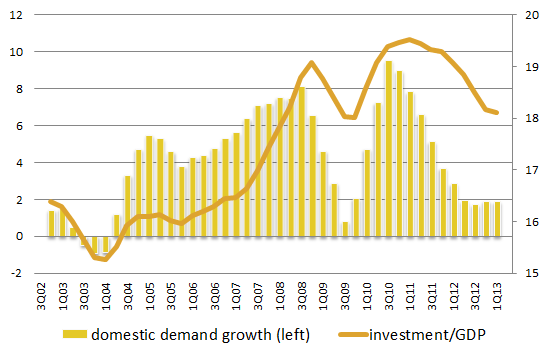 The subsequent fall in investment ratios -- which remained well below 20% (Chart 3) -- has taken place on the private-sector side. According to the Institute of International Finance (IIF) estimates, while public investments increased by 0.4 percentage points to 5.4% of GDP, it was not enough to compensate for the fall in the ratio of private investment to GDP from 14.3% to 12.7% last year.

So, why haven't the entrepreneurial "animal spirits" waken up and taken the growth lead at some point of the long growth spell? Why have more recently private sector investments retrenched so sensitively?

First, it is worth noting that low infrastructure investment was partly behind low investment ratios since the 1980s, a factor that has become an increasingly tightening bottleneck -- and productivity deterrent -- as the economy grew in size. Furthermore, while the macroeconomic dimension of the Brazilian "investment climate" improved, the pace of microeconomic reforms nearly stalled in the last few years. Key financial intermediation reforms have been implemented, but complex tax systems and costly business transactions take a heavy toll on the value added generated by private investments. Large physical investments are hindered by complex, uncertain and costly processes of authorization and implementation.

Second, those factors constrained the manufacturing-industry side as the recent pattern of growth unfolded. While the resource-based tradable side of the economy was ring-fenced by a favorable price dynamics abroad, and non-tradable services could respond to rising wage costs by marking-up their prices, the non-resource tradable part of the economy continued to face increasing costs -- real wages and service inputs, including infrastructure-related ones -- with the result being crushed profit rates. Despite creeping ratios of manufacturing import penetration, the surviving manufacturing park for a while chugged along while domestic demand kept going up. But this was not sustainable which is why, now the combination of rising costs and the perceived inflexion on consumer demand growth looks like a "competitiveness cliff."

Third, the reorientation of public policy chosen by the government has not lifted animal spirits as intended. The emphasis on targeted tax relief and trade measures, and the expanded subsidized lending partially backfired as policymakers generated a wait-and-see (or rent-seeking) attitude by investors. The inclination to cap or drive rates of return in energy and infrastructure concessions has also driven away investors.

On a separate but related front, Petrobras, the state-owned energy company has been overburdened with ambitious and conflictive objectives: raise external finance to comply with its responsibilities on pre-salt oil exploration, contribute to lower inflation by absorbing imported oil price hikes, and implement local-content requirements. The multiplier-accelerator effects of its investments and purchases have thus suffered.

With a nod to the recent IIF report on Brazil (Brazil: waiting for the animal spirits), I would say that animal spirits don't like to be chased or nudged. They react and work better on a stable playing field. Moving to a new investment-led growth cycle will be faster if, instead of short-cuts with policy tinkering, policy makers focus on the structural factors that have maintained investment ratios below the 20% ceiling.