“Press attention is focused almost exclusively on [COVID-19],” Salles said in the meeting, according to a transcript published by Brazilian television station Globo News. “Now is time to join forces to simplify regulation on a large scale.”

Brazil’s Supreme Court released a transcript and video of the meeting on Friday as part of its ongoing investigation into Bolsonaro after former Justice Minister Sergio Moro, who resigned in April, accused the president of improper political interference in the country’s federal police force.

Salles, who has spearheaded Bolsonaro’s aggressive efforts to loosen regulations and increase private investment in the Amazon, argued that Brazil’s agricultural, environmental and other ministries could use the pandemic as cover to strip regulations and “run the cattle herd” through the rainforest. (Beef production is among the leading drivers of deforestation in the Amazon.)

“We do not need Congress,” Salles said.

Salles’ comments in the closed-door meeting validated concerns that Bolsonaro is using the COVID-19 outbreak to further destroy the environment, especially as his administration’s tepid response to COVID-19 transformed South America’s largest nation into the pandemic’s latest epicenter.

Deforestation has continued to surge since the beginning of the outbreak in Brazil, which now has the second-most confirmed COVID-19 cases in the world. This is partly because self-isolation policies further limited enforcement from the beleaguered regulatory agencies Bolsonaro has targeted since becoming president.

Bolsonaro’s government opened up 38,000 square miles of Indigenous lands to mining and other economic activities in early May, and also renewed plans to build a highway through a protected stretch of forest lands, the environmental news site Mongabay reported. Bolsonaro has also pushed to stop regulators from destroying equipment used during illegal operations on protected lands.

The far-right president also placed environmental enforcement under control of the military during the pandemic, further reducing the role of regulatory agencies whose aggressive oversight once helped Brazil achieve impressive declines in deforestation.

The moves follow a playbook that President Donald Trump, a close ally and ideological model for Bolsonaro, deployed in the United States, halting environmental enforcement and fast-tracking unpopular deregulatory proposals as the coronavirus death toll soared.

The Bolsonaro government drew widespread international condemnation last summer as ranchers and land-grabbers, emboldened by the administration’s weakening of environmental enforcement agencies, burned millions of acres of pristine rainforest. The fires cast deforestation in a new light on the world stage, popularizing the stark reality that felling trees in the world’s largest absorber of climate-changing gases risks global catastrophe far beyond Brazil’s borders.

The blazes marked another kind of disaster for the hundreds of Indigenous tribes that have lived in the Amazon long before the arrival of Europeans. Under past governments, Brazil conserved its forests in part by empowering the tribes who lived there to assert sovereignty over the land, working closely with environmental enforcement agents to root out illegal logging and wildcat mining.

Bolsonaro, in one of his first moves as president, tried to shift control over Indigenous territory to the Ministry of Agriculture, an agency controlled by agribusiness interests that profit off expanding cattle ranching and soy production onto acres once thick with biodiversity. The murders of Indigneous teenagers, chieftains and activists soared in 2019 as land-grabbers seized on the new government’s indifference to ― or even tacit approval ― of exploiting protected territory.

COVID-19 brought a new kind of horror for Indigenous Brazilians. More than 100 members of Indigenous tribes have died after contracting the virus, according to data from the Brazilian Indigenous Peoples Association, which has said the number is likely higher than the group or the government has counted officially.

Rates of deforestation in the Amazon over the first four months of 2020 are also up more than 50% from a year ago, according to Brazil’s national space agency, which monitors the forest. That has raised concerns that illegal miners and loggers could spread the coronavirus to even more Indigenous tribes, including those who have no known contact with the outside world.

Environmental monitors are also concerned that Brazil could experience an even worse outbreak of fires this year.

But inside Brazil’s conspiracy-minded government, Bolsonaro’s ministers have only continued to peddle even more outlandish theories as the pandemic spreads. During the April 22 Cabinet meeting, Human Rights Minister Damares Alves said that she traveled to the Amazon region that month because “people” were deliberately infecting Indigenous Brazilians with COVID-19 in order to make Bolsonaro look bad.

“They needed to kill more Indians,” Alves said, “to say that our policy was not working.” 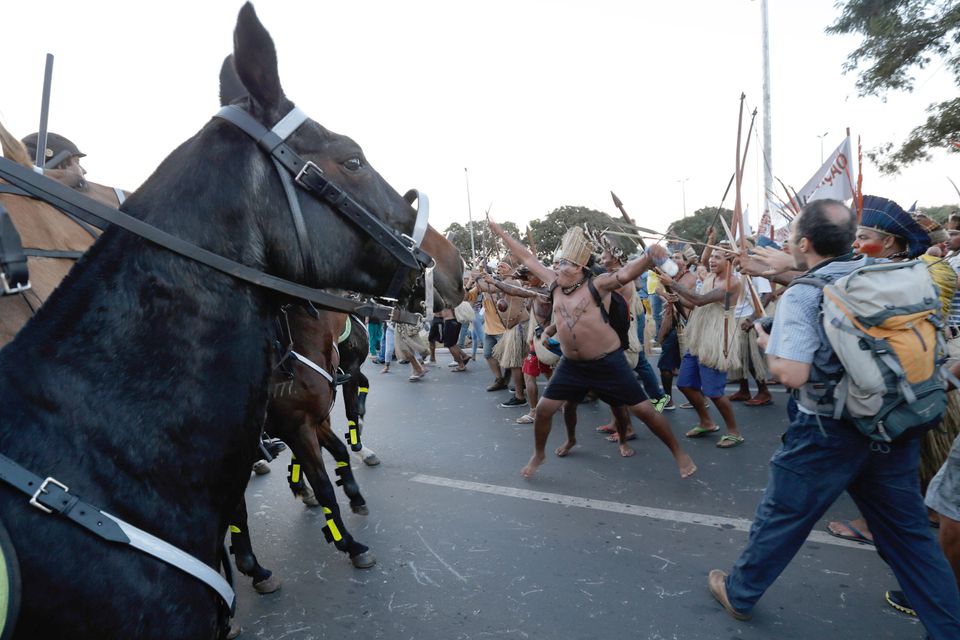