When you think about the deadliest animal in the world, what immediately springs to mind? Sharks? Hippos? Crocodiles? While these animals may look the part, the biggest killer amongst us is much more inconspicuous, and it can deliver that one potentially fatal bite without you even noticing. I am of course referring to the mosquito. Mosquitoes kill more people each year than all other animals combined, and on average they kill even more people than humans do. It is estimated that over 1 million people die per year from mosquito-borne diseases, such as Malaria and Dengue Fever, and millions more endure pain and suffering.

Tackling this problem has proved a formidable task in the past, but a very small U.K.-based company called Oxitec has been developing and implementing an exciting and cost effective technique that could help curb vector-borne diseases in problem areas without the negative environmental impacts that other approaches often bestow. This sustainable technique, which involves the release of “sterile” insects into the wild, has already proved a success story in several dengue mosquito trials in different areas of the world, and it can also be applied to control other insect problems such as agricultural pests which risk food security. Furthermore, a factory in Brazil is set to be opened next week in order to raise and release these mosquitoes on a commercial scale in order to tackle Dengue Fever.

Dengue FeverDengue Fever is the fastest-growing mosquito-borne disease in the world; incidence has increased 30-fold over the last 50 years, and currently it affects around 50-100 million people each year and causes around 25,000 deaths. It’s a viral disease spread primarily by two species of mosquito; Aedes aegypti and Aedes albopticus, although the former is responsible for the majority of transmissions. Dengue is sometimes nicknamed “breakbone fever” because of the agonizing bone pain associated with the illness, and severe cases may result in the often fatal manifestation dengue hemorrhagic fever.

Currently there are no vaccines or effective antiviral drugs, meaning that mosquito control is the only viable option to control the disease.

Mosquito Control TechniquesDengue mosquitoes may bite at any time of the day, unlike the malaria mosquitoes (Anopheles) which generally bite at night time. This means that mosquito nets aren’t going to curb infection. One possible solution is the use of insecticidal aerosols which are dispensed across infested areas, but this reactive response is far from ideal because the chemicals can persist in the environment and cause problems, and non-target species will undoubtedly also be affected. Resistance also often develops over time, rendering the chemicals useless.

Another way to control mosquitoes is the environmentally benign Sterile Insect Technique (SIT). This initially involved blasting mosquitoes with radiation in order to induce sterility, but this often damages the insects, meaning that many won’t go on to mate when released. While this may be an option for other, larger insects, it has proved for mosquitoes.

Genetically Modified MosquitoesOxitec’s solution is an advancement of SIT, which involves the insertion of a lethal gene into male mosquitoes that prevents them from being able to successfully reproduce. Although the insects are not truly sterile, they can be considered sterile because they die before reaching sexual maturity. Released “sterile” males will therefore seek out females to mate with, competing with wild males, and the resultant progeny will contain the lethal gene and therefore die before they can mate. If a sufficient number of mosquitoes are released, the females will be more likely to find a “sterile” male, and a substantial drop in population can be achieved in a remarkably short period. The flight range of dengue mosquitoes is also around only 200 yards and they’re restricted to urban areas, making it easy to control populations with this technique as “zones” of release can be established to ensure sufficient area coverage.

The sophisticated yet simple system also involves the insertion of a fluorescent tag called DsRed that allows careful monitoring of mosquito populations after initial release; a “track and trace” system, says Hadyn Parry, CEO of Oxitec. This means population control can be maintained over time through repeat release, which will be guided by monitoring fluorescent mosquito levels. The technique doesn’t necessarily eliminate mosquito populations; rather it keeps them at such a low levels that disease transmission no longer occurs. Within many dengue areas, the mosquitoes are actually an invasive species that shouldn’t be there anyway, and have entered the area by hitch-hiking on boats or planes. 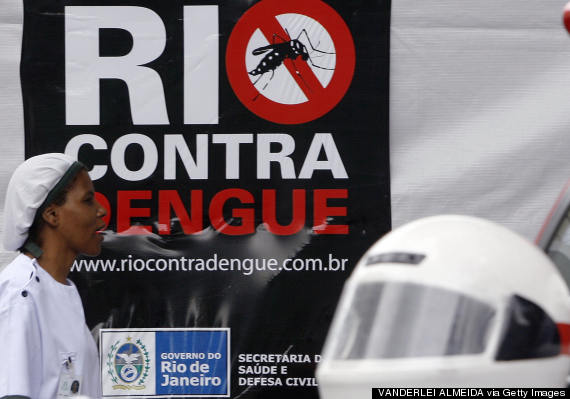 What if the genes stop working? Oxitec have so far looked at around 150 generations of GM mosquitoes and no resistance has been seen- the gene is stable. If the gene somehow does stop working in the field, this can be easily picked up by monitoring levels of fluorescent mosquitoes.

Should We Be Worried About These Mosquitoes?The phrase “genetically modified” immediately rings alarm bells for many, and the controversial legacy of GM crops means it’s a no-brainer for some to immediately dismiss these insects as potentially dangerous “franken-mosquitoes” that could do more harm than good. But these GM mosquitoes are the opposite of GM crops. GM crops are designed to have advantageous traits that persist, and one concern of GM crops is the potential for hybridization with other plant species that could result in a loss of diversity and ultimately control. The Oxitec mosquitoes, however, are designed to have negative traits that won’t persist since they all die; it’s a dead-end system that can’t be picked up by other species.

The lethal genes inserted into the mosquitoes also cannot be passed onto humans, and the protein produced is non-toxic to us and isn’t found in their saliva, therefore the technique is safe. According to Parry, the environmental consequences are also negligible, and assessments are made prior to release in an area to examine whether the mosquito is a keystone species, i.e. if it is critical to the food chain of another species.

Success So FarOxitec’s dengue mosquitoes have so far been trialed in the Cayman Islands, Brazil and Malaysia, and within four months of release the A. aegypti populations were reduced by 85 percent. A trial in Panama was also initiated in May which will hopefully yield similar results.

Back in April, following successful trials that resulted in a 96 percent reduction in dengue mosquitoes, the National Technical Commission for Biosecurity (CTNBio) in Brazil approved the commercial release of Oxitec’s GM dengue mosquito, meaning that they can produce and release mosquitoes themselves. A factory is set to be opened next week in Campinas, New Scientists reports. As part of an expanded research program, Oxitec's mosquitoes will be released in Jacobina, Bahia, and if approval is granted by the Brazilian Health Surveillance Agency, a larger release will ensue. Bahia is just one of many areas plagued by Dengue, and a state of alert is in force in 10 rural districts.

Scaling-up these programs is simple; a coffee cup sized container contains about 3 million eggs, so tackling larger areas in future projects shouldn’t pose problems, and after an initial couple of months of training in monitoring the responsibility can be passed on to local health authorities.

Alternative Techniques To Eliminate DengueWhile Oxitec is the only company advancing GM mosquitoes, other groups are trialing alternative methods in order to reduce mosquito-borne diseases. One such example is the Eliminate Dengue (ED) research program which aims to investigate whether naturally occurring, harmless bacteria called Wolbachia can reduce the ability of mosquitoes to transmit dengue between people.

Wolbachia is estimated to be naturally present in around 60 percent of insect species, but not the mosquitoes involved in malaria and dengue transmission. It has been demonstrated that when present in A. aegypti, Wolbachia blocks dengue virus transmission by these mosquitoes, although there exists some confusion over the exact mechanism behind this.

Similar to the GM mosquitoes, projects will involve the controlled release of mosquitoes into dengue areas. These Wolbachia infected mosquitoes will breed with wild mosquitoes and consequently spread Wolbachia throughout the insect population. Laboratory tests have also shown that Wolbachia infections may also reduce the transmission of other viruses such as yellow fever. ED trials are currently underway in several countries, such as Indonesia and Australia.

One possible drawback associated with this method is that over time, the mosquitoes could adapt to infection and the protection against dengue may wear off.

Other ApplicationsThe ever-growing human population is a burden on our resources, and food security for future generations is a problem. Oxitec are currently working on producing sterile insects to tackle agricultural pests that can damage crops, which threatens food quality and quantity.

Oxitec would also like to be able to apply their technique to the Anopheles mosquitoes that carry malaria, although since several different species transmit the malaria parasite it is a slightly more complicated situation.

Hopefully with continued efforts, implementation of this sustainable technique will result in positive changes to growing worldwide problems such as dengue fever that threaten the lives of so many people.

This article also appears on IFLScience.com