The official countdown to the 2014 FIFA World Cup Brazil began on Wednesday, June 12. Stadiums are being revamped, public transport is being tweaked, businesses are gearing up and prostitutes are taking free English classes. Yes, you read that correctly.

In Belo Horizonte, one of the 17 host cities for the event which is expected to draw about 600,000 international visitors, citizens working in one of the world’s oldest professions are learning a very specialized kind of English.

In preparation, the Minas Gerais State Association of Prostitutes in Belo Horizonte is offering free English classes to help the city’s prostitutes make the most out of the onslaught of potential new clients.

The association’s president, Cida Vieira, says the goal is to enable sex trade workers to better communicate with customers. “English will be very important to communicate with clients during the Cup,” Vieira said. “They’ll have to learn how to work out financial deals and also use a specialized vocabulary with sensual words and fetishes.”

There are over 80,000 prostitutes in Belo Horizonte and approximately 4,000 are association members. But not everyone is happy about it, and the Brazilian government has come under recent fire, as all eyes begin to focus on the host country of the 2014 World Cup and the 2016 Olympics.

An online ad campaign launched by the Brazilian government’s Ministry of Health that was intended to educate the public about sexually transmitted diseases and reduce social prejudice by putting a positive spin on the profession instead angered media and human rights groups.

The campaign, which featured photos of prostitutes with taglines such as “I’m happy being a prostitute” and slogans like “I can’t be seen without a condom, my love” was removed from the government website following harsh and widespread criticism. “I do not think this is a message the ministry should be sending,” acknowledged Brazilian Minister of Health Alexandre Padilha and said that the ministry should focus on messages that “provide orientations on how to prevent STD’s.”

For the sex workers in Belo Horizonte, however, 300 have already signed up for the free English classes and many more are expected to do the same. They are also considering offering classes in Italian and French. Vieira points out that, despite the negativity associated with the profession, sex workers need to be prepared. “This is important for the dignity of the work, the women need to be able to negotiate a fair price and defend themselves,” she said. 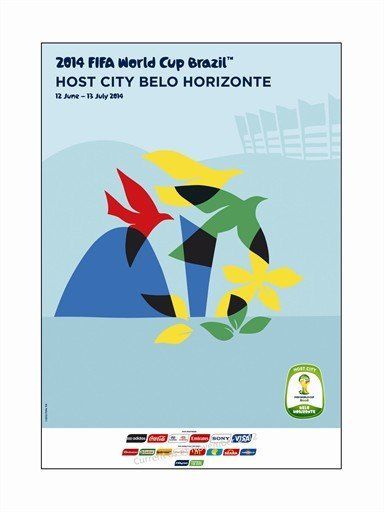 1 / 12
Belo Horizonte
"Our poster depicts the silhouette of the Church of São Francisco de Assis, which is brought to life by the overlapping pentagons which define the ball’s shape. It portrays the balance of nature and art and the celebratory welcome that athletes and football lovers all over the world will receive <a href="http://www.fifa.com/worldcup/destination/cities/city=6783/poster.html">when they come to Belo Horizonte."</a>
FIFA Official Website