"Come on, white guy, give me a break!" is the title of a campaign orchestrated by black students from the University of Brasília (UnB, Universidade de Brasília), the first Brazilian state university to implement affirmative action-based quotas.

A law introduced countrywide in 2012 reserved 50 percent of spots in the country's 59 state universities for students of black, mixed and indigenous backgrounds, as well as students from the country's public education system. While over 50 percent of Brazilians identify as black or mixed-race, Brazilian universities have historically drawn most of their students from the 12 percent of the population who are privately educated, a primarily white, financially privileged group. Less drastic affirmative action efforts have been undertaken over the past decade at various Brazilian educational institutions, but the 2012 racial-quota mandate is the broadest such measure in Brazil's history.

Disparities in social status, salaries and living conditions suggest that poverty is intimately related to skin color in Brazil. While 50 percent of the Brazilian population is comprised of black people, 67 percent of the population of Brazil's infamous favelas, or slums, is black.

The law imposing racial "quotas," which has given universities until 2016 to alter their student population to better reflect Brazil's ethnic composition, has generated controversy--and backlash which is at times directed against enrolled black students.

Lorena Monique dos Santos, the student who originally organized the campaign through the social media site Tumblr, used the hashtag #ahbrancodaumtempo ("hey white guy, give me a break") to give fellow black students a chance to illustrate the alienating, subtly racist comments directed against them on a daily basis.

Dos Santos, who studies Visual Anthropology, said she got inspired by a project from Harvard University called 'I, Too, Am Harvard', which aimed to highlight the experiences of black students on Harvard's campus.

During an interview with BrasilPost, dos Santos compared the prejudice experienced by black people in the US and Brazil:

"I don't live under the same conditions as black people in the USA or in South Africa, where the racist systems are much more visible and there is an actual segregation between black and white communities," she said. "But with regards to racism in Brazil, I see that it makes black people very confused. It feels like we are walking through a minefield without knowing exactly what is happening to us." Here are photos from the anti-racism campaign, which include translations of the statements students have made: 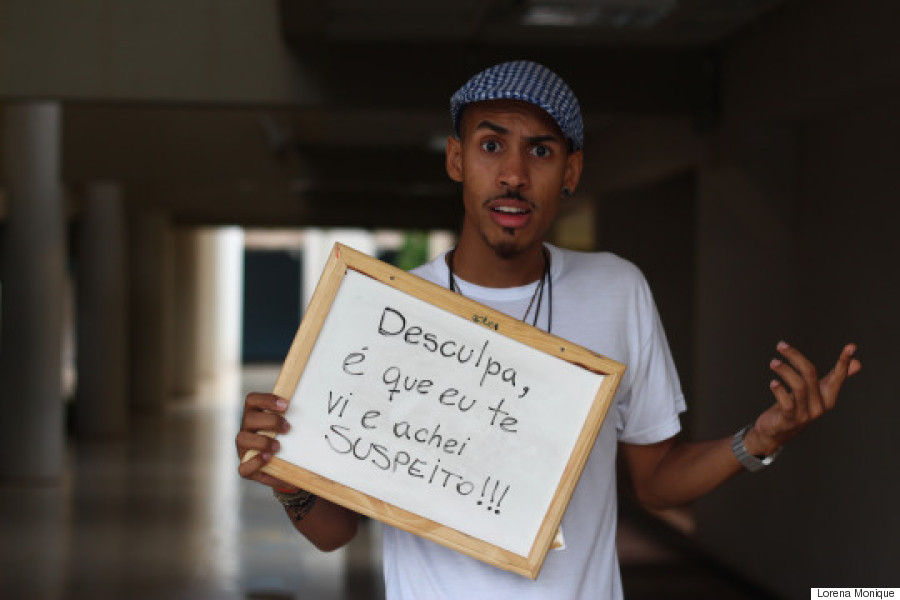 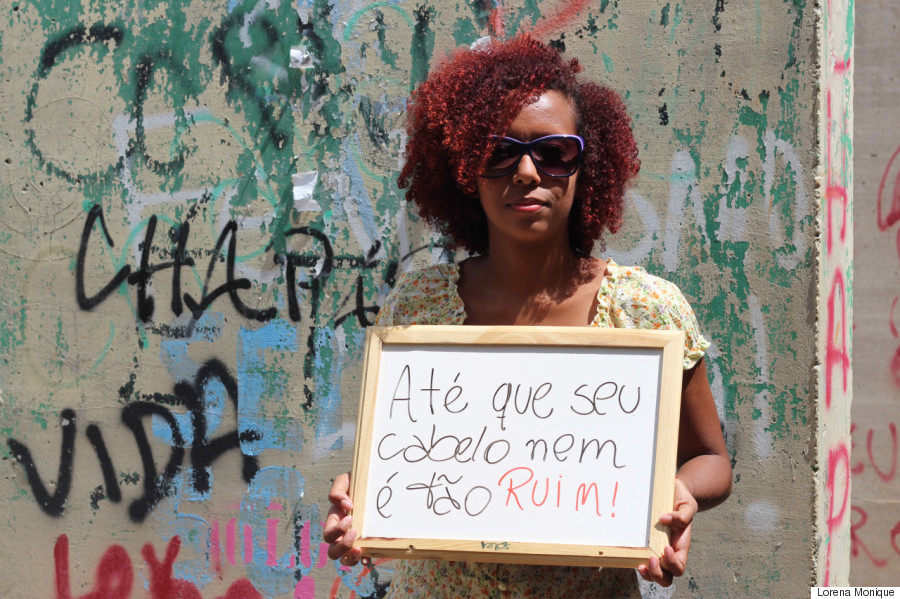 Image 2: Your hair is not that bad! Lorena Monique dos Santos/Tumblr

"We see black people having the worst salaries and occupying the least valued job positions," dos Santos told BrasilPost. "We grow up without seeing people that look like us on TV, and yet we keep hearing every day that racism does not exist in Brazil. And the worst part is, many black people believe this! This is something that confuses and divides us.' 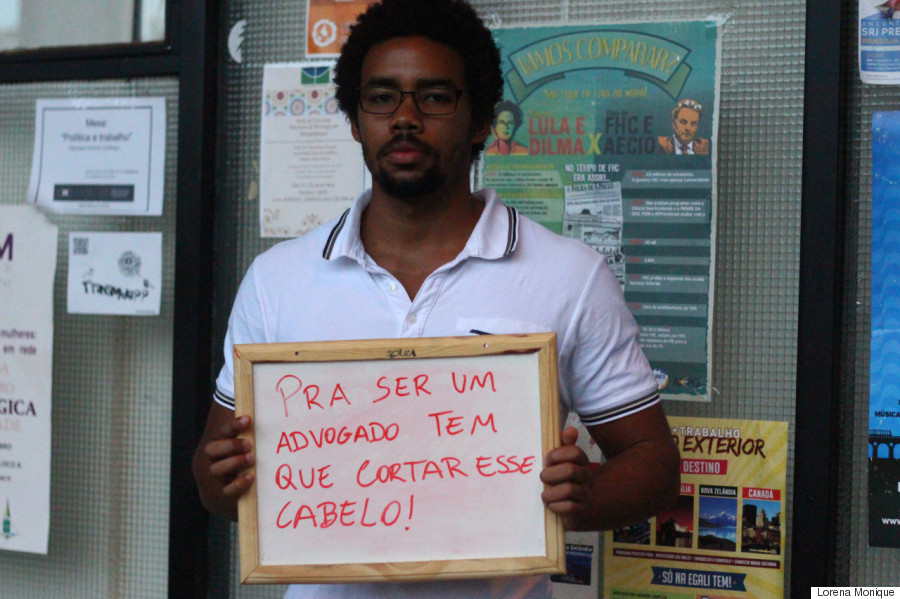 "If you want to be a lawyer, first you better have a haircut." Lorena Monique dos Santos/Tumblr 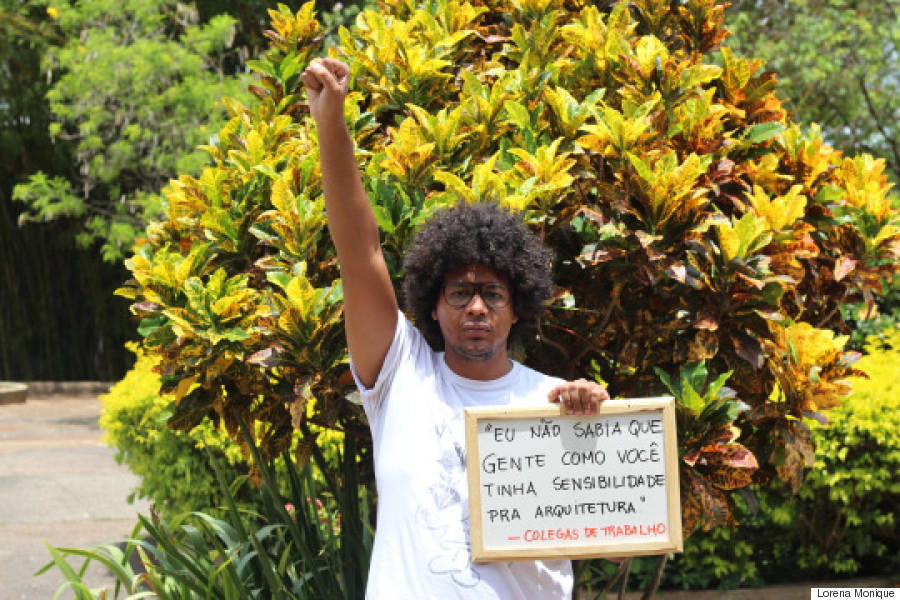 "It is impossible to believe that the social and racial segregation that has been happening during 388 years of slavery, in addition to 115 years without any restorative policies, can be fixed with only 10 years of affirmative action. These quotas are an emergent, superficial measure, as they only cover the part of the population that manages to finish middle and high school, leaving out the most fragile parts of the black population." 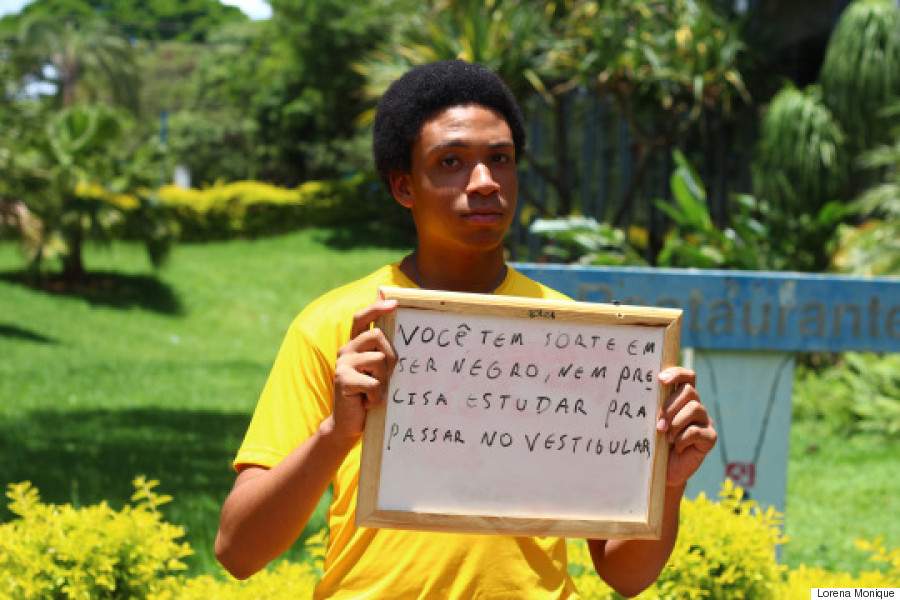 "You're lucky for being black. You don't even need to study to enter college." 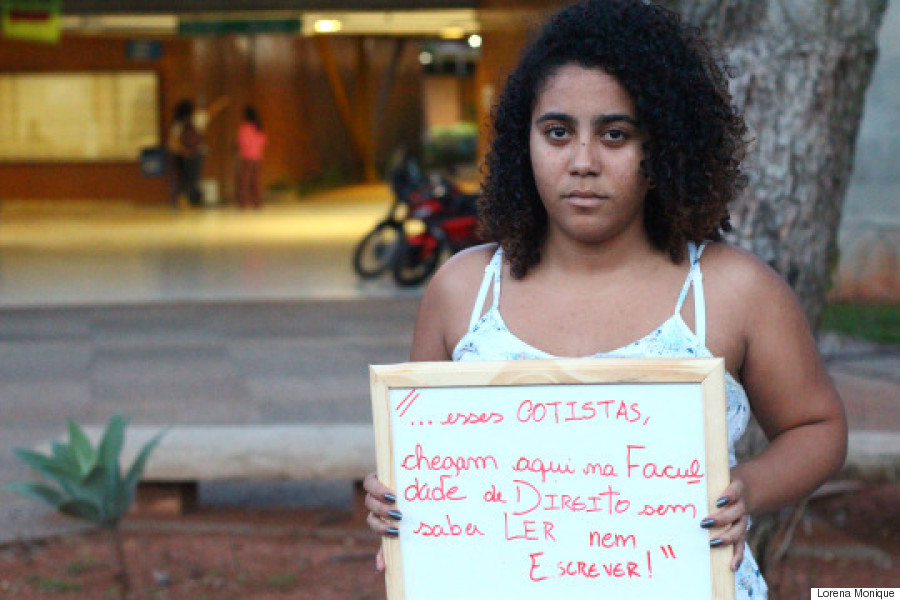 "'... Those who are dependent on racial quotas come to law school without even knowing how to read or write!'"

Lorena believes the efforts against racism are still indispensable nowadays in Brazil due to the "illusion of racial democracy" --a phrase made famous by the sociologist Gilberto Freyre in the 1930s.

"I believe anti-racism efforts are important so that people can perceive there is social segregation between different ethnic groups that form the population in Brazil, and look together for solutions for these problems. Honestly, my work is based on the idea of building a world where skin color, gender or any other distinguishing factors an individual might have don't matter regarding their social condition. I believe it is possible to build such a world, but we still have a long way to go."

This piece was originally published on HuffPost Brazil and was translated into English.

What the students of University of Brasilia have heard
More:
global black voicesblack voicesRacismbrazil-racismBlack Students
Trending